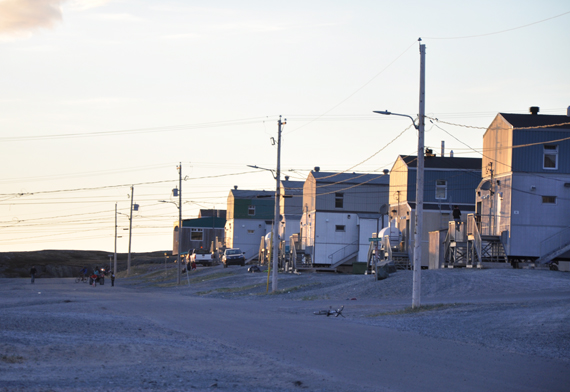 A new study of public housing in Nunavut and Nunavik shows that, along with living in a better place, the presence of children seems to provide protection against psychological stress. (FILE PHOTO)

One of these two studies, presented at last week’s International Congress on Circumpolar Health in Copenhagen, also produced an interesting finding about public housing: that, for mental health, who you live with is more important than the number of people in your household.

And children go hand-in-hand with housing in improving mental health concludes the study by Karine Perreault of the Université de Montréal, who looked at the links between moving to a new housing unit and mental health.

For Perreault’s research, she looked at factors such as the number of people per household and whether they were children or adults, in addition to the impact of living in improved housing.

She found those who lived in higher levels of crowding before moving to a new public housing unit had less mental distress.

But if there were more adults in the household, even in improved housing, that led to more distress, she found.

The results of her interviews suggest that having fewer adults and more children in public housing units may lead to beneficial effects on mental health, because children promote healthier behaviour, she said.

So, she said that choosing who you live with and having children around could be important factors in public housing policy in the North.

But eliminating overcrowding may not be the only issue to consider.

Public housing can promote health if “they allow for household rearrangements that allow for people’s will and they are conducive to protective social dynamics”—that is, fewer adults and more children, Perreault said.

Another study led by Mylène Riva from McGill University examined information provided by 200 adults who lived in 12 communities in Nunavut and Nunavik.

They answered questions before moved into new public housing and then at about 18 months after moving, to see how they felt. The results suggest that asthma and stress levels, among other things, improved, but their food security and general health did not.

She concluded that more housing can contribute to improving well-being in Nunavik and Nunavut, particularly when the links between housing and health are maximized.

According to the Canadian Mortgage and Housing Corp, 3,545 households in Nunavut are in need of better housing.

Using a combination of money received from the federal government in 2016, plus money from the Government of Nunavut, the Nunavut Housing Corp. will build 220 badly needed new social housing units this year and next.

Nunavik’s most recent housing survey shows this region needs another 813 units to accommodate its growing population, which is estimated to increase by about 110 families every year.

A new five-year tripartite housing agreement provides for $25 million a year from the federal government. That will result in the construction of between 65 and 75 houses a year, depending on the number of bedrooms.