“It’s a matter of cost and of effort” 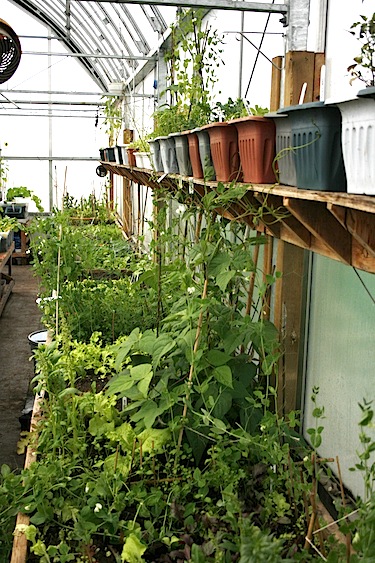 Iqaluit’s community Piruqsiavut greenhouse has been in operation for six years. (FILE PHOTO)

The North could benefit from commercially run, year-round greenhouses.

That’s the message which Heather Exner-Pirot from the International Centre for Northern Governance and Development at the University of Saskatchewan said came out of a two-day workshop which took place in Saskatoon Nov. 7 and Nov. 8.

Participants at the sold-out workshop, called “Northern Food Security: The Greenhouse Solution,” looked at how northern greenhouses can help provide healthy and affordable food to communities, and, in turn, contribute to lowering food insecurity.

“I was surprised to find there weren’t any economically viable greenhouses in the North,” Exner-Pirot told Nunatsiaq News in an interview this week.

The workshop, in held in partnership with the University of the Arctic, a network of colleges, universities and institutions across the circumpolar region, reflects the growing interest northern greenhouses, Exner-Pirot said.

Community greenhouses, such as the one in Iqaluit, are great, but many are eager to make the move to economically-sustainable, year-round commercial greenhouses, she said.

That could be made possible with:

• advances in glazing and insulation to reduce energy costs; and,

• use of alternative energy, such as wind power or wood or woodchips.

Although soil is hard to come by in Arctic, commercial greenhouses could introduce a composting system that would also divert and use biological waste, and reduce landfill waste, Exner-Pirot said.

“It [the necessary technology] exists, it’s a matter of cost and of effort,” she said.

Currently, there are community greenhouses in Yellowknife, Iqaluit, Whitehorse and Carmacks in Yukon, and Kuujjuaq in Nunavik.

However, Exner-Pirot acknowledges the challenges of trying to run a commercial greenhouse in the North — a short growing season, lack of light, permafrost, and high costs.

But Exner-Pirot said she can’t think of any other hurdles to establishing a commercial northern greenhouse.

The payoff: you would get to eat your own vegetables.

And working in greenhouses increases nutrition education and knowledge about how to grow vegetables, she said.

Children could also get involved in helping out with greenhouses, she said, because “it makes science relevant to kids in the North.”

A greenhouse, as an “oasis, a happy and healthy place,” can also very therapeutic, Exner-Pirot suggested.

For now, people are learning more about gardening in the North and learning from their mistakes, she said.

When asked about how the costs of running a commercial greenhouse in the North could impact on consumer prices, Exner-Pirot said that it wouldn’t make vegetables any more expensive than they are today.

“Is that more expensive than the Nutrition North program? The status quo isn’t working,” she said.

People in the North need to start learning more about growing food because “the answer can’t [always] be to eat off the land. It has to change.”

“The fact is people are buying potato chips and coke,” Exner-Pirot said.

A report will likely be released next month outlining how to get started on running a northern greenhouse, with the aim of helping people decide whether or not a greenhouse is the right decision for their community.