Tubules in tusk sense changes, relay information to the brain 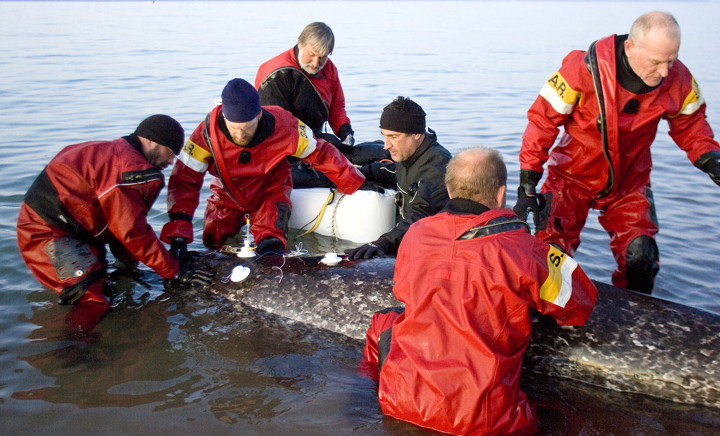 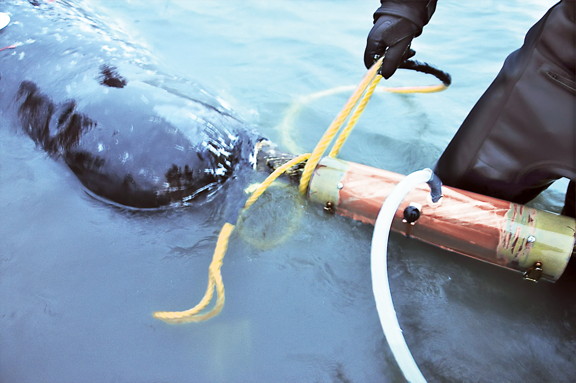 A close-up of the “tusk jacket” with which researchers tested the sensory capabilities of the narwhal tusk. (PHOTO COURTESY OF MARTIN NWEEIA)

Narwhal tusks have always been a bit of a mystery — but part of that mystery has now been revealed.

A narwhal tusk is actually an ivory tooth that grows from the left side of the animal’s jaw and through the lip, but the question, if you’ll pardon the pun, has persisted: what’s the point?

Martin Nweeia has been studying the unicorns of the sea for 14 years now and believes he finally has an answer.

The part-time Harvard dental instructor and principal investigator of Narwhal Tusk Research is confidant the exotic whales use their tusks as a sensory device.

“There’s a good sensory pathway that’s drawn out between basically the outside of the tusk and the brain,” Nweeia said from Connecticut, where he’s based.

“So there’s definitely processing of information there,” Nweeia said.

That means the tusk is used to detect something — Nweeia has some ideas on what that is, but the purpose of the tusk is still largely unknown.

What Nweeia found by studying tusks in Nunavut was that a ligament that’s normally found inside teeth — called cementum — was found on the outside of the narwhal tusk.

That cementum has “porous channels” in it.

“It’s almost like a sponge,” Nweeia said, that detects its surroundings.

Tubules connect the outside to the inside, where the nerve and blood supply is located, and eventually the nerves go to the brain.

But “it’s one thing to map out the whole anatomical pathway, it’s another to prove it actually exists,” Nweeia said.

That’s why he and a group of scientists tested the theory on narwhals at Tremblay Sound on northern Baffin Island while Fisheries and Oceans Canada were tagging the animals.

They snagged six narwhals between 2010 and 2012 and slid on a sleek two-foot plastic sleeve called a “tusk jacket.” Through that, they pumped fresh water and salt water on the narwhal’s tusks, several times.

The narwhal’s heart rate rose when salt water was applied, and dropped when fresh water was put on.

That proves the tusks can sense things. Mystery solved? Well, sort of. Why do narwhals need sensory receptors on their tusks, of all places?

Nweeia said it could be to seek females who are hanging out in different gradients of water. It could be to help sense and capture certain food.

Or it may support the conventional theory that the tusk, most often found on males, is used for sexual selection — females are attracted to the largest tusk, a conclusion Charles Darwin arrived at in the 1800s.

Or, Nweeia said, it could be all of the above.

“Look at our teeth. We could say our teeth are used for chewing and biting our food, right?”

“But if someone attacked us from behind and held us, we might use our teeth to bite them, to get free,” Nweeia said.

“So I don’t have a problem with multiple uses in terms of aggression or food or however you want to associate the sensory organ.”

Nweeia said there must be a reason why narwhals — mostly males but some females too — are genetically evolved to grow the tusk.

He said of 16 potential teeth in the narwhal, 12 are genetically silenced at birth — teeth that could be used to chomp Arctic char or other fish.

Instead, the whale forms a tusk.

“There must be a pretty compelling reason why an animal could do this,” Nweeia said.