Review board set to hear Norway’s claim to the Maud 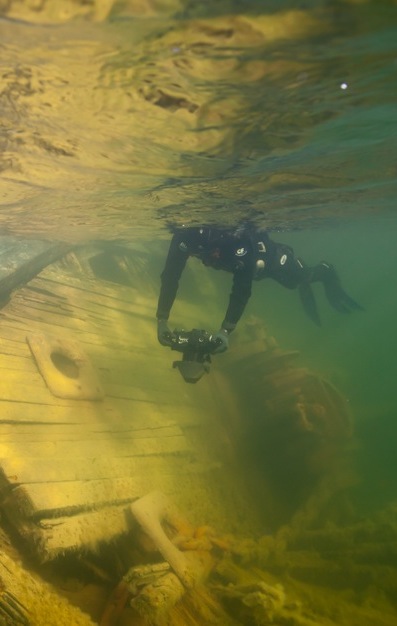 This how the Maud’s hulk looked from underwater last August when Jan Wanggaard and a diver visited Cambridge Bay. (FILE PHOTO) 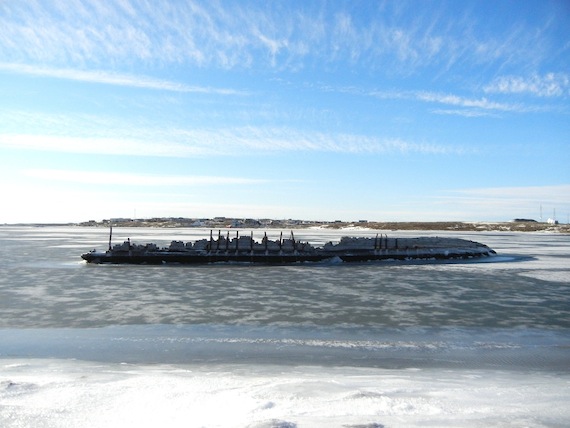 Norwegians still want to bring the hulk of a ship once sailed by their home-grown polar explorer back to Norway from Cambridge Bay, Nunavut (shown here in September 2011). (PHOTO BY JANE GEORGE)

It’s been more than 100 years since Norwegian explorer Roald Amundsen sailed the Maud into the western Arctic, where it ended up sinking some years later in the waters off Cambridge Bay.

But the ship is still making waves.

On March 15, Canada’s cultural property export review board will meet in Ottawa to review a previous decision by the Canadian Border Services Agency to deny an export permit to a Norwegian group that wants to tow the half-submerged wreck of a ship off the shore back to Norway.

Last December, Canadian Border Services Agency turned down a request for a federal export permit for the Maud, once sailed by Amundsen, the first European adventurer to travel the Northwest Passage in 1906 and the first person to reach the South Pole December 1911.

Amundsen had sailed the Maud on an unsuccessful attempt to sail through the Northeast Passage, then drifted in the ice towards the North Pole.

Now a group of Norwegian investors wants to raise the Maud with balloons, drag the hulk over to a barge and then tow it from Nunavut back to Norway — a 7,000-kilometre journey.

But here’s the reason for the refusal of the permit: Canadian Heritage’s expert examiner recommended the Maud was of “outstanding significance and national importance to Canada,” as set out in Section 11 of the Cultural Property Export and Import Act.

So Canadian Border Services Agency decided a full archeological study must be be conducted on the wreck before it can go anywhere — a condition that came as unexpected news to Jan Wanggaard, the manager of the project “Maud Returns Home.”

Now Wanggaard, whose group appealed that decision, has 20 minutes before the review board to defend his plans for the Maud.

“Basically we will just try to present our project from the beginning,” Wanggaard said March 11 in an interview from Ottawa.

Wanggaard said he feels that they’re the only ones with a concrete plan to deal with the ship, which legally belongs to them.

“There is no doubt everybody who knows our plans agrees they are good — and the second thing is that no one else has other plans.”

Wanggaard said he’s focused on saving the ship as it is today.

The archeological study that Canadian Heritage wants to see would be of “marginal value” and “incredibly” difficult and time-consuming to carry out, he said.

In any event, Wanggaard said he doesn’t want to destroy the Maud, but wants to salvage it.

After hearing the appeal arguments, the review board could direct the permit officer to issue a permit to the Norwegians without further delay.

However, if the board agrees with the expert examiner from Canadian Heritage that the ship is of “outstanding significance and national importance,” it may set an export delay period, from two to six months in length.

During that period, Canadian institutions and public authorities could buy the Maud from its Norwegian owners, with the possible assistance of a “Movable Cultural Property Grant” from Canadian Heritage.

If no offers to purchase the ship are made by the end of the delay period, the Norwegians will be issued a permit on demand.

“We cannot imagine that there’s anyone who can take over this ship and do what we want to do,” said Wanggaard, adding that “everyone agrees this ship is more important to Norway than to Canada.”

No matter what happens, plans to move the Maud will be postponed by a year, he said.

A group of Cambridge Bay residents has lobbied to keep the sunken hulk of the Maud — better known to them as the Baymaud, the name given to it by the Hudson’s Bay Co. — in the waters outside their community.

They formed a committee called “Keep the Baymaud in Canada” last year and circulated a petition that says the Baymaud, which sank near Cambridge Bay in 1930, is “an archaeological site that needs to be protected as she is where she is.”