Armed hold-ups throughout city “seemed like they were progressing” 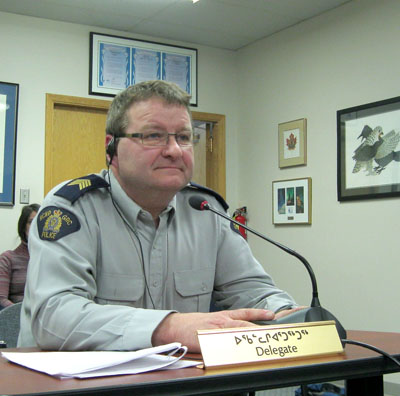 Staff Sgt. Monty LeComte of the RCMP’s Iqaluit detachment takes city councillors’ questions and listens to their concerns about the community’s recent rash of robberies at convenience stores throughout the city. Police have solved five of six incidents that took place Oct. 27 to Feb. 17. (PHOTO BY PETER VARGA)

Iqaluit City Council commended police Feb. 24 for solving an unusual rash of store robberies over the past four months.

But councillors also wondered if such incidents could become commonplace, and asked the RCMP what the city can do to prevent more from happening.

“It’s of grave concern that these things are continuing to happen, and it seemed like they were progressing,” Coun. Kenny Bell told RCMP Staff Sgt. Monty LeComte, who presented the police’s year-end crime report to council.

RCMP’s “V” Division announced earlier in the day that they have solved five of six cases of armed robbery and theft of cash at stores throughout the city.

Police charged suspects in all but one of a series of incidents that occurred between Oct. 27 and Feb. 17. RCMP believe the incidents are related.

Sgt. Yvonne Niego told Nunatsiaq News Feb. 25 that three suspects were involved in a few of the same incidents.

Evidence led police to charge one adult suspect with armed robbery in three of the cases, and theft of over $5,000 in a fourth case.

A second adult was involved in three of those same incidents — “two robberies and one theft over ($5,000),” Niego said. Police charged a third suspect jointly with the other two in one case of armed robbery, and the theft over $5,000 incident.

“It gets very convoluted,” Niego said. Police also charged two youths in a Feb. 10 robbery of a convenience store in the Plateau subdivision, which involved all of the same three adult suspects, she said.

Police are still investigating one of the six cases: an armed robbery at the Apex Road Quickstop store on Jan. 10.

Even though evidence shows most of the cases are connected, and five of the six “solved,” Coun. Bell asked Sgt. LeComte if the city could do anything to prevent such incidents from happening.

Police have already “put in place an education process” to inform retail businesses on the seriousness of armed robbery, and how to be “proactive in their approach to dealing with their staff,” LeComte answered at the council meeting.

“If the police get called to a situation where there might be a weapon involved at a robbery, we take that pretty seriously,” he said.

In a press conference just hours before the council meeting, police said cases of robbery put the public at risk, because they involve a threat of weapons or other physical violence.

“Any time there is a weapon involved, it means police will attend with weapons,” Niego said at the press conference, adding that robbery carries a “maximum punishment of life imprisonment.”

“Certainly more can be done in the area of education, and we’ve started that already, in addressing it with some of the businesses,” he said.

Coun. Romeyn Stevenson pointed to “restorative justice” as a possible way to resolve the crimes and prevent more of them from occurring.

This calls for offenders to acknowledge their crime, and repair the harm they caused according to terms agreed by the victim and offender.

LeComte said police would only consider such solutions for minor offenses.

Armed robbery “is way too serious for that as far as we’re concerned,” he said.

LeComte replied that curfew laws are hard to enforce — and recommended the city check with other municipalities that experimented with them “to see how it worked.”

“The biggest problem with curfew laws is enforcing them,” he said.

“What do you say if there’s a fine imposed, or anything like that? I know a lot of communities in the south are having trouble with that issue,” LeComte said.

Coun. Dobbin noted that some businesses have used social media such as Facebook to post videos of “crime happening.”

“Does that interfere with your investigation? What’s your opinion on that?” he said.

“I wish people would not do it,” LeComte said of the Facebook posts, adding that it could lead to “poor vigilante justice.”

“We certainly don’t want to go there,” he said.