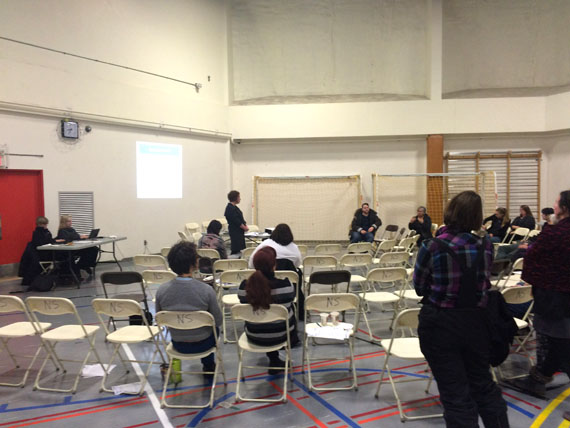 A new territorial Mental Health Act, currently under revision by the Nunavut government, must walk a fine line between respecting the rights of the individual while sometimes forcing a person to seek help.

That was one of many issues discussed Nov. 26 at a public consultation in Iqaluit held to gather input on what should be included, and what should be left out, in a new, improved piece of legislation.

“To take someone’s rights away is a very serious thing,” said the director of health for Iqaluit, Victoria Madsen, who led a presentation at Nakasuk School.

Representatives from the Department of Health and Nunavut Tunngavik Inc. attended the presentation, which offered background on the current act, grandfathered from the Northwest Territories, as well as proposed changes.

Members of the public were then invited to offer comments.

Health Minister Paul Okalik announced the Mental Health Act review in October as part of a package of remedies the government was planning to implement in the wake of the special coroner’s inquest into the high rate of suicide in the territory.

The main concern is that the act no longer reflects the realities of life in the North.

The role of elders in the current act, for example, attracted considerable debate during the Iqaluit consultation.

Under the current act, only a doctor can seek consultation with an elder for advice when determining if an Inuk has a mental illness and is at serious risk.

One of the proposed changes to the act would allow nurses to also conduct those consultations.

It’s an important change, especially in remote communities, where a doctor may not be readily available.

Most people were in favour of allowing nurses into elder consultations.

But then some questioned the definition of elder, as it now exists in the act.

“For mental health, there are elders I know that I wouldn’t want to talk to,” said one member of the public, who went on to suggest some form of screening for elders prior to making them eligible to consult on mental health issues.

“Some people are nervous about elder authority. The terminology is inexact,” said NTI health and policy analyst Kiah Hachey.

“There’s a difference between an elder and an old person… I’ve come into contact with both,” said one participant.

Most people agreed that the current two-day limit on confining an individual in advance of a mental health assessment may not always be enough.

This would concern mostly remote communities, where a doctor may not always be around to conduct the assessment — or if weather, travel or other variables prevent a specialist from reaching someone in a crisis.

But members of the public also had concerns about extending that period of confinement if, in remote communities, the only place patients could be safely held turned out to be a jail cell.

There appeared to be strong support among people attending the Iqaluit meeting for instituting “community supported treatment orders” on certain individuals released back into society with known mental health challenges.

Such an order would place oversight on the individual to ensure they comply with certain conditions, such as taking medication and avoiding relapses that might lead to crises for families and communities at large.

These types of orders are common in southern Canada but Nunavut’s Mental Health Act does not currently provide for them.

The Iqaluit consultation on the Mental Health Act was one of 11 visits conducted throughout Nunavut.

The public’s input will be used to draft an outline of common ground gathered during the review phase.