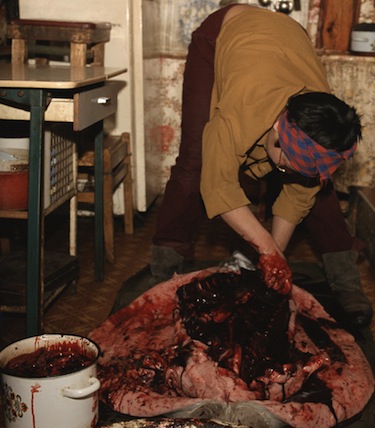 A Chukchi woman in Uelen, Chukotka prepares a seal. The Chukchi live side by side with a small population of Yupik Inuit in Chukotka who are among the northern indigenous peoples represented by RAIPON. (FILE PHOTO)

The Russian Association of Indigenous Peoples of the North is asking concerned people and organizations around the world to send letters of support to Russia’s president, prime minister and justice minister.

“The Russian Association of Indigenous Peoples of the North needs your support regarding the unjustified suspension of its activities by the Russian Ministry of Justice,” said its vice-president, Dmitry Berezhkov, in an open letter circulated Nov. 27.

Berezhkov wants to see these officials reinstate RAIPON, which represents more than 250,000 indigenous peoples in northern Russia and sits as a permanent participants in the Arctic Council.

Russia’s move to suspend RAIPON’s activities on earlier this month on the grounds that its activities are “illegal,” has already received criticism from Canada, Norway, Greenland and international non-governmental organizations, including the Arctic Council, which also asked for RAIPON’s reinstatement.

The letter-writing campaign is the only option left to RAIPON to protest its suspension, Berezhkov said.

“We consider this an attempt to divide the indigenous peoples’ movement in Russia and replace it instead with a subservient organization willing to agree to decisions that are in fundamental contradiction with the vital interests of indigenous peoples,” he said.

Berezhkov also said he hopes the Supreme Court of the Russian Federation will impartially consider RAIPON‘s appeal against the Russian ministry of Justice’s decision and that RAIPON will be permitted to resume its activity.

Berezhkov suggests sending a letter of support for RAIPON to Russian President Vladimir Putin, which can be sent online in English here.