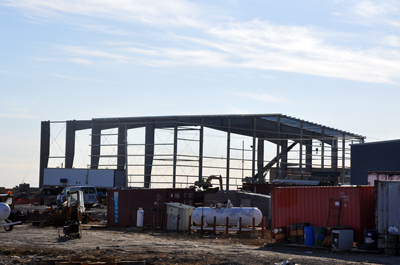 Sakku Investments Corp. built this new hangar at the Rankin Inlet airport earlier this year, which has now been leased out to Calm Air under a new agreement. (PHOTO BY SARAH ROGERS)

Sakku Investments Corp., the business arm of the Kivalliq Inuit Association, has walked away from its partnership with Makivik Corp.-owned First Air and teamed up with two regional airlines.

Sakku, formerly a majority owner of Sakku Aviation Ltd., announced Sept. 5 that it has already entered into a joint venture with Exchange Income Corp. and its subsidiaries Calm Air and Keewatin Air in order to offer better services and benefits to residents of the Kivalliq.

“We decided to try this new relationship,” said Sakku’s president and chief executive officer Patrick Tagoona. “[Calm Air and Keewatin Air] have been providing services in the region for many years, so it really made a lot of sense.”

The joint venture was initially created to provide air transport to the mining industry working in the Kivalliq region, but eventually picked up the lion’s share of the Government of Nunavut’s freight contracts in 2012, along with its Baffin counterpart, Qikiqtani First Aviation.

But Tagoona pointed to First Air’s recent decision to cut service to Repulse Bay (Naujaat) as one of the factors in its decision to end its relationship with First Air.

“This was obviously something we weren’t happy about,” he said. “It’s important that we service each of our communities.”

Tagoona said that merger talks between First Air and Canadian North did not factor into Sakku’s decision.

Under the new agreement, Calm Air has entered into the long-term lease of a new aircraft hangar at the Rankin Inlet airport, currently being constructed by Sakku Investments.

The hangar should be ready for occupancy by the winter, Tagoona said.

The Winnipeg-based Exchange Income Corp. said the hangar is one example of infrastructure sharing that will allow Calm Air to better service its customers in the Kivalliq region and expand its northern operations.

“Virtually everything we do in the North, we’ll be working with Sakku to see if there’s an opportunity to collaborate,” said Mike Pyle, the corporation’s CEO.

In addition to the aviation industry, Sakku Investments, which launched in 1989, has investments in regional mining, health and real estate portfolios.