“We are so fortunate to have the Arctic” 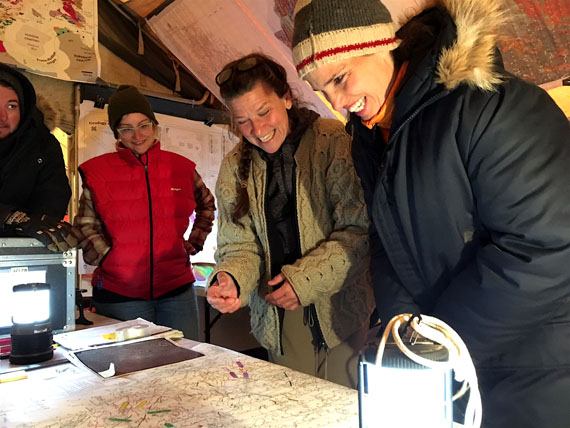 Science Minister Kirsty Duncan, right, with Mary Sanborn-Barrie of the Geological Survey of Canada. Duncan recently visited a group of scientists who are doing geological mapping on Somerset Island and the Boothia Peninsula. (PHOTO COURTESY OF INNOVATION, SCIENCE AND ECONOMIC DEVELOPMENT CANADA) 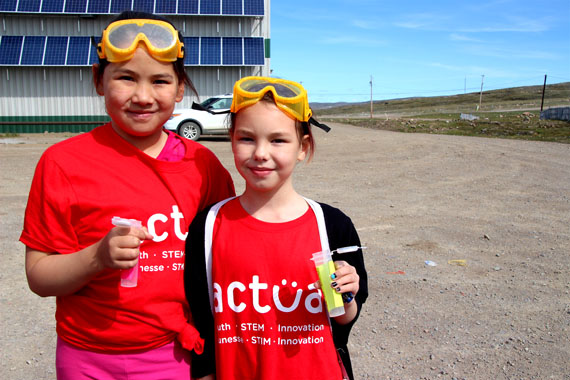 Cynthia Kilabuk, right and Madeleine Merkosak, left, both aged nine, get ready to launch their rockets at a July 21 science camp in Iqaluit. (PHOTO BY BETH BROWN) 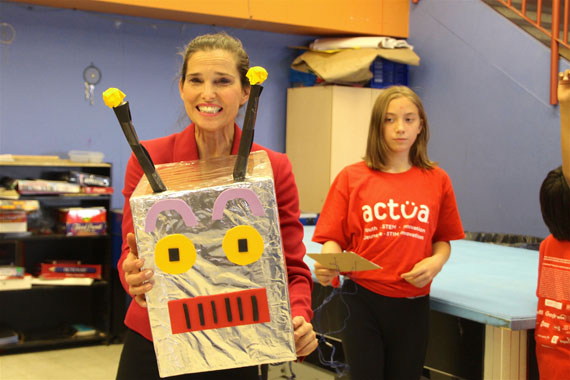 Sophia Mulak, 11, helps Science Minister Kirsty Duncan get through a coding exercise with this robot during Duncan’s visit to Iqaluit July 21. (PHOTO BY BETH BROWN)

As the summer research season gets underway in the Arctic, many scientists are travelling north—but only one of those scientists is also a federal cabinet minister.

“Here in the North, science is part of the culture,” Duncan told Nunatsiaq News July 21. “If you have lived on the land for thousands of years you have to be able to read the skies, the land and the water.”

She started her tour in Resolute, checking out operations at Polar Continental Shelf Program, which is run by Natural Resources Canada.

This included a project by the Geological Survey of Canada to do geological mapping on Somerset Island and the Boothia Peninsula.

“We want to highlight the North. We are so fortunate to have the Arctic. We have to care for it and we have to work with northern communities to do that,” Duncan said.

While in Iqaluit, she met with elders to talk about the importance of traditional knowledge within scientific endeavours. Duncan also met with women who contribute to the scientific community in the territory.

“If we are going to be talking about the north, indigenous peoples, northern peoples must be at the table,” Duncan said.

She said she shared this with delegates at an Arctic Council meeting of science ministers held at the White House in Washington, D.C. last year.

“This is something that is fundamental to me,” she said.

Duncan said she appreciated the need to consult northern communities on research during a medical research project in Norway.

In her role as science minister, climate change research is her focus for the North, Duncan said.

“We’re a government that believes in climate change, it’s the most pressing environmental issue that we have,” said Duncan, who contributed to research for a UN climate change panel that was awarded a Nobel peace prize.

The prime minister’s mandate letter to Duncan requests that she: “Work in collaboration with the minister of Fisheries, Oceans and the Canadian Coast Guard and the minister of Environment and Climate Change to examine the implications of climate change on Arctic marine ecosystems.”

She said the soon-to-open Canadian High Arctic Research Station is one northern specific example of federal efforts to support climate research, along with support for the Paris climate agreement and $250 million in federal funding for a pan-Canadian framework on climate change.

CHARS is now “largely operational,” but its official grand opening has been put off until some time in October 2017, the Polar Knowledge Canada website says.

Duncan also took time during her last few hours in the territory to brush elbows with some up-and-coming northern scientists.

The minister visited an Actua science day camp to hear about campers coding projects, to help test a robot and shoot off a few rockets.

“All kids are curious, they want to explore. It’s our job to foster this,” said Duncan, who heard from campers that they want to be programmers, scientists, explorers and police officers when they grow up.

“She is an incredible role model for them because she is such an accomplished scientist,” said Actua CEO Jennifer Flanagan.

“To have a minister who really believes in the importance of engaging youth is incredible. That is so important to make sure we have northern youth who are interested in science and considering it as a potential career, because there is so much opportunity for economic development and science in the North.”

One camper asked Duncan if she could say, on a scale of one to 10, how much she likes science.

Duncan spread her arms out wide and answered: “200.”

Judging by the excitement the minister expressed over her trip to Nunavut, her answer would have been the same if she were asked about the North.

“The Arctic draws you in and it will bring you back,” Duncan said.