“If it happened in the past, can it happen again?” 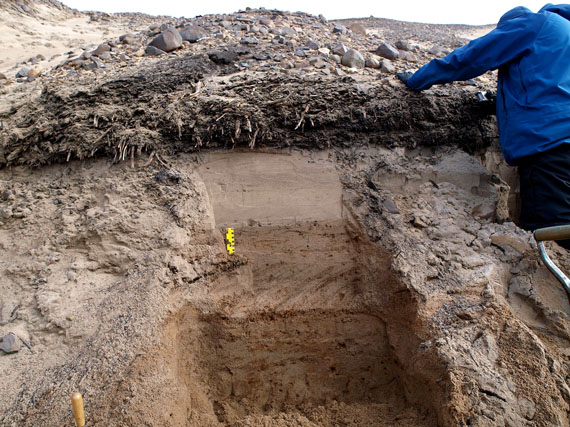 By looking at the layers of sediment within a cleaned section of the Beaufort Formation — as they did here, on Nunavut’s Meighan Island in 2010 — researchers can determine the size, energy, direction, and source of an ancient stream. (PHOTO COURTESY OF JOHN GOSSE) 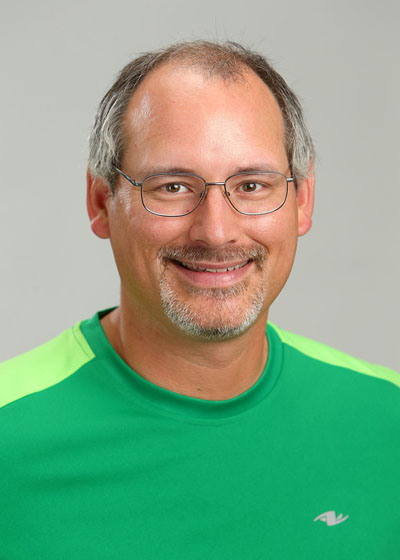 John Gosse, field leader and logistics coordinator for the Banks Island research team and associate professor of Geology at Dalhousie University in Halifax, enjoys digging in the northern ground in search of clues to the Arctic’s warmer past, to predict what its warmer future might look like. (PHOTO COURTESY OF JOHN GOSSE)

They’ve found evidence of giant beavers, camels and tree trunks in Canada’s High Arctic so researchers, heading to an area thought to be from the same geological formation and time period, are wondering what might be in store for the coming summer field season.

A team of researchers, under the leadership of Canadian Museum of Nature paleobiologist Natalia Rybczynski, is heading to Banks Island this summer, just outside Nunavut’s western boundary, to look for more evidence of the Arctic’s warmer, boreal-type forest environment of three to five million years ago.

“The reason I do what I do is because I get to advance knowledge,” says John Gosse, an associate professor of geology at Dalhousie University in Halifax and a member of the team heading north in mid-July.

“I could work for an oil company or a mining company and have a different life, but as a geologist, these things are a means to advance knowledge, to test hypotheses.”

Gosse, who will be travelling with two other researchers and a master’s student, said Rybczynski won’t be joining them on this trip.

He added that the team applied for funding so an aspiring Inuk scientist could come along but that funding didn’t come through.

Gosse and his colleagues will be digging into vertical layers of exposed sand and gravel on northern Banks Island deposited by streams which ran westward from the central Arctic.

During that time, scientists believe the watery channels between the Arctic’s islands were filled in allowing land animals a wide expanse of land to roam on from the Yukon to Axel Heiberg Island.

Scientists predict sea levels will rise as the earth’s climate warms and melts glaciers. For this reason, people living on sea shores and islands worry that their homes will eventually be under water.

But in the Arctic, rising temperatures will also melt permafrost, which contains tonnes of sand, silt, gravel and rocks.

All that material has to go somewhere and scientists are hoping to examine the current permafrost to see how much silt and sand is contained there, where it might have come from, where it might be deposited in future by flowing waters and how that might impact nearby communities and shorelines.

“If it happened in the past, can it happen again in the future?” Gosse asked, of the Arctic channels filling up.

There are too many environmental variables to suggest an exact repeat of what existed a few million years ago, he said, but, “we are definitely going to see a very different Arctic in the next century.”

The Banks Island site is part of what’s called the Beaufort Formation, a layer of sand, gravel and peat that once extended across many of the western Arctic Islands from Axel Heiberg to Yukon. It extends offshore as well, into the Beaufort Sea and Canada Basin, where it is about three kilometres thick.

Scientists have made notable discoveries in the many layers of the Beaufort Formation including seeds, coniferous needles and cones, insects, animal bones and pieces of trees. They’ll be collecting fossils materials again this year.

Through complex and varied dating methods and examination of fossils, scientists hope to gain a better insight into what the climate was like during the Pliocene era, three to five million years ago, and thus help predict what it might be like here, and what kinds of plants and animals might flourish, as temperatures rise.

The team hopes to continue their study of the Beaufort Formation in the years to come on Prince Patrick Island, NT, Borden Island—a portion of which lies in Nunavut—and Nunavut’s Meighan Island, just west of Axel Heiberg.