Five-year, $5-million study looking at natural and manmade aerosols in the Arctic 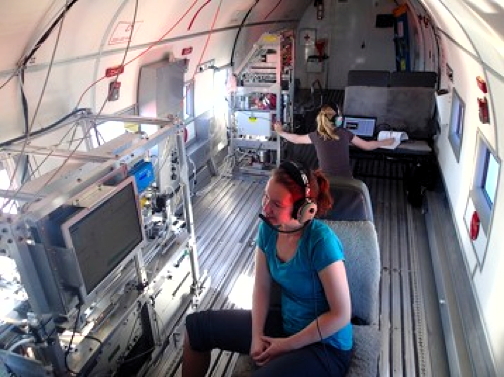 NETCARE crew onboard the German POLAR 6 DC-3 aircraft test out their mass spectrometers in advance of heading to Resolute Bay where they are currently collecting and analyzing air samples in the High Arctic. (PHOTO COURTESY JON ABBATT)

In order to see your breath in winter, there have to be tiny particles floating in the air so the moisture in your breath will have something to cling to and form molecules visible to the human eye.

Those tiny airborne particles, known as aerosols, come from naturally existing things such as plant pollen, dust and sea spray, and also from human made pollution such as black carbon.

A team of researchers now in Resolute Bay plan to examine what sort of aerosols are floating around the Arctic atmosphere in summer and how those particles might impact our northern climate.

“It’s a very complicated process,” said Jon Abbatt, a chemistry professor at the University of Toronto who is leading this project who took care to explain it in plain language. “We’re in the nuts and bolts of this, trying to figure out the details.”

Abbatt, from the University of Toronto, is the lead researcher for NETCARE — the Network on Climate and Aerosols, a project of the Canadian Climate and Atmospheric Research program of the Natural Sciences and Engineering Research Council of Canada (NSERC).

The project is a collaboration between a number of Canadian universities, Environment Canada, the Alfred Wegnar Institute and other international partners.

While the content of Arctic aerosols might be interesting in itself — gauging how much pollution is migrating to Nunavut from Europe and Asia, for instance — Abbatt and his colleagues have a more specific goal.

Tiny particles in the air help to create clouds and clouds impact temperature, precipitation, wind and other aspects of climate.

Also, when pollutants such as black carbon eventually settle on the snow, they darken it. Dark colours absorb more heat from the sun, leading to quicker melting.

That’s not all: more clouds might also mean increased precipitation and that means cleaner air because rain and snow stick to particles in the air and pull them to the ground.

When scientists want to predict how the climate might change in future, they have to plug all these interrelated data and factors into a formula that helps them to create climate models.

But the formula is only as accurate as the data that’s used. In fact, climate change deniers are quick to pick apart climate models when they discover gaps or weaknesses in the data.

“If you really want to make a prediction in the future, of what happens when sea ice melts, you need to tell the information to a model in a correct manner,” Abbatt said. “What is the mechanism by which these particles are forming up here?”

The project might seem unusual to people who study these sorts of things since Arctic air is cleanest, and most free of pollutants, in summer.

That’s because the cold jet stream recedes northward in summer, doesn’t circulate as much in Asia and Europe and therefore doesn’t contain as many overseas pollutants to disperse into the Arctic atmosphere.

Abbatt said the air is so clean in Resolute right now that even though it’s below zero, he often can’t see his breath outside.

But the timing of this project is intentional.

“In summer, it’s a much more biologically controlled system and one of the thoughts is that you make particles in the air naturally through emissions from the ocean and so it’s those particles that really control the climate up here in summer,” Abbatt said.

“Sea ice is melting and we’re going to have a lot more open ocean,” he said. “We may be ultimately changing the nature of the atmosphere up here because we’re moving from having a lot of sea ice all the way through summer to having much more open ocean, and perhaps emitting more particles into the atmosphere.”

Mass spectrometers have been installed on a German DC-3 aircraft owned by their German partners at the Alfred Wegnar Institute, and also on the Canadian Coast Guard research icebreaker Amundsen, which is currently on its way north.

Abbatt and his crew will use those modern machines to collect and study air samples at the molecular level.

They expect to make 20 flights during 23 days in Resolute Bay.

On board the Amundsen, scientists hope to analyze low level air particles and also ship emissions to gauge the potential aerosol impact from commercial and cruise ships in the Arctic which are expected to increase in number over the next few decades.

Abbatt and his team plan to visit different parts of the Arctic at different times of the year until 2018 in order to get a broad spectrum of Arctic air in all seasons.

In March 2015, they plan to fly from Germany across the top of the Arctic to Inuvik and then down to Ontario, collecting air samples along the way.