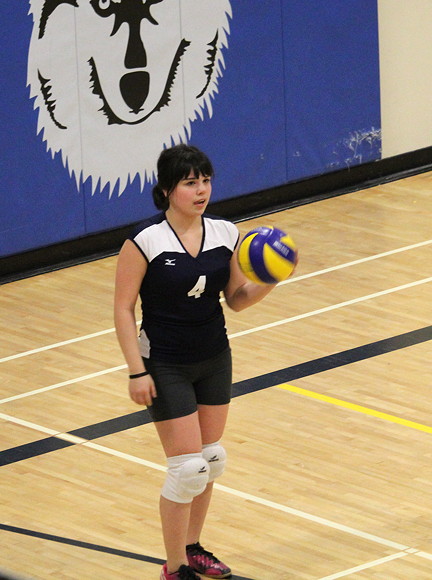 When Emily Ann Niego Dunphy learned she aged-out for Team Nunavut’s soccer — or futsal — team, the 16-year-old spent months lamenting the fact that she would not return to the Arctic Winter Games for 2016.

To make matters worse, a choice she made last summer weighed heavy on her mind: Dunphy had turned down an offer to represent Nunavut in an entirely different sport — volleyball.

At the time, staying with soccer made sense, she told Nunatsiaq News.

She had been playing it longer, she knew the system, she knew her teammates and already had one Arctic Winter Games 2014 appearance in Fairbanks, Alaska under her belt.

And volleyball had been nothing more than an entertaining pastime.

“[When] I was told I was not going, I was upset that I messed up my chances for myself, saying I would pick soccer even though I wasn’t guaranteed,” Dunphy said.

But sometimes opportunities appear when you least expect them.

The volleyball team was on its way to the Caribbean island of St. Maarten for training, and passport issues forced some team members to drop out.

Stevenson’s offer was straightforward. He couldn’t promise Dunphy a spot on the team, but she could follow the group as a backup while they trained in the Caribbean.

“She was very excited,” Stevenson said.

“She hadn’t really expected to be able to participate this year. It was nice to be the one to let her know she would be travelling to Saint Maarten.”

The offer was all Dunphy needed to dive head-first into intensive preparation, acting on a glimmer of hope that, at some point, she might be able to join the volleyball team full-time.

“Once I found out, my hope went up, and I stated to practice a lot more just in case I do end up getting to tryout,” she said.

Dunphy continued to practice volleyball twice a week at school, and added two additional days of training with an all-ages volleyball league in Iqaluit.

“In open volleyball, there really are a lot of competitive players. It’s tough.”

By the time she stepped off the plane in St. Maarten with the rest of the team, Dunphy was ready to prove herself.

Training in the hot sand helped Dunphy fine-tune her reflexes, as well as hone her general awareness of the game.

“You have to think about where you want to go and how fast you have to go to get there,” she said about the shifting sand.

“You really have to watch the ball because you don’t have as much time to get there as on a flat surface.”

Her dedication paid off. Stevenson told Dunphy in St. Maarten that she had made the team.

Since her return to Nunavut in January, Dunphy has continued to develop her skills in multiple positions, first as a forward, or “setter,” and then on defense as a “libero,” blocking spikes.

And the three days a week when she doesn’t practice volleyball are spent talking strategy with her mother, who also played the sport competitively as a youth.

Even her eight-year-old sister is doing her part.

“My little sister, she always tries to bring me up if I’m upset about a practice or if I think I need to work better. She says I’m a really good player and she wants to play as well,” she said.

“We were down two sets and the last three we won,” Dunphy said, on the comeback victory.

With soccer a distant memory, Dunphy said she counts the hours on Sunday before her “volleyball week” begins at 6 p.m.

Now all sights are set on Greenland, and the fortunate turn of events that will bring her back to the Arctic Winter Games.

“I’m very excited. I’ve never been to Greenland before. I heard its very beautiful and I can’t wait to spend it with my team.”