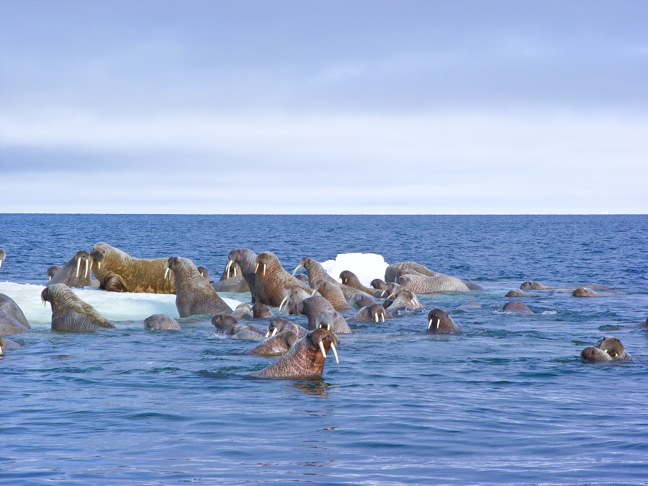 Walruses in Lancaster Sound: Shell announced today it will give up its oil leases here so that the federal government can create a National Marine Conservation Area that includes the area where those leases had been located. (PHOTO BY MARIO CYR) 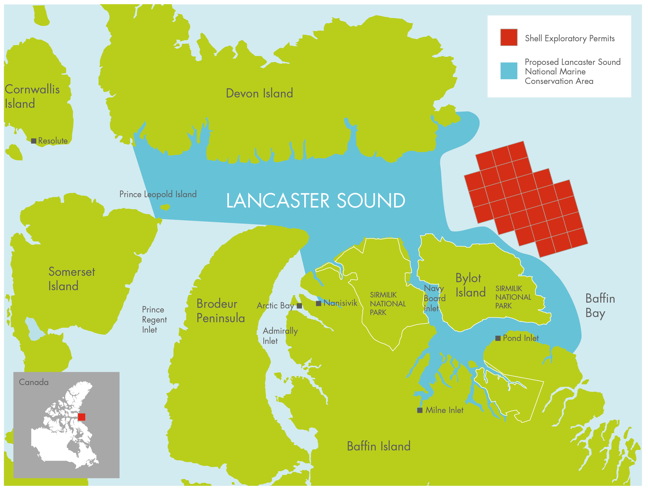 A map of the last proposed marine conservation area boundary. Local groups, and conservationists, had hoped to extend the boundary to where Shell had held oil exploration leases, show with on this map with red squares.

Shell Canada has voluntarily given up its rights to a series of oil exploration permits on blocks of marine territory near Lancaster Sound in North Baffin, clearing the way for the federal government to establish a national marine conservation area in the region with expanded boundaries.

Shell gave the permits to the Nature Conservancy of Canada, who then turned them over to the Government of Canada, Shell Canada and the NCC said June 8 in a joint press release sent to Nunatsiaq News.

“Shell has presented the Nature Conservancy of Canada with more than 860,000 hectares of offshore exploratory permits in the waters of Baffin Bay, near Lancaster Sound. This represents an area larger than Banff National Park,” the release said.

Shell’s donation comes two months after Greenpeace Canada circulated documents to the media alleging that those oil permits, owned by Shell since 1971, may have expired decades ago.

Those exploration permits had been hindering efforts by the Qikiqtani Inuit Association and Parks Canada to create a National Marine Conservation Area across the entirety of Lancaster Sound, a region of critical ecological importance for marine mammals and Inuit.

“[Inuit] need to have that, not only up there but the whole territory depends on animals that migrate through that area,” the QIA board member-at-large, Olayuk Akesuk, in charge of the Lancaster Sound NMCA file, told Nunatsiaq News March 31.

In 2010, the federal government, under former Prime Minister Stephen Harper, proposed a boundary for the NMCA that excluded the area, located east of Lancaster Sound near Bylot Island where Shell Canada held its oil and gas exploration permits.

At a stakeholder meeting in 2014, Shell told the QIA and Parks Canada they would be open to relinquishing the permits only if they were permitted to perform seismic testing on the sites.

Because it’s located within the Nunavut Land Claims Agreement settlement area, the QIA had used a temporary injunction in 2010 that effectively killed a seismic testing project proposed by Natural Resources Canada and a German scientific research institute.

So in effect, the planned marine conservation area was bogged down in a stalemate.

The existence of the oil permits appeared to be heading to litigation: environmental rights group World Wildlife Fund of Canada launched a lawsuit against Shell Canada over the permits in April.

But Indigenous and Northern Affairs Canada defended the validity of the permits to Nunatsiaq News April 11.

“Contributing our offshore rights to the Nature Conservancy of Canada builds on 30-years of joint conservation efforts between our organizations. Through collaborations across sectors, we can achieve greater conservation outcomes together,” Crothers said in the joint release.

“The inclusion of these lease areas helps complete what will be one of Canada’s boldest protected areas and will allow for boundaries that are consistent with community aspirations for Lancaster Sound,” Debicki said.

The World Wildlife Fund also praised the move in a June 8 release and statement from Paul Crowley, WWF’s vice president of Arctic conservation.

“Today’s announcement for Lancaster Sound is a credit to the local people and organizations who have been tirelessly defending the ecological integrity of the region for more than 40 years. It was these people and groups who identified the incredible biodiversity in Lancaster Sound and who spoke out against development that would compromise it,” Crowley said.

“Now that there is nothing to stop the protection of this incredible region, we can move quickly to create the Lancaster Sound National Marine Conservation Area.”

Shell Canada and the Nature Conservancy of Canada appeared at a World Oceans Day event on the morning of June 8 at the Westin hotel in Ottawa.