Cape Dorset artist’s work on display in Iqaluit until Sept. 2 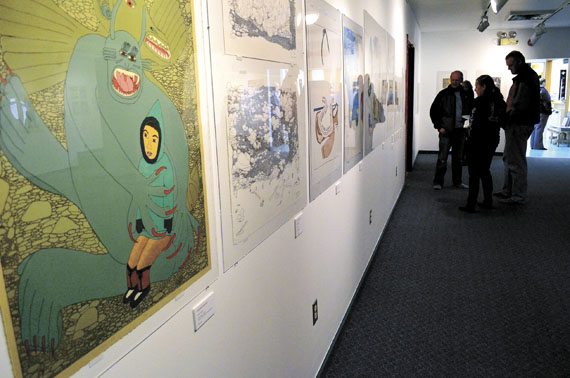 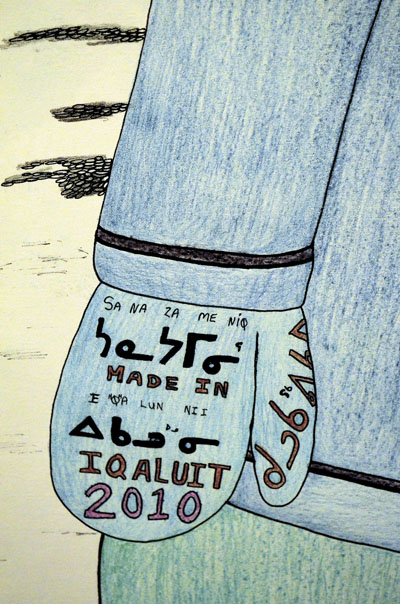 A section of a big piece done in coloured pencil called “Tornado Teacher,” which Ashoona drew in 2010. (PHOTO BY JIM BELL) 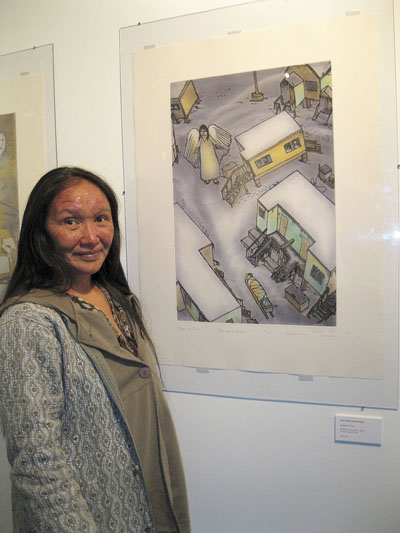 Shuvinai Ashoona welcomed visitors June 29 to the opening of Takujaksait, an exhibit of her work on display at the Nunatta Sunnakkutaangit Museum in Iqaluit for the entire summer. The print Angel in Town, shown, is one of several works Ashoona has produced in Cape Dorset. (PHOTO by PETER VARGA)

Cape Dorset artists are known for producing memorable prints representing stories from the Arctic, and Shuvinai Ashoona is one of the most recent to follow that tradition.

You can see some of her most recent work, including some unique commissions, at the Nunatta Sunakkutaangit Museum in Iqaluit until the end of summer.

Titled Takujaksait, or “something to see,” the exhibit displays some of Ashoona’s best work from the last five years.

She continues the tradition of many Cape Dorset sketch artists before her, benefitting from their community’s history as a centre for print-making.

Unlike past artists, her work illustrates the Nunavut of the 21st century, complete with northern housing, snowmobiles, trucks and modern clothing mixed with skinned animals, hunting tools and traditional sleds.

Globes and overhead views of communities populate many of her sketches. There is recognition of a bigger world outside the Arctic as past artists out of Cape Dorset saw it.

Ashoona, 51, is the daughter of artists Kiugak Ashoona and Sorosilutu, also known for their contributions to graphic arts in Cape Dorset.

At the exhibit’s opening June 29, she modestly deflected questions about her own work, stating simply that she likes other drawings she sees on display rather than her own.

She would only agree that she prefers to draw people acting freely and spontaneously, in much the same way she was encouraged to draw in her early years as an artist.

She works daily at Kinngait Studios in Cape Dorset, where she produces sketches made into etchings, lithographs and stonecut prints.

“They encourage us to draw whatever we want to do,” said Ashoona, whose sketches are made from the most basic materials, coloured pencil and fine-liners.

In addition to 36 drawings, the Takujaksait exhibit features prints that have greater depth of texture to them, such as the works Angel in Town and Pipe Dream, printed by Studio PM in Montreal.

The exhibit also features some less typical projects. Among them are a large tapestry called Standing Rocks, which is a woven reproduction of an Ashoona work.

Another section of the exhibit describes details about a large banner called Earth and Sky, done in collaboration with an artist from Ontario, which is now on display at the National Gallery of Canada in Ottawa.

Equally original is an electric guitar covered with small drawings and Inuktitut syllabic text by Ashoona.

Done at the invitation of a Toronto art gallery manager, the guitar is one of a small set she decorated for musicians.

Takujaksait is on display at the museum until Sept. 2.

Individual pieces can be bought on arrangement with gallery director Brian Lunger.

Prices for each work are listed. Buyers can claim their purchases and have them delivered once the exhibit closes.