“Anyone can make them if they know the recipe, the rest is just simple” 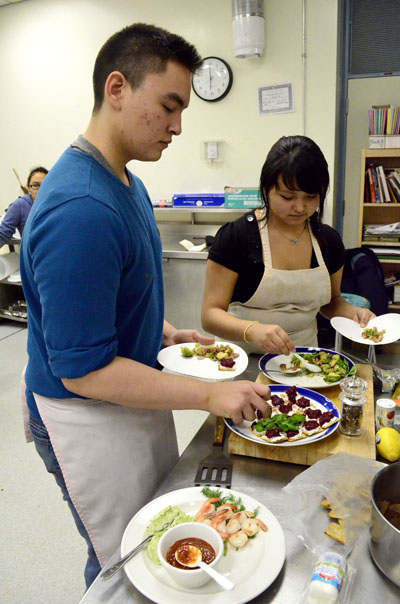 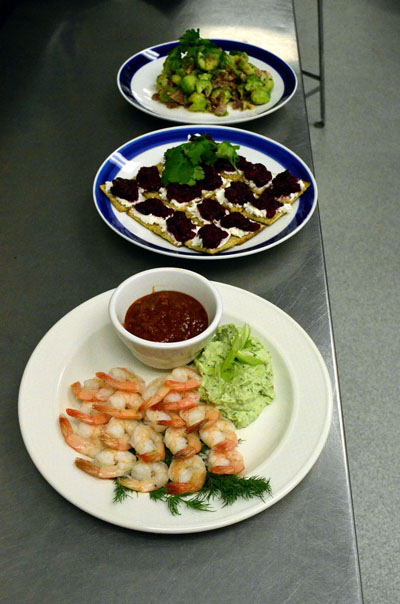 But most of the Iqaluit teens who make up the Skills Nunavut Iqaluit cooking club joined because they wanted to learn how to make good food.

This is the third year that Aaron Watson has lead the Skills Nunavut program, transforming the kitchen at Inuksuk high school into a laboratory of fine ingredients and good scents.

Watson, who worked professionally as a chef before moving to Nunavut in 2004, has since led his students to two gold medals at territorial skills competition; the group has also competed nationally.

But it’s the smaller victories he cherishes, like getting students try food they think they don’t like.

“Only to find out with a little extra preparation and more complex flavour profiles they actually do like what we’ve made,” Watson said.

That was the case with at least one Skills club member, 16-year-old Shawn Lee Baines, who’s discovered that he likes brussels sprouts.

Often the combinations of food Watson brings to class are new to his students. That makes preparation more fun, said Nicole Amagoalik, 16.

“I now know how to make food I’ve never made before,” she said.

The club got together Dec. 11 to prepare a few holiday dishes, which they agreed to share with Nunatsiaq News.

“A lot of the things we make are kind of easy,” said Skills club member Tooma Dianna Laisa, 13. “Anyone can make them if they know the recipe, the rest is just simple.”

1. Wash and pick over cranberries. In a saucepan bring to a boil water and sugar, stirring to dissolve sugar. Add cranberries, return to a boil. Reduce heat, simmer for 10 minutes or until cranberries burst.

2. Use a masher or puree the cranberry mixture to a chunky texture as you would for cranberry sauce.

4. Mix the jalapeno, ginger and cilantro in to the cranberry mixture to desired taste.

5. Chill and serve on top of your favourite cracker or a toasted breads with a generous spread of goat’s cheese and the cranberry mixture on top.

For the shrimp it is preferable to use raw medium sized tiger shrimps available in the frozen section at most grocery stores. If these are not available frozen cooked shrimps usually are. Cooked shrimps will be ready to thaw and serve. Using raw shrimp, defrost in fridge overnight and peel and devein leaving the tail piece of the shrimp on.You can often buy raw shrimps peeled and deveined already.

Once the shrimps are prepared cook them in a pot of boiling water. Depending on the size they will take only three to five minutes or less to cook. You can see the colour change immediately and once they are fully pink and start floating they are done. If the flesh does not appear translucent on the back of the shrimp where the knife split it when deveining it is done.

Immediately drain and put in to an ice bath to stop them from cooking. Remove them from ice bath and chill them until serving.

Combine the chili sauce and ketchup. Add in horseradish, lemon juice, Worcestershire sauce, and hot sauce to your desired taste. Remember you can always add more but you can’t take away. I put measurements for the last four ingredients but truly you can manipulate those to your own liking.

1. Scoop pulp from avocado into a medium bowl, and mash until very smooth.

2. Using a grater, zest lemon about two teaspoons or a bit more if you want a more lemony flavour. Juice lemon.

3. Mince green onion or chop as finely as you can.

4. Finely chop about a tablespoon’s worth of dill and parsley. Again you can chop and add more if you want more of a certain flavour.

6. Add salt and pepper to taste.

7. Chill. When putting in fridge make sure container is airtight to avoid discolouration. I put plastic wrap right on top of the mixture as tight as I can even inside a container with a lid. Stir well before serving.

Arrange all these two sauces with the shrimps on a platter and serve.

1. Heat frying pan on stove. When hot, toss chopped walnuts over pan for a minute being careful not to burn. Set aside when done.

2. Peel outer leaves off of brussel sprouts, trim and half them through the root end with your knife.

3. Bring pot of water to boil. Put brussel sprouts in and partially cook for two to three minutes (until they turn really bright green and yellow).

4. Immediately drain brussels sprouts and put into ice bath. Once cool drain and set aside.

6. Put frying pan on stove burner on high to heat. Once hot add bacon lardons. After a minute turn heat to medium and continue to cook bacon.

7. When bacon is cooked but not crispy or burned add brussel sprouts and sauté in pan. Finish cooking and making sure they are cooked through. Best way to know is always to taste one or cut through one.

8. Add the toasted walnuts and continue to cook for another two minutes.

9. Add two teaspoons (or to taste) of lemon juice and salt and pepper to taste. 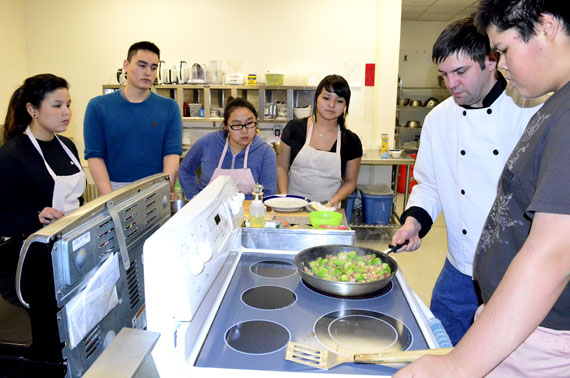