“We figured we had to get bigger, so we could pay rent, or shut down.” 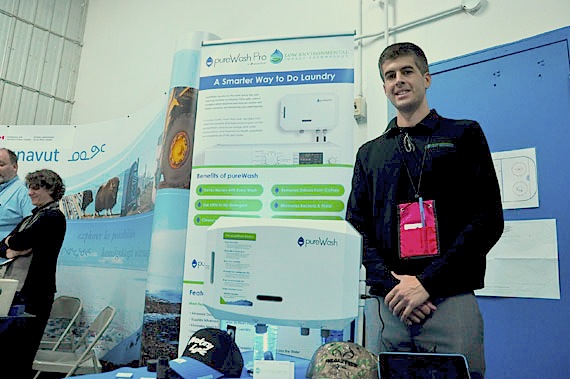 Meet Kevin Shale, who has sole distribution rights in Canada for the pureWash Pro, at the Kivalliq Trade Show. (PHOTO BY THOMAS ROHNER) 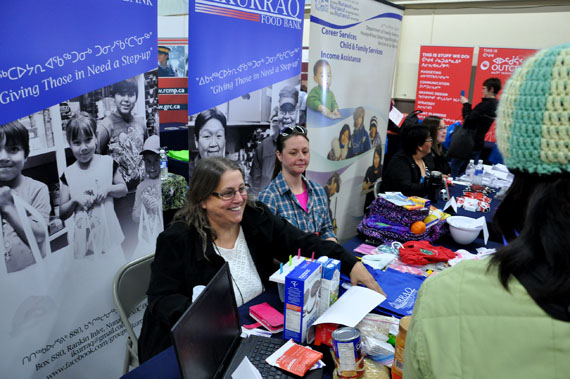 Mary Fredlund of the Ikurraq Food Bank in Rankin Inlet at the Kivalliq Trade Show this week. (PHOTO BY THOMAS ROHNER)

The Government of Nunavut, Agnico Eagle Mines Ltd., Lester Landau accounting firm and the federal government, for example, all had booths set up for the trade show.

But tucked in between these Goliaths were plenty of Davids—small businesses fighting for a chance to bloom.

Kevin Shale is one such David hoping to become a Goliath.

The product involves a unit that can be attached to any front or top-loading residential washing machine and removes the need for most or all laundry detergent.

“This is the Canadian launch of this product,” said Shale, who comes from Manitoba.

The ozone molecules latch onto and then break down mould, bacteria, viruses and organic matter stuck in clothes, he said, adding that the ozone also loosens the fibres in clothing, lifts odours out and acts as a fabric softener.

“Because it eliminates odours, the unit is perfect for hockey gear and hunting gear,” said Shale.

Shale clearly understands the possible application of the pureWash pro for Nunavummiut.

And he said he hopes the unit, which cannot treat oil-based stains, will soon be available across the country through local distributors who can offer support services.

A unit would cost about $500 in Nunavut.

“By Nunavut prices, that means the pureWash pro would pay for itself in about a year, with all the money saved on detergents. Spot treatment for stains would still be needed for oil-based stains, but it can take care of everything else,” he said.

On the other side of the community hall, at a small booth, sandwiched among the giants, you could find the Ikurraq Food Bank.

It’s been a year of change for the little volunteer-run organization, Mary Fredlund, a long-time volunteer, said at the booth.

The Anglican church that housed Ikurraq rent-free opened a new location, with no room for the food bank, Fredlund said.

“So we figured we had to either get bigger, so we could pay rent, or shut down,” she said.

So Ikurraq now wants to get bigger, but the organization can’t do it alone and needs help.

Over the past year, Ikurraq established official society status, which increased its ability to fundraise, accept donations and grants,  Fredlund said.

The food bank is also trying to raise awareness of its value to the community by raising its profile—at events like the trade show.

Ikurraq continues to use sales from its second-hand store to buy food, which it then distributes through the food bank.

“And this year we got a whole sea can of stuff sent to us from Kids Against Hunger, an American organization that sends food to Third World countries,” and, apparently, Nunavut, Fredlund said.

Despite being well-used by the community, and the continued support from organizations like the Rotary Club, Fredlund said Ikurraq’s biggest goal for the future is simply to make ends meet.

“We need to pay our rent and make sure we don’t fall apart,” she said.

To find out more about Ikurraq or to make a donation, you can visit the food bank’s Facebook page by clicking here.