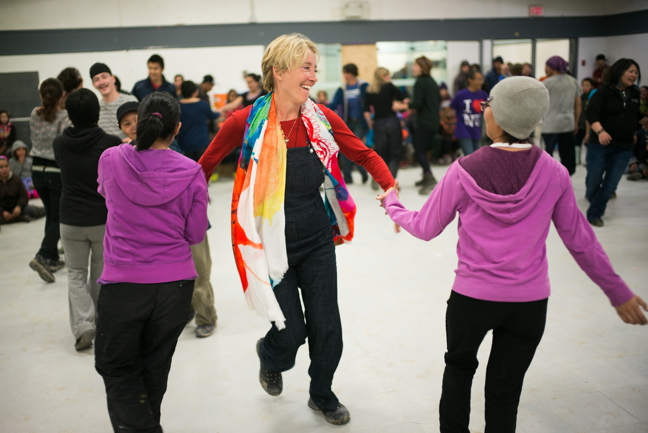 Award-winning actor and climate change activist Emma Thompson kicks up her heels at a feast and dance Aug. 23 to celebrate the successful installation of solar panels in the community. (GREENPEACE PHOTO) 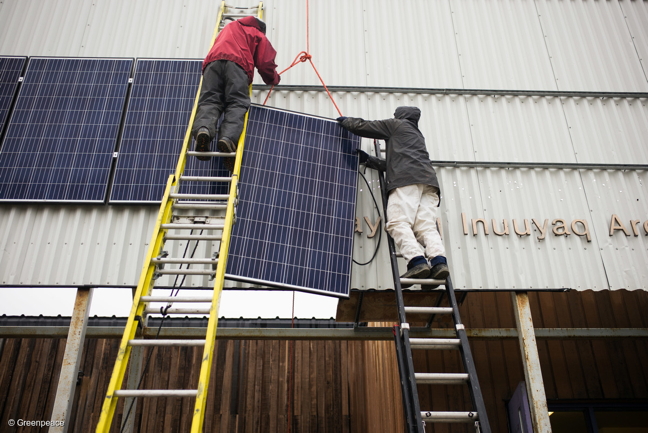 It was cold on the hands sometimes and they didn’t always have the exact tool they were looking for, but the man in charge of installing 27 solar panels on Clyde River’s community hall says with help from local people, the job got done.

Duncan Martin, a solar panel installer from the Vancouver Renewable Energy Co-op, said Aug. 25 that Clyde River residents showed up with ladders and other tools over the past 10 days to help fasten the polycristalline photovoltaic panels to the hall’s south-facing wall.

“People in the community are so willing to find solutions so if access was a little more difficult than we thought, a ladder shows up. We just had volunteers, from Greenpeace and from the town, to smooth out the bumps of doing this in a remote place,” Martin said.

“It’s been a great experience and one that we can learn from and maybe do more installs in the north, either here or in other communities.”

Martin made his way to Clyde River from St. John’s, Nfld., on board the Greenpeace icebreaker Arctic Sunrise earlier this month, arriving in the North Baffin community of 1,000 on Aug. 15.

Since then, Martin along with local residents and Greenpeace volunteers have installed the panels on the community hall, training local people to maintain and troubleshoot the new energy system as well as answering questions on how it works.

“This is a happy day for Clyde River,” said James Qillaq, mayor of Clyde River in an Aug. 25 Greenpeace news release.

“The solar panels on our community hall will allow us to produce energy with less diesel while saving money at the same time that we reinvest into youth programs. Renewable energy that does not harm nature is exactly what we want for our planet. We are proving that solar energy is a real possibility in the Arctic.”

Clyde River resident Nash Palituq corresponded through Facebook with Nunatsiaq News to offer his thoughts in the installation and Greenpeace’s visit.

“The solar panels are great for the community hall building since they were using a lot of electricity when I was on the recreation committee, so it’s great,” he wrote.

He added that he appreciates Greenpeace supporting them through this project, and by adding their sizable voice and membership power to the fight against seismic testing. But he said he wasn’t sure he trusts the environmental organization entirely yet.

According to estimates from the Vancouver Renewable Energy Co-op (VREC,) the solar panels will generate enough energy to save the hamlet about $4,500 per year.

Of course, savings would be higher if there was more sunlight.

Martin explained that the panels go to sleep when it’s dark and then come to life even with the slightest bit of sunlight so they will generate power to the hall well into the fall before the sun disappears.

Clyde River has 24-hour sunlight from early May to late July, but even in February and October, the community gets seven to eight hours of sunlight per day.

The sun disappears for roughly two months, from mid-November to mid-January.

Generally, VREC likes to monitor the performance and be alerted of problems by hooking up new remote installations to the internet.

But in this case, the hall does not have an internet connection so someone will have to visit the hall regularly to read a display panel and gauge the performance that way.

Martin said the system will be ready to go by the time he leaves Aug. 29 but it won’t actually be operating until an electrical inspector visits Clyde River and ensures it’s safe and up to code. He expects that to happen within a month or so.

Martin said he’s confident the system will be in good hands when he leaves.

“Yes, we’ve had really good relations with people who will be keeping an eye on it and production and who are aware of how to do any replacements, should that have to happen,” he said.

“As far as the functionality goes, yes, it’s tried and tested.”

Along with the 27 panels installed on the hall, VREC configured a 28th panel to operate as a mobile unit.

Martin said the high school shop class is expected to build a special qamutiq so that it can be transported out on the land for use to power up devices and run low voltage power tools, lights and other light loads.

The panels and installation cost roughly $35,000.

Greenpeace hosted a feast on Aug. 23 with beef stew, music, dancing and games to celebrate the visit

“We are so honoured to be here,” Martin said. “The community has been so lovely to us. It’s been great.”