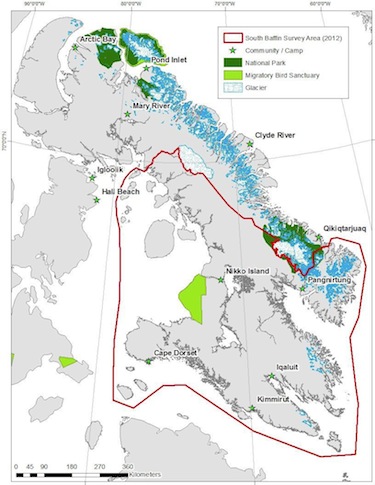 Caribou populations in the South Baffin area, shown here circled in red, may have dropped by as much as 95 per cent over the past 20 years, according to a 2012 aerial survey by Nunavut’s Department of Environment.

Caribou populations in southern Baffin Island have declined by more than 95 per cent over the past 20 years, according to a 2012 survey by Nunavut’s department of Environment.

The results “are consistent” with what the government has heard “from all 10 Baffin Island communities” Environment Minister James Arreak said in the legislative assembly March 16, when he announced the release of the study.

“Harvesters, elders, and community members have told us that caribou are becoming increasingly difficult to find,” Arreak told members of the legislative assembly.

“They have also expressed concerns about the negative impacts of land use and other factors on caribou and their habitat.”

The survey estimated a population of just 1,065 to 2,067 caribou aged one year or older in the entire south Baffin region.

The report describes the survey as “the first comprehensive population estimate.”

The population survey was made from the air, by helicopters charting the southern part of Baffin Island in flight-paths totalling 27,000 kilometres.

Hunters participated in the survey by acting as expert spotters.

The study began prior to 2010, when a big Baffin-wide survey of caribou was already underway.

Researchers took a traditional knowledge study released in 1992 as its basis for comparison.

That study, led by Mike Ferguson, then a territorial government biologist, estimated South Baffin caribou populations at 60,000 to 180,000 animals in 1991.

These estimates “are not based on any systematic survey; they were derived from incidental observations, local knowledge, anecdotal information, and professional opinion,” the summary report of the 2012 study says.

Even so, a comparison of the 2012 survey with this estimate shows a drastic decline.

These results, together with Inuit knowledge collected in 10 communities, “highlight the need for a comprehensive co-management system [between the Department of Environment and wildlife managers] and conservation plan,” the study said.

Arreak told members of the legislative assembly that the department is making arrangements to do just that.

The Department of Environment will meet with the Qikiqtaluk Wildlife Board, which regulates hunting practices among hunter-trapper organizations in the Baffin region, and Nunavut Tunngavik Inc. to organize a workshop with wildlife managers from Baffin communities.

The purpose, he said, will be to propose solutions to the “conservation concern.”

The report says Baffin caribou surveys over the past 60 years do not give “robust estimates” of population.

Until the 2012 study, past surveys covered only “discrete portions” of the animal’s range.

“Although no quantitative estimates are available,” says the report, “for over a decade Inuit from communities on northern Baffin Island, and more recently from across the entire island, have reported declines in caribou numbers on Baffin Island.”