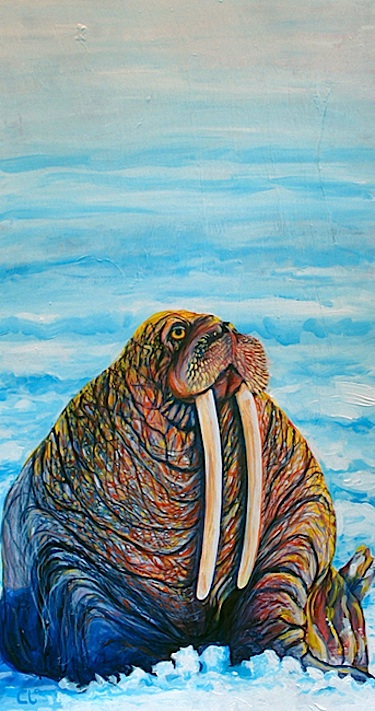 The push is on for shipping speed limits in Arctic waters to avoid hitting marine mammals like walrus and whales. (FILE PHOTO)

Environmentalists and Arctic aboriginal groups are urging speed limits on ships and other rules to protect marine mammals as the Northwest Passage and other polar transportation routes become more heavily travelled in an era of retreating sea ice.

The U.S.-based Wildlife Conservation Society and native organizations, including the Inuit Circumpolar Council, issued a call on Friday for northern countries to acknowledge the rising risks to northern marine creatures resulting from the “rapid increase in shipping in the formerly ice-choked waterways of the Arctic.”

Of particular concern, the groups stated after a three-day workshop on the issue, is the Bering Strait between Russia and Alaska, an ecologically rich but relatively narrow choke point for ships travelling through both the Northern Sea Route north of Russia and the Northwest Passage through Canada’s Arctic islands.

Among the species at risk from increased shipping are bowhead and beluga whale, walrus, several kinds of seals and the polar bear, the groups said.

“The disappearance of summer sea ice from the region’s coastal areas is leading to major changes in this part of the world,” society scientist Martin Robards said in a statement. “The presence of large ocean-going vessels is expected to increase as the region becomes more attractive to both international shipping and extractive industries seeking minerals, oil and gas.”

Robards told Postmedia News on Friday that the emerging problem is common throughout much of the Arctic Ocean but that the Bering Strait gateway to polar waters is a priority area because of the “concentration of marine mammals and indigenous people” in Alaska relying on them as a traditional resource.

He said the “phenomenal number of marine mammals” inhabiting and migrating through the Bering Strait passageway between the Pacific and Arctic oceans “certainly requires something to be done.”

Robards and the other advocates pointed to shipping restrictions along the Atlantic coast of Canada and the U.S. – where concerns about the endangered North Atlantic right whale have prompted the imposition of speed limits and other conservation measures – as a potential framework for protecting bowhead whales in the Arctic.

Such “trans-boundary schemes” in both Atlantic and Pacific waters shared by the U.S. and Canada “may offer models for moving forward” on a mammal-protection regime in the Arctic Ocean, said Robards.

WCS and the native groups suggested the possible need for marine mammal observers aboard all ships moving through sensitive Arctic waters and seasonal restrictions on ship traffic in key breeding and feeding grounds.

In Nunavut, federal and territorial officials and various Inuit organizations are currently negotiating the framework of a new national marine conservation area encompassing much of Lancaster Sound, the eastern entrance to the Northwest Passage and one of the Arctic’s most biologically diverse marine habitats.

Prior to the federal government’s formal announcement of the planned protection zone in 2010, Lancaster Sound had been a flashpoint for controversy over scheduled seismic testing in the area, a project panned by critics as a prelude to oil and gas exploration and a potential threat to a host of marine species, including bowhead whales and narwhals.

Wildlife advocates in Canada and the U.S. have also sounded alarms about the danger to various whale species posed by military sonar exercises – a concern that was also raised at the WCS-organized workshop.

The owner of a German cargo ship agreed to pay 16 separate fines totalling $92,000 US for speeding violations off the Florida coast. The operators of the M/V Vega Sachsen were found to have repeatedly violated provisions of the U.S Endangered Species Act and the Marine Mammal Protection Act between December 2009 and April 2010.

Two other ship owners agreed to pay their fines as well, and six more are still facing charges of breaking the 10-knot speed limit imposed in 2008 in areas identified as right whale migration corridors or calving areas.

The ships had been clocked at up to 18 knots and were slapped with $5,750 tickets for each infraction. NOAA researchers have concluded that ship speed is a clear “predictor of death” when vessels and whales collide.

“The likelihood of a whale fatality due to ship strike increases from around 45 per cent to 75 per cent when vessel speed increases from 10 to 14 knots,” NOAA told Postmedia News in January. “Chance of death at 17 knots was 90 per cent.”

Experts believe there are fewer than 400 North Atlantic right whales living today off the East Coast of North America, where they spend the summer and fall feeding and breeding in the Gulf of Maine, including the Bay of Fundy between Nova Scotia and New Brunswick.

The rest of the year is spent migrating towards or congregating at a well-known birthing site near Florida and other habitats in Atlantic waters in the U.S. southeast.