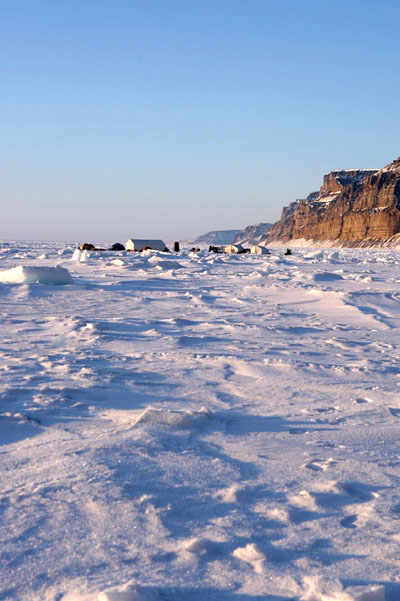 A camp near Arctic Bay, in an undated file photo. Hunters and tourists stranded in Admiralty Inlet on a piece of ice that broke away from the floe edge are now back on solid land. (FILE PHOTO)

About 20 well-heeled southern tourists and their guides returned from a bigger adventure than they likely expected June 25, after they and about 10 Inuit hunters made their way back to solid land after getting stuck on a five-kilometre-long piece of ice that broke away from the floe edge in Admiralty Inlet near Arctic Bay.

“There are no injuries and the travellers are in good spirits,” the tour company Arctic Kingdom said June 25 on their website.

The tourists are part of a packaged adventure called Great Migrations of the Northwest Passage.

The 2013 double-occupancy price for the package is $10,900 plus GST, from Arctic Bay. On top of that, tourists pay an Ottawa-Arctic Bay fair of $4,524 per return flight, plus fees and taxes.

The travellers found themselves stranded after the piece of ice they were camped on broke away some time during the late hours of June 23 or early June 24.

That triggered an emergency response from the Joint Rescue Coordination Center in Trenton, Ont., which sent a Hercules aircraft to drop supplies for the stranded people.

The local hunters made it back to dry land first, after their part of the ice chunk broke away and moved close to shore.

As of the morning of June 25, the tourists and hunters were waiting to be transported by helicopter to Arctic Bay.

“The individuals have access to food, water, shelter and efforts are ongoing for their return to Arctic Bay,” the RCMP said in a news release.