“There are many factors we can point to” 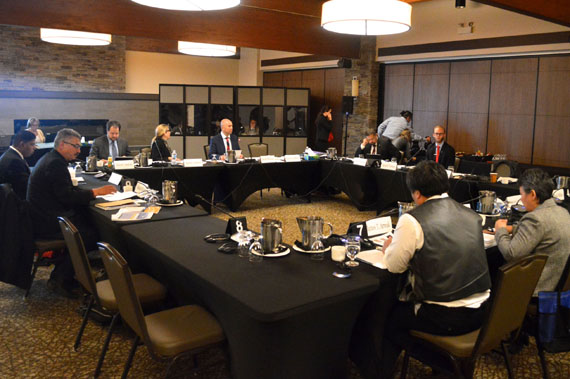 The House of Commons standing committee on Indigenous and northern affairs heard many Inuit and northern witnesses give evidence at a hearing held Sept. 23 in Iqaluit. (STEVE DUCHARME)

Northern Canada needs more money, cultural support and long-term funding stability from the federal government if it hopes to reduce the alarmingly high rate of suicide throughout the territory.

That’s according to the Nunavut cabinet minister responsible for suicide prevention, George Hickes, and a host of other northern witnesses who testified before a House of Commons standing committee hearing Sept. 23 at Iqaluit’s Frobisher Inn.

The standing committee on Indigenous and northern affairs wants to gather information for a report on the factors contributing to Indigenous suicide, expected to be tabled in the House of Commons early in 2017.

“This is the one that has risen to the top with the utmost urgency,” said the Liberal MP from Halifax, Andy Fillmore, who chairs the standing committee.

Hickes, alongside Nunavut’s assistant deputy minister of quality of life, Karen Kabloona, acknowledged “bumps along the road” that hindered the effectiveness of the territory’s previous suicide prevention strategy and action plans rolled-out in 2010-11.

Those were the same plans roundly criticized in findings of a jury that sat through a special coroner’s inquest on suicide in 2015, which prompted Taptuna to declare suicide a crisis in the territory shortly afterwards.

“We need to be engaged in the design and delivery of new programs, services and research so that they meet our needs and we have adequate time to develop capacity for delivery,” he said.

David Yurdiga, the Conservative MP for Fort McMurray-Cold Lake asked Hickes if support programs would benefit from longer-term funding by the federal government.

Hickes responded that his main priority at the roundtable was to convince standing committee members that stable federal funding—with greater flexibility—is what’s needed for Nunavut.

That type of funding is important because of systemic, long-term infrastructure issues plaguing the territory, specifically overcrowded households and the lack of affordable housing, which is a main contributor to mental well-being, Hickes said.

Hickes, who was minister responsible for the Nunavut Housing Corp. until last June, told the committee that the Government of Nunavut is making no headway on the estimated 3,000 units needed to solve its housing crisis.

“We’re not even maintaining [gains on] what we’re building,” Hickes said, estimating that Nunavut needs an additional 85 to 100 units every year due to population growth.

He also cited the successes of the Ilisaqsivik Society in Clyde River for its grassroots treatment programs using Inuit Qaujimajatuqangit.

NTI is also strongly opposed to proposed amendments to the Education Act that would shift more authority away from local district education authorities.

“[Inuit] are being told that their language and culture is insignificant and of less value than that of Western Canadian society. These beliefs are reinforced through the education system, the media, popular culture and everywhere,” Arreak said.

“There are more non-Inuit teachers than there are non-Inuit students… These numbers reflect a continuation, in present day terms, of cultural assimilation experienced by Inuit in the residential school era.”

The president of the Nunatsiavut government in Labrador, Johannes Lampe, repeated Arreak’s warnings about the erosion of Inuit identity, which contribute to mental illness.

“Relocation has had a profound impact on not only those that were displaced, but for their families for generations to come,” Lampe told the standing committee.

“We are in danger of losing our language and culture.”

Lampe, whose son died in a completed suicide, said Labrador suffers from suicide rates 20 times higher than Newfoundland, according to recent studies.

“My story is not unique. It is a common story across Nunatsiavut,” he said.

Nunavut’s independent MP, Hunter Tootoo, welcomed members of the standing committee at the beginning of the day’s schedule, telling them he “looked forward to presenting [to them] in Ottawa.”

The standing committee is scheduled to meet on Parliament Hill in Ottawa Sept. 28 for another public hearing on the roots of Indigenous suicide.

The Liberal MP for the Northwest Territories, Michael McLeod, told Nunatsiaq News that spending is needed in all areas highlighted by the standing committee’s witnesses.

“Housing has been identified as a big issue with every presentation. Some people have suggested that half our social problems would go away if we had adequate housing in our communities,” he said, while also citing education as an important issue.

“There are many factors we can point to and there’s really no magic solution to it,” he said, adding that most of the factors can be traced back to the residential school system.

“It took several generations to deteriorate the situation with the people across the North to what it is now, where it’s creating a sense of despair amongst our people and more particularly, our youth.”