A Heartbreaking Letter from the Windward 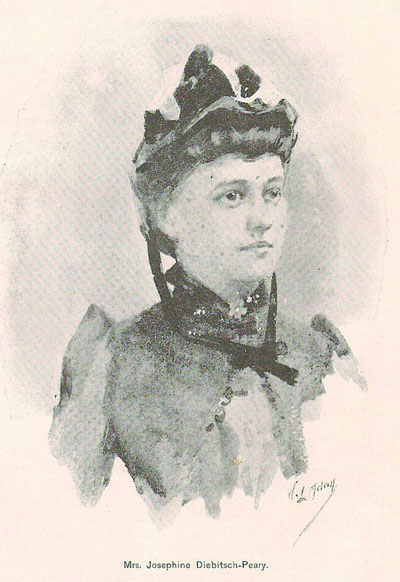 As recounted last week, Robert Peary’s long-suffering wife, Josephine, arrived in the High Arctic waters between Greenland and Canada aboard the Windward in 1900, hoping to visit her husband, whom she had not seen for two years. Josephine was accompanied by her young daughter, Marie, who had been born in northern Greenland seven years earlier.

But ice prevented the ship from reaching Peary, who was far to the north at Fort Conger, and the vessel had to winter at Payer Harbour on the Ellesmere Island coast. Peary did not know until the following spring that his wife and daughter had arrived and would not see them until May 6, 1901.

But before Peary’s arrival, an unexpected visitor arrived at the ship.

A young Inuk woman, Aleqasina (also known as Aleqasinnguaq), had stories to tell and some of them concerned the baby boy named Anaukkaq, also known as Samik, that she carried on her back. The boy’s father, she explained naively, but proudly, to an incredulous Josephine, was Robert Peary.

Needless to say, Josephine — who had given birth to Peary’s second daughter during her husband’s absence and then lost the baby to illness seven months later — was shocked. Her daughter had died while her husband’s bastard son had lived!

Josephine could not vent her anger and disappointment on her absent husband, so she poured her soul out in a 26-page letter that she wrote aboard the ship. She started it on Aug. 28, and continued it over a number of days.

It begins: “Today I feel as though I should not see you this year… You will have been surprised, perhaps annoyed, when you hear that I came up on a ship… but believe me had I known how things were with you here I should not have come.”

Josephine had been lonely and suffering from depression. Grieving for her lost child, she wanted to see her husband, and had made the arduous trip north. She continues her anguished letter: “I was so heartsick & lonely & weary of it all, all I had to live on was the memory of what we had been to each other. In my despair I grasped the chance to come to you believing that a few days together would make the future a little brighter for both, for in my ignorance I believed you to be as lonely & hungry as I. I have found out my mistake & suppose I ought to be glad that you are less wretched, but it hurts.”

Eventually she confronts the matter that had broken her heart:

“I have looked out for Allakasingwah and your boy & allowed them in the cabin with Marie. It is a great concession for me to make… It cut me like a knife to hear her tell Marie all about you… To think she had been in your arms, has received your caresses, has heard your love-cries, I could die at the thought… Have you, my husband, ever thought what these years have been to me since I bade you farewell? During these hungry years I have been consoling myself… with the thought that it was just as hard for you, & I must be brave for your sake… On reaching Etah I find you have probably never given me a thought & a creature scarcely human has the power to make you forget everything except her. Oh my love, why do I live?”

Then, abruptly, Josephine stops herself with “But there, I did not mean to give way to my feelings.” She returns to a discussion of news from the south that will interest him, before proclaiming, “You who have given me more pain & more pleasure, more sorrow & more joy than any one else in the world. I can’t give you up. I can’t.”

Josephine wrote that she intended to do everything within her power to advance Peary’s cause once she returned south, but added, “I have the strongest feeling that I shall never see you again. I have felt this way all along but never so much as when I buried my baby & now.”

On Aug. 31, Aleqasina was seriously ill. Josephine spent the day treating her rival while Marie played with her Inuit half-brother. The following day, when Aleqasina’s condition worsened, Josephine wrote, “I am much afraid you will lose your ‘Ally’. This morning she was a pitiful sight.”

Still, Josephine attended to her medically, noting, “I can assure you that had it been anyone else I would not have done it but I felt that I was doing it for you.”

On Sept. 2, Aleqasina was taken to the Inuit camp onshore. Josephine had heard that it was a tribal custom to kill an infant if the mother died and, concerned for the safety of little Anaukkaq, she asked another explorer to ensure his safety. She added, “I hope for your sake the woman will recover.”

And there, on the 26th page, the letter ends abruptly, unsigned.

Josephine was not reunited with her husband until the following spring on his 45th birthday. She and Marie left for America on the Windward on August 24. Robert Peary remained in the north for another year. He continued his errant ways. Aleqasina bore him another child a few years later.