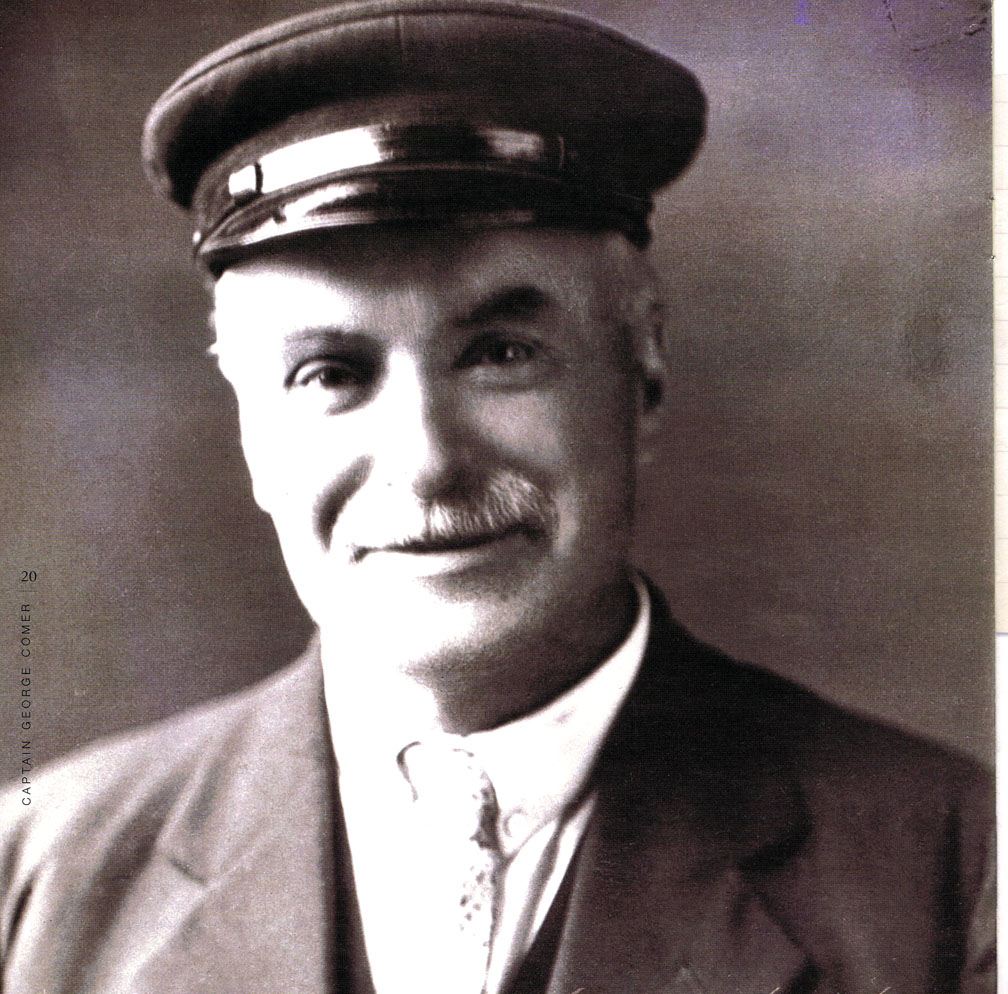 An exhibition devoted to Captain George Comer opened May 3 at the Canadian embassy in Washington, D.C., organized with the help of the Mystic Seaport Museum of Connecticut and the Canadian Museum of History. (HARPER COLLECTION) 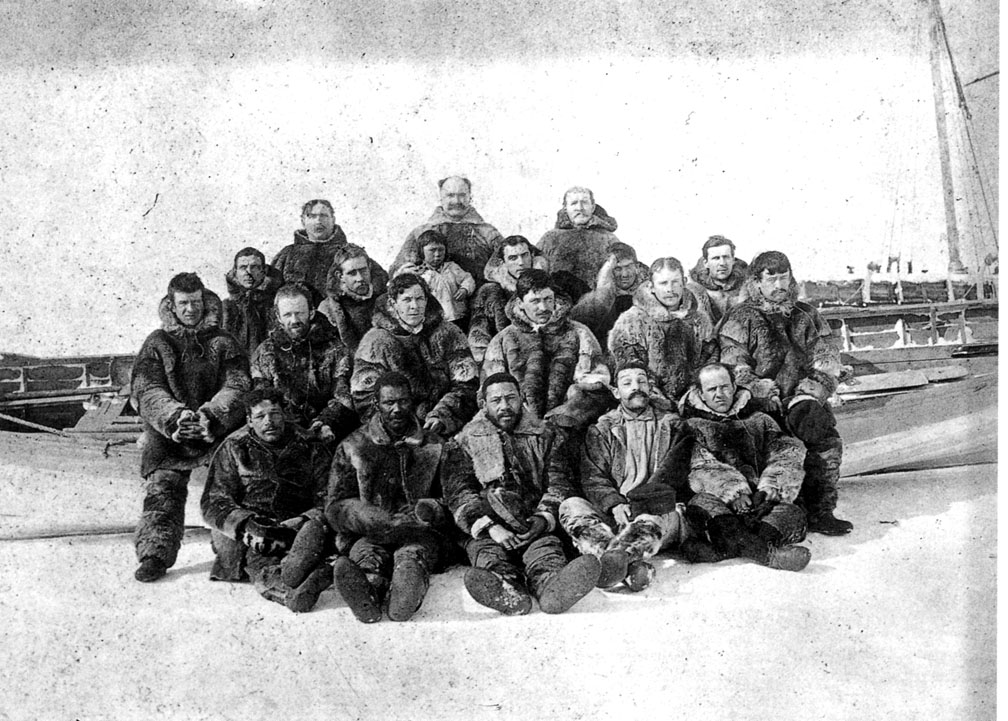 Captain George Comer and the crew of his vessel, the Era, in 1904. Comer sailed to the Cape Fullerton and Chesterfield Inlet areas of the Kivalliq region on many voyages between 1889 and 1919, some of them as master of the Era. (HARPER COLLECTION)

On May 3, the Canadian embassy in Washington, D.C. opened a new exhibit, Captain George Comer and the Inuit of Hudson Bay. It began with a brief symposium attended by Arctic scholars and a number of Canadian Inuit.

George Comer was Canadian-born, but moved as a young man from Quebec to Connecticut with his mother.

Born in 1858, he was only 17 when he made his first whaling voyage, on the Nile, bound for Cumberland Sound. A 14-year hiatus from the Arctic followed, but he was at sea for most of that time, venturing as far away as the Antarctic on sealing trips.

The Antarctic experience readied Comer for the career that was to follow in the eastern Canadian Arctic. When he returned to the North, it was for three seasons as mate aboard the schooner Era, sailing out of New London, Connecticut, under his old master, Capt. John Spicer.

These were not whaling voyages, but rather trips to provision the whaling stations operated by the New England firm of C. A. Williams.

Williams’s stations were usually manned by two white men who employed Inuit crews in whaling, and also traded for the products of their hunting and trapping. The Era brought provisions, coal and trade goods, and took home the products of the previous season.

In 1893 Comer had his first taste of an Arctic winter. He sailed aboard the Canton to Hudson Bay, a voyage that lasted 15 months.

The ship wintered at Depot Island, just to the north of Chesterfield Inlet, and Comer had his first opportunity to interact with the Inuit for an extended period of time.

In 1895 he was finally master in his own right, taking over as captain of the ship, with which he was so familiar, the Era. He took her to Hudson Bay and wintered near Cape Fullerton, about 100 km north of Chesterfield Inlet.

He would come to know the area and its Inuit well, for on each of his following three voyages, all as master of the same ship, he wintered there for two consecutive winters.

American whaling in Hudson Bay had begun in 1860, as a result of the American experience in Cumberland Sound in the previous decade. In 1860, two American ships wintered at Depot Island; when they returned south the following year one of them carried a larger amount of whalebone than any American ship had ever taken in the Davis Strait and Cumberland Sound fishery, and the other’s cargo was almost as large.

This news spread like wildfire in New England. In the following decade there were 57 American whaling voyages to Hudson Bay.

But whales were a finite resource, and stocks declined quickly. The Scots were late coming to Hudson Bay but, when they did, they exploited the same stocks that the Americans continued to deplete.

By the time Comer arrived, whale stocks were seriously diminished. He took whales, to be sure, but he also traded extensively with Inuit for the products of their hunt on land and sea.

Still, Comer was that rarity in these difficult times, a whaler whose voyages almost all turned a profit for his employer. On his 1897 voyage, for example, which wintered twice at Fullerton, he took 15 whales which yielded 185 barrels of oil and 18,000 pounds of whalebone.

On his voyage in 1900, he brought home 130 barrels of oil and 7,000 pounds of bone, but also 398 musk-ox skins, 69 wolf pelts, 51 polar bear skins and 8 wolverine skins. Every bit of produce from the land helped offset the decline in whale products.

Comer employed Inuit to complement the work of his American crew. Most were Aivilingmiut, as they were native to the Fullerton area.

But he also hired Netsilingmiut and Qairnirmiut, who had come to Fullerton Harbour for the employment and trade opportunities.

Over the long winters he got to know them. He got on well with them and developed considerable fluency in their language. In 1912 he wrote in his journal while wintering on the A. T. Gifford about exchanging stories with the men:

“Some of the native men come in to the cabin most every evening and I tell them about the outside world, or what the white people do, and also give them Bible stories or ancient history. In this way I get many stories from them of their customs and traditions.”

George Comer was far more than just a whale man. He was also an astute observer of the Inuit and their customs. It was because of his passion for photography, which he started as early as 1893, that the Inuit gave him the name “Angakkuq.” It means “the shaman.”

Many years ago an Inuk, Joe Curley, told the researcher Dorothy Eber, “I remember Captain Comer. We used to call him Angakkuq— the shaman— because he was able to take photographs. They would appear just like that, out of a piece of paper.”

And Leah Arnaujaq of Repulse Bay remembered, “Ah, Angakkuq, with his little bald head; he was a shamanistic person!”

Kanajuq Bruce in Coral Harbour told Eber in the 1980s, “Angakkuq was a very likeable man. He got his name because of the photographs and because he had those little technical things that would wind up. People here never used to have those mechanical things.”

“Those mechanical things” included gramophones, with which he entertained the Inuit, and devices on which he recorded traditional songs, dances and stories on wax cylinders. These were the first sound recordings of North American Inuit.

Captain John Spicer introduced Comer to the anthropologist Franz Boas of the American Museum of Natural History, who recruited him to collect artifacts, clothing, skeletal material and legends.

Comer made 220 plaster casts of Inuit for the museum; 177 of them were faces. His photographic collections survive today as glass plate negatives at Mystic Seaport, Connecticut, and as prints at the natural history museum.

Like James Mutch, the Scots whaler who also collected for Boas, Comer was a rough and untutored ethnographer. Our knowledge of the material and intellectual culture of the Inuit of western Hudson Bay owes much to him.

Comer eventually retired to his home in East Haddam, Connecticut, a home filled with memorabilia from the North. He died there in 1937.

Next week, I will write about Comer and his relationship with an Inuit woman, Nivissannaq.