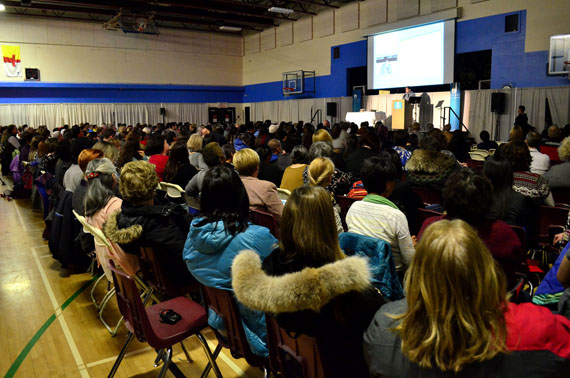 Hundreds of people from Nunavut and around Canada listen to Natan Obed, the president of Inuit Tapiriit Kanatami, speak Oct. 27 at the Canadian Association for Suicide Prevention’s conference in Iqaluit this week. (PHOTO BY JIM BELL) 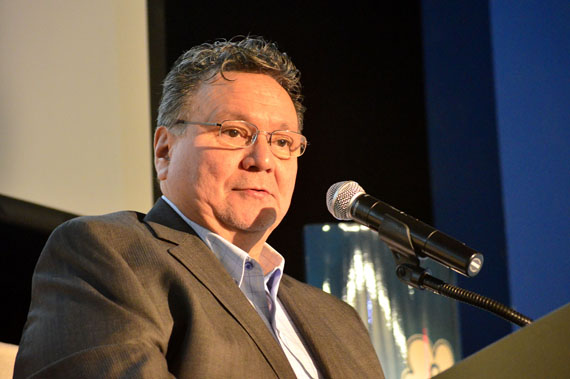 Nunavut Premier Peter Taptuna said that after the special inquest on suicide in Nunavut in September 2015, he realized the Government of Nunavut must do more on suicide prevention. (PHOTO BY JIM BELL) 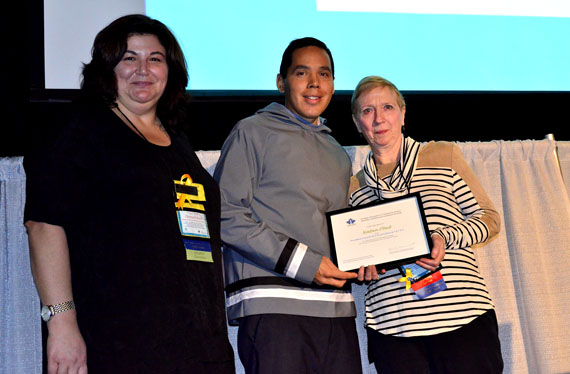 Canada’s national suicide prevention organization took its message of hope, health and healing this week to a land of deep wounds and shattered hearts, Inuit Nunangat, where more than 750 Inuit have died by suicide since the early 1980s.

The Canadian Association for Suicide Prevention, a national organization made up of caregivers, researchers, health professionals and volunteer activists, is meeting in Iqaluit from Oct. 26 to Oct. 29.

Joining them are delegates from nearly every community in Nunavut, including youth, elders, health care workers and many tireless volunteers.

And despite the dark issue that brings them together, participants began the conference on a note of optimism.

“We have incredibly resilient people and we also have people who care,” Natan Obed, the president of Inuit Tapiriit Kanatami, said in a keynote speech and presentation given on the morning of Oct. 27.

Conference participants have been offered a lengthy program of workshops, presentations and panel discussions on such subjects as the damage inflicted on Inuit by historic trauma, best practices for volunteer counsellors, and mental wellness training.

Many sessions will focus on bullying, and on that issue, Carol Todd, mother of Amanda Todd, who died by suicide in 2012 after being harassed, stalked, cyber-bullied and beaten up by other teens.

Carol Todd and Travis Price, a well-known anti-bullying activist, were to have given a joint presentation on the morning of Oct. 28.

They replaced the widely-admired Sen. Murray Sinclair, the former chief commissioner of the Truth and Reconciliation Commission, after Sinclair was detained in Ottawa by an issue that prevents him from travelling.

Meanwhile, participants at the Oct. 27 morning session gave Obed a standing ovation after a presentation on the National Inuit Suicide Prevention Strategy, released this past July.

“When a person dies by suicide they leave a lesser world for all of us that are left behind… the world is not as great a place as it could have been,” Obed said.

In his presentation, Obed said the biggest challenge that ITK faced when developing its suicide prevention strategy was to develop “a shared understanding.”

“The thing we are still struggling with is a shared understanding of suicide and suicide risk factors,” Obed said.

And such a shared understanding means acknowledging the evidence that reveals the many factors that put Inuit at risk for suicide—and at the same time, promoting Inuit-specific policies that reduce those risk factors.

For example, he referred to a recent session among MPs in Ottawa during which numerous politicians made emotional statements of sympathy.

“That’s all well and good but that is not an output of government… The showing of sympathy is the first step, but it is not the same thing as action,” he said.

And Obed explained how these factors not only combine, but compound with each other to magnify the risk of suicide among people whose psyches are continually wounded as they grow from infancy into adulthood.

For example, about 50 per cent of Inuit women have reported being sexually abused in childhood.

That kind of adversity, combined with other sources of trauma, can reverberate through society, Obed said.

And another factor, acute stress and loss, affects nearly everyone in Inuit Nunangat regions—because of the high rate of death by suicide.

“We have to accept that we are all at risk,” Obed said.

But at the same time, “some people are stronger,” he said, pointing to protective factors like strong families, cultural continuity and healthy children.

But for people in Inuit Nunangat, access to services, such as treatment centres, is rare.

To illustrate that, he displayed a map of Canada pinpointing the many Indigenous substance abuse treatment centres that the federal government has funded through the National Native Alcohol and Drug Abuse Program, also known as NNADAP.

But not one of those treatment centres is located in Inuit Nunangat, he said, an example of the inequity that the small Inuit population in Canada must deal with.

This kind of thing happens because Inuit are a “minority within a minority” whose needs are often overshadowed by or confused with the needs of First Nations who comprise a much larger proportion of Canada’s Indigenous population.

“We have a long way to go in creating social inequity in health funding… when people need help, they should get the services they need,” he said.

Nunavut MP Hunter Tootoo said he supports the creation of a national suicide prevention strategy in Canada, and Nunavut Premier Peter Taptuna listed the things that the Nunavut government has done since September 2015, when a coroner’s inquest jury recommended that suicide by deemed a public health emergency in the territory.

“I knew we had to do more,” Taptuna said, saying that since then the GN has put $24 million more into mental wellness programs.

“As a result of the inquest, I declared suicide a crisis in Nunavut…” Taptuna said.

The conference ends on the evening of Oct. 28, with a gala dinner and fundraiser at the Frobisher Inn.