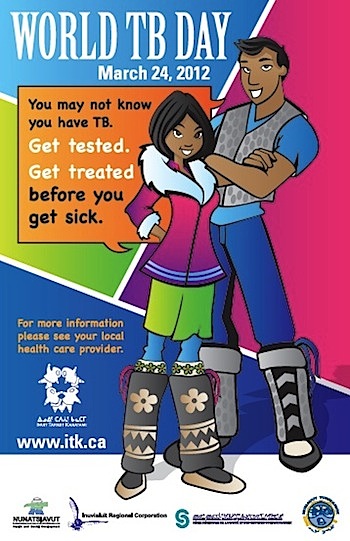 Here’s an English-language example of the posters that Inuit Tapiriit Kanatami has distributed throughout the North. (IMAGE COURTESY OF ITK)

With tuberculosis rates among Inuit, the highest in Canada, “vigilant action in all Inuit regions of Canada is required to stop this upward trend,” said Mary Simon, president of Inuit Tapiriit Kanatami, March 23.

The latest figures released by the Public Health Agency of Canada “paint a disturbing picture of the Inuit TB rate,” Simon said in a March 23 statement.

These show the TB rate is even higher among Inuit than the numbers handed out to reporters by the Government of Nunavut’s health department on March 23.

Additional figures from the Public Health Agency of Canada, cited by ITK, show the Inuit TB rate is 284 times the rate for the Canadian-born non-aboriginal population.

“There is good work being done in our communities, and there is still much work to be done,” said Simon. “I congratulate the organizers of the successful Taima TB pilot project in Iqaluit for engaging local residents, health authorities and governments in this community-based intervention program. This approach is already demonstrating positive results, and with the right support it can be shared and with other communities throughout Inuit Nunangat.”

Inuit from across Canada are collaborating on a national action plan aimed at eliminating TB among Inuit, Simon said.

That plan should be released later in 2012.

The key message of its message to communities is “you may not know you have TB. Get tested. Get treated before you get sick.”

Posters spreading this message, along with t-shirts affiliated with the global “Stop TB” campaign, are making their way to Inuit communities across Canada in time for World TB Day, which falls on March 24, Simon said.