Ponds may be a “hidden source” of greenhouse gas emissions 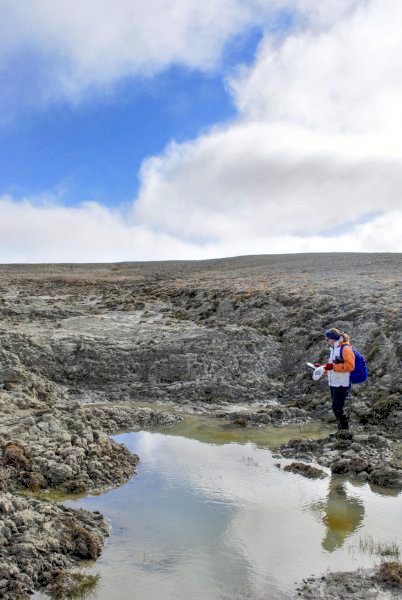 A researcher collects data from a pond in the High Arctic near the Cape Bounty Arctic Watershed Observatory in Nunavut’s Melville Island. (PHOTO COURTESY OF MELISSA LAFRENIERE)

A new Canadian study has found that carbon released by some ponds in Nunavut’s High Arctic may be “a hidden source” of greenhouse gas emissions.

Water samples from 14 river and six pond sites collected in early August of 2014 and 2015 near the Cape Bounty Arctic Watershed Observatory on Melville Island show how dissolved organic carbon stored in Arctic permafrost—thawing at an accelerated rate due to climate change—is being released into Arctic watersheds.

The chemical composition of carbon in the ponds was different than in rivers in the High Arctic, researchers from the University of Toronto reported in their study published in Environment Science and Technology

These ponds in the High Arctic seem to be “hotspots for the breakdown of dissolved carbon degradation,” they said.

To date, “very little consideration” has been given to what’s happening with dissolved carbon in these ponds that are all over the Arctic, said Myrna Simpson from the University of Toronto, in a news release about the new findings.

That dissolved carbon consists of decomposed plant or animal material that has come into contact with water, such as that released by melting permafrost. When the dissolved carbon settles into ponds, microbes digest it more easily than in rivers, which means that more carbon is released.

This means some ponds could potentially be an additional source of climate-warming carbon dioxide emissions released into the atmosphere, Simpson said.

The next step for the research will be to see how widespread this phenomenon is.

But carbon release isn’t the only possible fallout due to thawing permafrost as the planet’s temperature rises.

In another study published in Geophysical Research Letters that looked at thawing permafrost, researchers determined permafrost contains “twice as much mercury as the rest of all soils, the atmosphere, and ocean combined,” and suggested its release due to global warming could be devastating.

Mercury is a naturally occurring element that is also released into the environment by activities such as burning coal and mining.

More mercury in the environment is troubling because information cited in the 2015 Human Health in the Arctic report cited a number of bad health effects already connected to mercury in Arctic residents, including high blood pressure in adults, a decreased heart rate for children and semen quality in men.