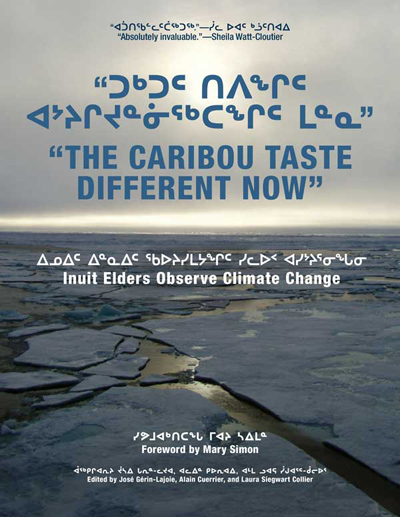 Climate change has already altered the Canadian Arctic environment and the traditional lifestyle of the people who inhabit it.

In recent decades, Inuit have seen changes to local plants and wildlife and the introduction of new species as seasonal norms shift and permafrost melts.

That’s impacted how Inuit eat — how communities access their country food and in what quantities. But what about how that food tastes going down?

A new book published by Nunavut Arctic College’s NAC Media goes a long way towards illustrating that, while the seasons and landscape are changing, so too is the quality of the local harvest.

“Nowadays… the ripeness of the berries is changing, and the taste,” said Mona Tiktalek, an elder in Kugluktuk. “They don’t taste so good as they used to… and sometimes when they ripen some of them dry right away.”

Tiktalek is quoted in the new book The Caribou Taste Different Now: Inuit Elders Observe Climate Change, a 300-page book detailing observations on climate change from across the Inuit Nunangat.

About a decade ago, a group of researchers from universities in Quebec, Newfoundland and British Columbia joined forces to study the impact of a changing climate on tundra vegetation in the Canadian Arctic.

Between 2007 and 2010, researchers interviewed 145 Inuit between the ages of 44 and 92 in different communities in Nunavut, Nunavik and Nunatsiavut.

The changes they reported were not uniform across the Arctic, but the book offers one clear message — all Inuit have observed change of some sort.

“The blueberries are not like long ago; we used to get really big blueberries,” Kohohtak said. “Now we don’t get very much rain and we just get small little blueberries. The taste is different. They are not as sweet.”

At the same time, elders interviewed in the book almost all agree that they’ve seen an increase in the abundance of plant life around their communities east and west, including berry plants, but also willow, dwarf birch and alder.

That’s likely due to a longer growing season; most Inuit elders say each of their regions see earlier springs, longer summers; longer autumns and shorter winters than ever before.

But growing conditions in those different regions can vary.

“The creeks [that were here] when I was child, they don’t exist anymore because there is less water,” said Umiujaq elder Joshua Sala. “There are no more creeks. Those lakes, the big ones, are going to stay for a while, but some smaller lakes or ponds will become dry.”

“There are some places where you walk or places in trees that seem to be drier now,” observed Billy Tooktoo. “When I was little the lichens used to be slippery, but now they crunch when you walk on them.”

Changes to vegetation on the tundra, while slow and gradual, have had an impact on the wildlife that rely on plants for food.

Almost all elders interviewed in the book noted changes to the presence of wildlife around their communities, particularly the caribou, a long-time staple in the Inuit diet.

“The caribou go out early and come late,” observed Lukasi Nappaaluk, an elder from Kangiqsujuaq, located on Nunavik’s Hudson Strait.

“They start to arrive now [in July] instead of May, two months late. They go out to the land one month early… I hope they stay here a bit longer [this year] so we can catch the caribou and freeze it and use it for the winter.”

In regions where the caribou hunt is still strong, many Inuit note the caribou are thinner and that the taste of the animals’ meat has changed.

“To me [the caribou] seem a lot skinnier that they were before,” said John Jararuse, an elder from Nain in Nunatsiavut.

“Sometimes it seems like they have no fat, especially stags (males). We used to have thick ones before, but it’s not like it used to be anymore.”

“The caribou taste different,” said Nain elder Annie Lidd, a comment that went on to name the new book.

“I don’t know what they’re eating,” she said. “Some of them are sick or something; there’s not enough patik (marrow) on their bones.”

Other elders from the community described the taste of local caribou marrow as “watery.”

“When they’re in the country, way inland, they eat lichen, but these years they go more on the beach and they’re eating the trees here,” said elder Edward Flowers. “And when you eat [caribou meat] the taste is like the trees here.

The book is published in both English and Inuktitut, and available for sale at Ventures in Iqaluit or online at amazon.ca.