The Inuit tragedy: a northern dead-end

An English translation by Nunatsiaq News of an article reporting a recent homicide in Puvirnituq, published Feb. 25 in La Presse 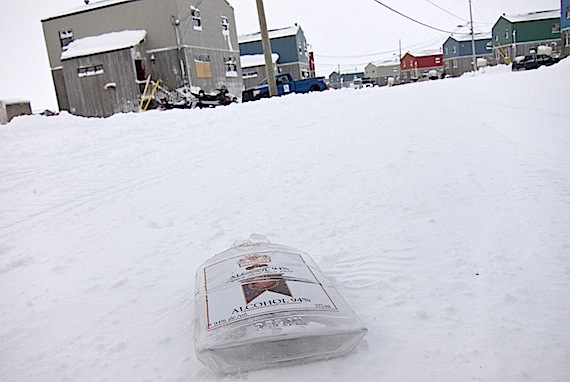 An empty mickey lies on the ground in Puvirnituq. (PHOTO COURTESY OF LA PRESSE)

PUVIRNITUQ — “I have three kids and a nice husband […]. He has always helped me, for everything, I’ll never leave them, ever. Thank you, God, for giving me these four boys. I love them so much! For the rest of my life! ”

That’s what Talasia Tukalak wrote on the personal profile of her website page. Big red hearts cheer up the text, which includes photos of Talasia, radiant in her wedding dress. Next to these, we see her husband, Putugu Tukalak.

On Jan. 26, the young 26-year-old woman took her last trip. She travelled back home to Puvirnituq, a small village of 1,400 in northern Quebec. We were aboard the same flight.

She was returning home on Air Inuit after spending several weeks in Montreal, where she gave birth to her fourth child. She had to leave her one-month-old baby behind. His health required specialized care.

When the aircraft landed on the snowy tarmac, the sky was clear blue. The snow crunched underfoot. The sun lit up the flat and icy landscape around this community, located about 60 kilometers from Hudson Bay. A peaceful Sunday. Only the roar of snowmobiles racing around the frozen river broke the silence.

This quiet happiness was suddenly turned upside down. That evening, in the heart of the polar winter, Talasia was killed. Stabbed dead. Her husband, who she adored, is accused of murder.

It was he who called the police to tell them about the tragedy. The three other children of the couple, aged eight, three and two years, were present. They were temporarily placed with their paternal grandparents.

The news spread quickly in the small community. The next day at noon hour, a commotion blocked the road on the way to school. A woman was crying loudly. She had just learned about the death of her friend.

The community was dazed and confused. Nothing pointed to this kind of tragedy. The family had a bright future. Many praised Putugu Tukalak when he worked as a support teacher at the local school. Last summer, he was part of the team that represented the village in the 15th eastern Arctic summer games.

But, like many others, the couple was caught up by the social problems that are ravaging Nunavik’s 14 communities. Alcohol and violence are an explosive combination.

Crime has risen in recent years, according to figures from the Kativik Regional Government. The police are better trained. They are able to do more prevention and respond to more calls, which helps explain the increase in the numbers.

But the fact remains that Nunavik is grappling with major addictions to drugs and alcohol. Problems that increase violence and the number of murders.

Domestic violence is part of daily life. Everyone knows about it. But many remain silent. They pretend not to see the bruises on the arms of a co-worker.

The prefabricated wooden and aluminum houses are built close together. It’s not uncommon for three families to be packed tightly inside a dwelling, for lack of housing elsewhere. When you hear someone screaming too loudly in the house next door, you simply turn up the sound on the television.

“Violence is a huge problem,” admitted Lizzie Aloupa, a prevention counselor with KRG.

Alcohol problems are growing and make the poverty even worse. Marijuana is also everywhere. It’s not hard to buy some. Barring a blizzard, airplanes bring up cargo every day. A “Mickey,” 10 oz. bottle of hard liquor, sells for $100.

Plan Nord, promoted by the Charest government, does not inspire much hope. When asked about the issue, Inuit shrug. Apart from housing, there’s nothing specific to help communities deal with social problems.

Many fear the impacts of economic development. When cheques from mining royalties arrive in the villages, there’s an immediate boost for alcohol consumption and violence. What will happen after Plan Nord, Aloupa muses, echoing the concerns of many.

When the worst happens, the violence escalates into murder, then the major crimes division of the Sûreté du Québec provincial police gets called in to help.

Investigators come Nunavik once every two months, sometimes more. That’s a lot for a territory of only 11,000 people.

The village of Puvirnituq is frequently hit: four murders have been committed there over the past six months.

Even before the plane lands, word goes around on the community radio: the investigators are coming soon.

“Collaboration is generally very good,” said Capt. Sylvain Baillargeon, head of the major crimes division. First, the police meet with the mayor to explain their approach. That’s because the mayor often the one who helps them find witnesses or finds an interpreter to translate into Inuttitut.

The command post is set up at the town hall or school. The investigation takes place just like it does anywhere else, but the police try to adapt to local culture. There’s no question, for example, that they’ll interrogate any witnesses past 10 p.m..

In return, the community is welcoming. Inuit bring a meal come to the police. That’s appreciated when there’s no restaurant in most villages.

In less than 36 hours, the investigation is generally complete. “In Nunavik, the killings are often linked to an argument that escalates,” said Capt. Baillargeon.

When all relevant information is collected, investigators sometimes agree to a move that would be more difficult in southern Quebec: relatives or municipal officials may be allowed to speak to the suspect or see the victim’s body one last time.

The sun isn’t up yet, but the cold is intense. The motor of the small plane starts somehow. The investigators head back south with the suspect who will appear before a judge.

Outside the school, flags are flown at half-mast in memory of Talasia. That’s what happens every time there’s a murder or a suicide. On the day of the funeral, the village is numb. No school. No work. The whole community joins in the funeral.

People cry. Intensely. Then they move on. And tragedies keep on happening.

Nunatsiaq News will continue to print more translated articles from the recent La Presse series. For reaction to the series, go to a Feb. 29 Nunatsiaqonline.ca story Quebec newspaper articles outrage many Nunavik Inuit.