An English translation by Nunatsiaq News of an article on education in Nunavik, published Feb. 27 in La Presse 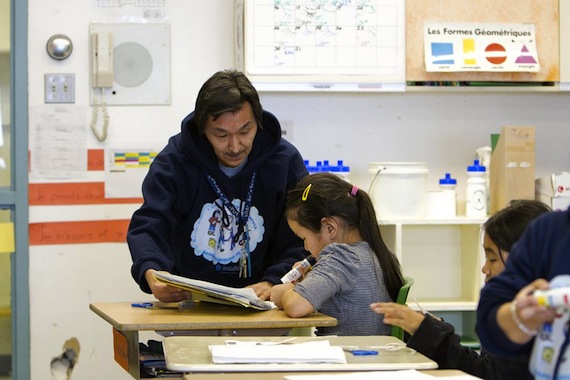 Harry Quara, a behaviour technician at Puvirnituq’s Ikaarvik school, talks to a young student. “At first I thought my new role would be difficult. Now I feel better. Young people know me, they see me in the village, they trust me,” says Quara. (PHOTO COURTESY OF LA PRESSE)

PUVIRNITUQ — When teachers arriving from the South come off the plane a few days before school starts in September, they usually know nothing about Inuit culture or traditions.

At best, they manage to stammer “hello” or “thank you” in Inuktitut.

The first shock is experienced in class. Students arrive consistently late. They go out in the middle of a class without permission. They speak in Inuttitut among themselves. Classes are lax, disorganized. Students bring complex family problems into school. The teacher wants to impose her or her ways of the South, and children revolt.

Helpless, some teachers pack their bags after a few months. Others finish out the school year and return to the South. Some, more rarely, are attracted by the region and settle there for a few years.

The turnover rate is high. At Iguarsivik school, which includes students from Grade Four to Secondary Five, half of the teachers from the South are rookies. Some students have seen a turnover of five teachers in one class since September. Nothing about this enhances learning.

“People do not engage easily. They know that all white people are passing though. For one year, five years or 10 years, we are just passing through,” reflects Richard Therrien, the new school principal.

Therrien spent six years as principal in another village in Nunavik before moving to Puvirnituq at the end of the summer. After all these years, he’s gotten to know some of the subtleties of Inuit culture.

But now he’s back to square one. He must get to know new students and especially their parents. Often, they don’t speak English or French. “It would be easier if I spoke Inuttitut,” he says.

The teacher came in mid-October, when the school year had already started. He did not have too many expectations, but he hoped to make some impression on children. “As they say, I do my best, but I’m not sure if I helping them. What’s I’d reallylike is to, make them succeed. ”

The first year of teaching in the North is always difficult, no matter what, argues Paulusi Angiyou. A native of Puvirnituq, he teaches Inuktitut to high school students.

“It has nothing to do with the fact of speaking Inuktitut or French or English or Spanish — it’s the confidence you have. Too often, the new teachers who come from the South lack that,” he says.

The challenges faced in the North are not much different from what’s experienced by immigrants or in poor neighborhoods. There too, the dropout rate is high.

But in Nunavik, the villages are isolated. They’re desperately short of resources, especially in the social field. Communities help each other a lot, but they’re still on their own.

Many children are sexually abused. Many see their parents fight. And no one can ignore the empty liquor bottles lying around on the way to school. This violence catches up with students. They’re like small volcanoes threatening to erupt.

“I’ve had crises,” says Marie-Josée Trudel, who teaches Grade Six. “I got bitten, threatened with a knife, push into the desks, I got hit in the stomach. […] Sure it’s disturbing, but I try to understand them. ”

When the crisis breaks out, teachers calls in one of three behaviour technicians who work in Iguarsivik school: they’re Inuit.

This early February morning is hectic. A Grade 4 student, with a stubborn face, refuses to cooperate. She down throws her pencil and glue stick across the classroom.

Moments later, Harry Quara enters the classroom. Quietly, he speaks in Inuttitut to the young student.

“At first I thought my new role would be difficult. Now I feel better. Young people know me, they see me in the village, they trust me,” says Quara who, like many others, hasn’t graduated from high school.

Earlier this year, Louise Pellerin, Grade Four teacher, asked her students what they wanted to do later. Many have shrugged, unable to respond.

After the holidays, she asked again. There’s progress. Some say they want to work at the Co-op, local store or at Air Inuit.

“I’d like to see more young people graduating. I would like to see that they can do things. They think they’re not. That the positions of doctors and nurses at the hospital, those aren’t for them. They think they can just work at the Co-op, at Air Inuit, at the child care centre. I want them to know they have great potential.”