The Inuit tragedy: Nunavik drops out

An English translation by Nunatsiaq News of an article on education in Nunavik, published Feb. 26 in La Presse 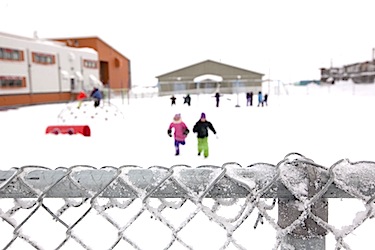 Less than one in five Nunavik students will graduate from high school. (PHOTO COURTESY OF LA PRESSE)

PUVIRNITUQ — Every morning, when the bell rings at the start of classes, the same scenario repeats itself. The classroom of 17 students, which includes students from secondary levels three, four and five [Grades 9 to 11 in Nunavut], is practically deserted.

Only a few students come in on time. Minnie, 17, and Stevie, 19, are generally among those few.

She moves to the front of the class, facing the blackboard; he selects the row of desks overlooking the window.

He has a view of the village of Puvirnituq, whose prefab homes are covered with strips of wood, painted red, blue or green. Small patches of color in the white landscape of the Arctic.

Rolland Glaude generally waits a few minutes before starting. He looks down the hall to see if a few stragglers are there. He knows in advance that half the students will be absent.

The teacher doesn’t bat an eyelash when students leisurely arrive, one after the other, sometimes still wearing their coats, as the class progresses. The important thing is that they came.

In Nunavik, barely one in six students graduate from high school. The dropout rate is high, reaching nearly 80 per cent. In this remote region, where there is no road, the challenges are many.

Social problems are reflected in school

In early February, the wind raises clouds of snow. You can hear a snowmobile whipping by.

A small group of children hang around the village’s only hotel. A little further on, two little kids run around a house. They can’t be more than six years old. A boy hits a puck into the street. The impact produces a thud that echoes because of the cold. The thermometer reads -35 C.

Some children play outside by habit. For others, it is to escape the problems that occur frequently in overcrowded homes, where up to 15 people live.

Students feel that the next day at school. In the Grade 4 class of Louise Pellerin, 12 students are in school that morning. But they’re tired. They have difficulty concentrating.

Mosesie, 11, stares at his worksheet for several minutes. He yawns. He tells the teacher he went to sleep at midnight.

Colette Major gestures while singing children’s songs. That’s one way to help students better learn to understand French. In Nunavik, children go to school in Inuttitut — their mother tongue — until Grade 3. After that, the instruction is only in a second language, English or French — the languages that students must take exams in at the end of high school.

While the teacher talks to the class, Annie gets up, whispers in the ear of Paulusie. Clara-Leah is struggling to keep still. She constantly fidgets in his chair. Maina-Lucy ends up sitting on the floor in a corner of the classroom, to better concentrate.

The teacher changes activities every 10 minutes to keep students’ attention. She switches from number series to vocabulary words and then to multiplication tables.

“Louiiise, Louiiise …” The little ones are always buzzing around to show their work. They want her attention.

“We can’t say that all these children are neglected, but they don’t always get the attention they need at home. They will find that attention in school. ”

Many children come from dysfunctional backgrounds. The father of one is in jail, the mother of another was stabbed, a third lives in foster care.

Most teachers agree that before worrying about expected educational outcomes, you need to make sure the children enjoy coming to school. That they feel secure. You never know, the spark to learn may well eventually grow stronger.

“You might say it’s getting harder and harder with he children, their behavior. […] The children have tantrums. Not all of them, but there are more than before,” says Maata Putugu, the assistant director of Iguarsivik school.

“Because of what’s happening at home?

Because of what’s happening in the community, maybe. ”

The situation has gotten worse in recent years. In the mid-2000s, the school had a dozen graduates each year. Now, they who graduate number only five or six.

The Kativik School Board, which oversees the delivery of education in schools in Nunavik, follows the program of Quebec’s education department.

But some courses are tailored to reflect the reality of the North.

During culture class, students learn the traditions of their ancestors. The girls sew kamiks, the traditional Inuit boots, by hand, while boys build an igloo to learn how to survive on the tundra.

The challenges remain numerous. Learning a second language is as much a window to the world as a barrier. Nearly 90 of students who reach high school are behind in their studies.

“The majority of our students have special needs, but they do not know where to turn for their problems. We have no support in place for now, we need human resources, money, a strong and organized organization,” says the new president of the school board, Johnny Kasudluak.

Keeping students in school is one of his priorities. But the path is difficult. The handful of students still at school in Secondary Three, Four and Five shows that.

Graduation rates in high school after seven years: 17.8 per cent

Students with who are late entering secondary school: 92.8 per cent