The federal government must grant the extension the commission seeks 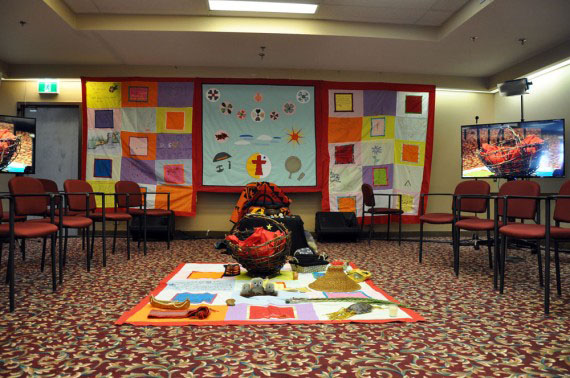 The conference room at the Siniktarvik Hotel in Rankin Inlet where the National Inquiry into Missing and Murdered Indigenous Women and Girls held a three-day hearing this past week. (PHOTO BY SARAH ROGERS)

These represent just a few examples of the language used in national media reports over the past year and a half to describe the internal difficulties that have bedeviled the National Inquiry on Missing and Murdered Indigenous Women and Girls since its creation in September 2016.

Complaints, many related to communications, began even before the original five MMIWG commissioners had leased office space, hired staff, installed phones, set up computers and built their multilingual website.

We don’t have space here to list all the resignations and dismissals that have made their way into the news over the past year and a half. They include the abrupt departures of one commissioner, two executive directors, a lead commission lawyer and more than a dozen other staff members.

In response, many Indigenous leaders have demanded the MMIWG commission be bulldozed away and rebuilt, in a “hard reset.” Some, in remarks occasionally prefaced with quasi-libelous personal insults, have demanded the resignation of the inquiry’s soft-spoken chief commissioner, Marion Buller.

Others have demanded that Crown-Indigenous Relations Minister Carolyn Bennett step in to intervene. That, of course, would destroy the commission’s credibility. The whole point of a commission is that it be accountable only to itself, free of government meddling.

But amidst all that controversy, the remaining commissioners and staff members persevered and kept on working.

And it’s to Nunavut’s benefit that they managed to soldier on. Had the MMIWG commission undergone a “hard reset” their important three-day public hearing in Rankin Inlet last week might never have been held.

Thanks to the gutsy testimony of those witnesses who spoke in public, dark secrets usually kept hidden by fear, institutional denial, and community codes of silence were exposed.

They described hideous abuses of children and women from which numerous families continue to suffer, and how badly damaged women are made vulnerable to the homicidal rage of equally damaged men, or to ruthless criminal exploitation by male predators.

They also described how police, courts and even women’s shelters fail to protect them from violence.

And they described how government fails to provide them with the counselling and psychiatric care that could help repair their ravaged psyches.

“It’s very, very fearful when we get beaten up in a drunken state. There’s no place to go. There’s no shelter. There’s no one to talk to,” one witness said.

Another witness described how in 2009, 29-year-old Sula Enuaraq was turned away from the women’s shelter in Iqaluit, just days before she and two of her children were shot and killed by her partner, who turned a gun on himself and died by suicide in front his late sister’s grave.

Another witness, from the same family, told the commission that “the mental health system in Nunavut is an absolute farce.” Based on the facts presented to the inquiry last week, that’s an accurate assessment.

Other witnesses testified about how Nunavut communities fail to protect their own. One described years of beatings, torture and sexual abuse at the hands of an aunt.

Another, Laura Mackenzie, testified how her aunt, Betty Kaleserk, was sexually abused as a child—and that no one was willing to do anything about it. The trauma this produced led to addiction and death by suicide.

“She couldn’t overcome the sexual abuse she had encountered for many years, and no one seemed to want to help. The family and community—maybe in shame—would not speak about or report the abuse,” she told the commission.

And she said that shameful code of silence persists to this day and is likely protecting whoever killed 11-year-old Ray Taparti of Rankin Inlet, whose homicide last summer has yet to be solved.

Then there was the stunning disclosure of Susan Aglukark, who named the Rankin Inlet man, Norman Ford, who sexually abused her when she was a child. It’s not his identity that makes that gesture so remarkable. It was the act itself: a declaration that the code of silence holds no sway.

At the same time, commissioner Qajaq Robinson last week demonstrated that complaints made in 2016 about her appointment, based on her non-Inuk family background, are groundless. Her work at the hearings was superb. So was the work of the team who organized the event.

In the fall of 2016, Keith Peterson, then the Nunavut justice minister, issued an order-in-council—a directive from cabinet—declaring that while operating in Nunavut, the MMIWG commission is empowered by the Nunavut Public Inquiries Act.

This means that in Nunavut the MMIWG commission wields all the powers of a territorial board of inquiry. That gives them the power to examine matters that fall within territorial jurisdiction and the legal ability to compel the production of documents and the appearance of witnesses. All other territorial and provincial governments have done this also.

So we hope the commission’s research staff follow up on what they heard in Rankin Inlet last week and examine the territorial government memos, emails, police reports and other relevant materials related to the irredeemable tragedies they heard about last week.

In 2016, the GN said they want MMIWG commissioners to ensure they examine domestic violence in Nunavut and its root causes. Doing that will require careful examination of both spoken testimony and documentary evidence.

As for the MMIWG commission, it should be obvious now that the federal government gave it too much to do and not enough time to do it in. The commmission ought to be been allowed a full year to vet and hire qualified multilingual staff, set up offices and build the communications and research infrastructure required to support the work of its commissioners.

Instead, they were required to build a complex national organization from scratch in just a few months, hampered by outdated computers, obsolete cell phones and onerous federal regulations.

Notwithstanding all that, the MMIWG commission demonstrated last week that it ought to continue until its work is completed. The federal government must grant them an extension of at least one year and provide whatever funds are required to make that happen.JB