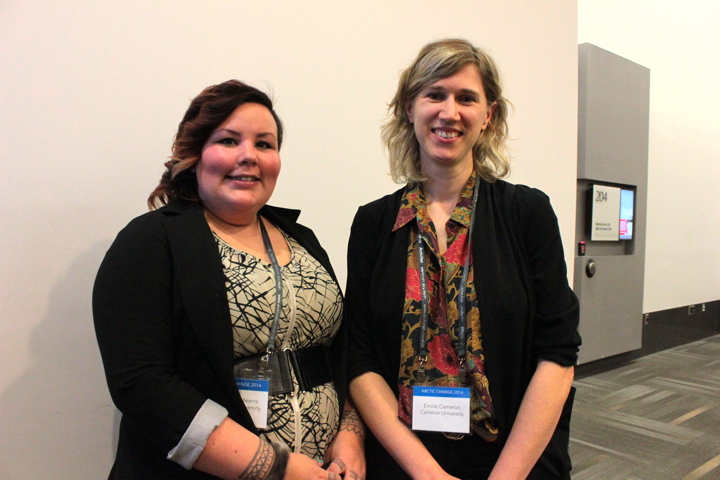 Becky Mearns, left, a student in geography and environmental studies at Carleton University in Ottawa, and her instructor Emilie Cameron, co-authored a paper, published in December 2014, deconstructing how climate change concepts are translated into Inuktitut. (PHOTO BY LISA GREGOIRE)

Words have the power to change and define how we feel about something. Politicians know this. So do media.

And so when leaders and communicators use certain words over and over to define concepts or ideas, those words become embedded in our vocabulary — sometimes without us even realizing it’s happening.

Becky Mearns and Emilie Cameron, a graduate student and an instructor, respectively, at Carleton University’s department of geography and environmental studies, have been thinking about this for a while, specifically when it comes to translating climate change concepts into Inuktitut.

After some research and discussion, the two discovered a few curious things.

A decade ago, policy papers, research, government documents and even Inuit organizations, focused on climate change as a human-caused phenomenon that was impacting northern peoples more than any other population and that needed to be mitigated through the global reduction of fossil fuel consumption, among other actions.

But recently, the language from government officials and academics has changed from slowing down climate change and protecting northern peoples’ “right to be cold” to how northern people can learn how to adapt to the changes.

In other words, climate change has come to be seen as inevitable and Northerners are being instructed to be resilient to cope with the coming wave of impacts.

Policy documents and strategies recently released by the Government of Nunavut and Inuit Circumpolar Council, for example, reflect this new world view, the women argue.

Mearns and Cameron were interested in this terminology shift, and how it impacted the Inuktitut words used for climate change.

Their discussions lead to a paper they co-authored with Janet Tamalik McGrath entitled “Translating Climate Change: Adaptation, Resilience, and Climate Politics in Nunavut.”

The article appears in the December 2014 issue of Annals of the Association of American Geographers, the themes of which were presented publicly at the December ArcticNet conference in Ottawa.

“Adaptation and resilience shift the burden of responding to climate change from those who cause it to those who are most affected,” their paper says.

Cameron and Mearns explained why they wrote the paper once their talk at the Ottawa conference was over.

“When people do research about climate change adaptation in the North, I think many elders who participate feel very proud of demonstrating their resilience and adaptability,” Cameron told Nunatsiaq News.

“So we’re not discounting people’s tremendous resilience and adaptive capacities but more so, we point to the fact that climate change is not entirely an environmental issue, it’s a political issue and it’s an issue of injustice and harm.

The Inuktitut term most often used for climate change has been silaup asijjiqpallianinga, which refers to ongoing continuous change in sila.

But there are problems with this term.

When sila is translated back into English, it means climate, weather or environment but sila is a broader “super-concept,” Cameron and Mearns argue, which can incorporate air, atmosphere, sky, intellect, wisdom, spirit, earth and universe.

And so to say that sila is changing is obvious to Inuit: sila has always been in a state of flux and Inuit have changed along with it.

“To observe and adapt to change is one of the most valued and respected skills among Inuit,” the two researchers’ paper says. “It reflects not only great knowledge, skill and character but also a kind of alignment with the world and a refinement of spirit.

“Adaptation, in such a context calls on Inuktitut values and traditions of observation, patience, and commitment to knowledge.”

And when climate change concepts include the idea of resilience — annagunnarninga — that, too, is a point of Inuit pride.

When someone is suffering, Inuit often use the word ajurnarmat, the paper explains, as both “a statement of fact and an expression of sympathy” because it means both that “things are difficult” and “it can’t be helped.”

But to put the onus on Inuit to adapt and be resilient in the face of human-induced climate change, and to use traditional words to rally support for that plan of action is not only unfair, the authors argue — it’s political.

“The call for Inuit to be resilient is issued in a context where that resilience is already strained by intergenerational trauma; inadequate housing, social and health services; compromised food security; and poverty.”

If, instead, climate change was translated into Inuktitut to mean the unethical treatment of sila, then concepts of Inuit justice, conflict resolution and reconciliation and could be invoked.

“Within Inuit frameworks, healing and justice are only possible insofar as those who have caused harm acknowledge and account for their actions and work to restore harmony,” the paper states.

“It is those who cause and benefit from ongoing harm to sila, and its impacts on Inuit lives and lands, who are required to restore balance and right relations.”

The authors conclude that just as Inuit had to learn about and adopt the concepts of “private property” and “sub-surface rights” in order to negotiate land claims, so too must they adopt the concept that sila is changing because of human behaviour — something that may have seemed preposterous to traditional Inuit.

“One of the things we talked about is beginning that discussion,” Mearns said afterward, “and broadening that discussion with others in the North and to begin talking about terminology and to make that shift, to work together to shift the focus back to social justice.”