“It was fun being around other deaf people” 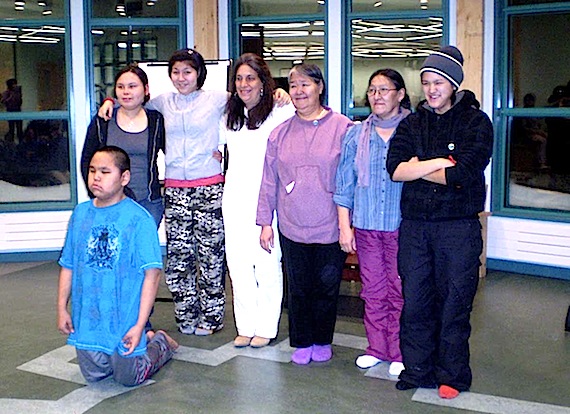 Today, it’s the main method that the Grade 10 student from Qikiqtarjuaq, who is deaf, uses to communicate with friends, family and educators.

ASL is the standard form of communication for deaf people in North America.

But the language, made up of hand and body gestures, is far from standard in the small communities of Nunavut.

And, Alookie is the only deaf student at Qikiqtarjuaq’s Inuksuit school.

That’s why support staff from the school, including Alookie’s interpreter Lorna Iqaalik and special needs teacher Karen Carnahan, decided to co-ordinate a sign language workshop in the community last month, perhaps the first of its kind in Nunavut.

Its goal: to help the group upgrade their sign language skills and learn new signs.

“But it was equally to network with other hearing impaired people and their families. For Angie, we wanted her to feel like she’s not alone,” Carnahan said.

The workshop focused on communication in daily living, such as asking for something, getting or giving information, and expressing likes and dislikes with ASL.

And instructors also used regional Inuit signs shared by some of the participants.

While Alookie also learns Inuit sign language at school, the teaching materials, developed by the Government of Nunavut, are relatively new and that version of sign language itself is much less advanced than ASL.

The workshop was great, said Alookie, through an interpreter.

“It was fun being around other deaf people and meeting their families,” she said. “I’d l