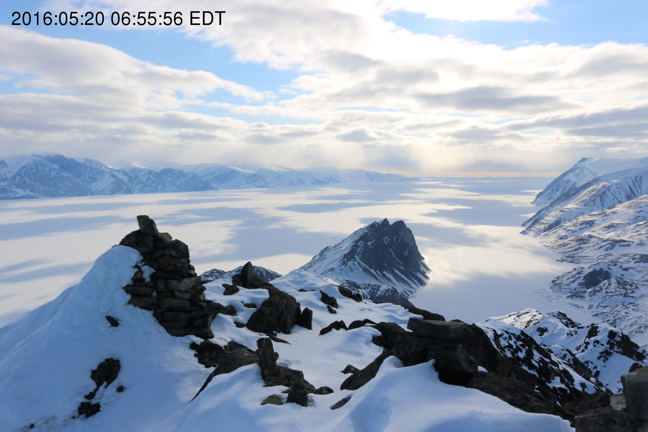 An image captured May 20, 2016, by the Oceans North camera at Mt. Herodier. If you go to the site now, you’ll notice that the current image is obscured. That’s because of snow partially covering the lens. It usually melts off within a few days. 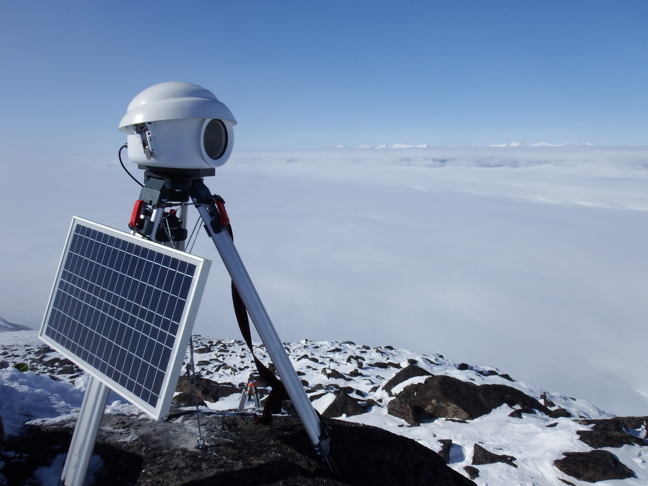 The camera, atop Mt. Herodier about 30 kms east of Pond Inlet on North Baffin Island, is enclosed in a plastic casing and powered by a solar panel and lithium-ion battery pack. 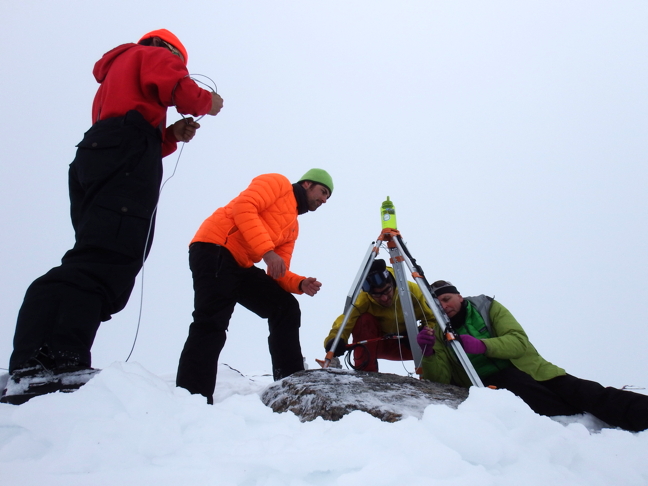 A team consisting of staff from Oceans North and the Université du Québec à Rimouski painstakingly install a tripod to mount a camera at Mt. Herodier near Pond Inlet. The camera is now sending images to a website to show local community members current weather and ice conditions in Eclipse Sound. (PHOTOS COURTESY OCEANS NORTH)

Imagine what it would look like if you stitched together hundreds of photographs, taken from a mountaintop, looking down onto Eclipse Sound in spring, as the ice thins, cracks and eventually, drifts out to sea.

You don’t have to imagine anymore.

In a remarkable time lapse film, made from hundreds of images shot from a location above Guys Bight near Pond Inlet, Oceans North has managed to capture the sound’s annual transformation from spring to summer — from the first major diagonal crack to floe edge, and then open water.

“It’s really spectacular. And we captured, successfully last year, the breakup of the floe edge which was, at least from an oceanographic perspective, quite a dramatic break up,” said Chris Debicki, Oceans North’s Nunavut projects director.

Oceans North, part of the PEW Charitable Trusts, installed the cameras in May 2015 to record changes in sea ice in Eclipse Sound during spring to show how long it lasts and how it behaves over time.

Aside from pure research purposes, Oceans North wanted to document the ice breakup in light of a proposal from Baffinland Iron Mines Corp. to send an icebreaker into the sound in spring so that it might ship more iron ore out of Milne Inlet.

The Nunavut Planning Commission turned down the company’s proposal but the company appealed to Ottawa to overrule that decision and send the proposal to the Nunavut Impact Review Board instead.

Then-Aboriginal Affairs and Northern Development Minister Bernard Valcourt granted that request and so the proposal is currently before the NIRB for assessment.

Oceans North, which supports the creation of a marine conservation area in nearby Lancaster Sound, and also supports local residents who worry that ice-breaking will impact their ability to travel and hunt on sea ice in spring, wanted to make sure the sea ice dynamics of that remote area were recorded for posterity.

So in March 2015, they set up two cameras on tripods powered by solar panels and lithium-ion battery packs.

Photos were taken every 30 minutes from mid-May to mid-August including the breakup event July 18.

The film, which you can watch here, will soon be available at the Pond Inlet visitor’s centre, through a partnership with the Pond Inlet archives, so that even those without access to a computer will be able to see it.

“We’re excited to share that with the community, just as a way to tell science stories in an accessible way,” Herodier said.

The five-minute film is captivating, in part because of the movement of sun and clouds and how the camera captures the changing weather.

Blizzards descend quickly; morning fog smothers the ice like whipped cream; hills in the distance turn from white to dark blue; and eventually, the rocky hillside in front of the camera emerges from the snow.

Within the first minute, the floe edge crack is revealed and you can watch as it widens over time.

At several points, snow covers the camera lens and the image goes gray until it slowly melts away.

In fact, the lens got covered in snow mid-July but luckily, melted just a few hours before the long-awaited ice breakup event. And then suddenly, within a few frames, the sound turns to open blue water.

Debicki, with partners from the Université du Québec à Rimouski as well as local colleagues including Alex Ootoowak, were back in Eclipse Sound recently to reinstall the time lapse cameras and again capture the spring sea ice breakup this year.

In an effort to offer a meaningful service to the local community, they have mounted a camera on Mount Herodier, about 30 kms east of Pond Inlet, facing northeast, across the sound.

That camera will send a photograph to a website every 20 minutes, using the local cell phone network, to show real-time ice and weather conditions year-round.

Anyone with an internet connection can go here to see the latest photograph.

When cell phone usage is at its peak during the day, there might be a time lag for photo upload, said Debicki, but outside of those peak hours, image uploading will be more regular.

“What I really love about this project is that there’s real academic interest and the Université du Québec à Rimouski in studying the ice stability in Eclipse Sound,” Debicki said.

“But there’s also a tremendous community interest, both in the images we’ve collected, and the breakup as it unfolds, but also, we anticipate, the up-to-date information from Mt. Herodier. We’re really excited that community members are going to see this.” 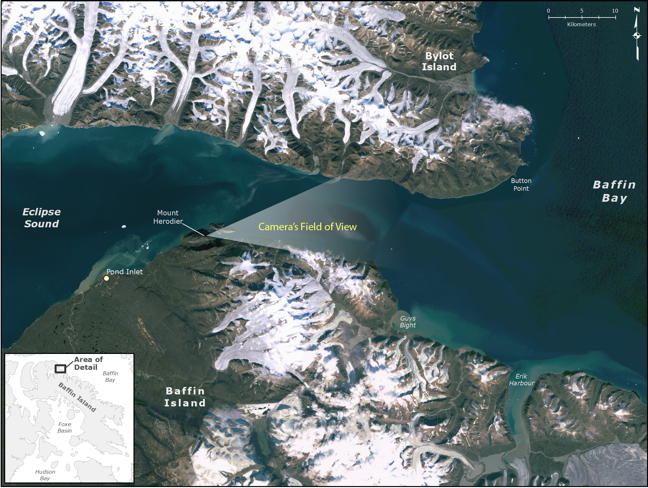 A map showing Eclipse Sound and the location of the camera at Mt. Herodier. Other cameras, at Guys Bight, to the right of Mt. Herodier, have also been installed to capture the spring sea ice break up as they did last year.