Alex “Puasi” Ippaq wears a traditional eiderdown parka during filming of People of a Feather. The outer layer is made from Arctic eider duck skin with the feathers still attached for wind and water resistance. (PHOTO BY JOEL HEATH) 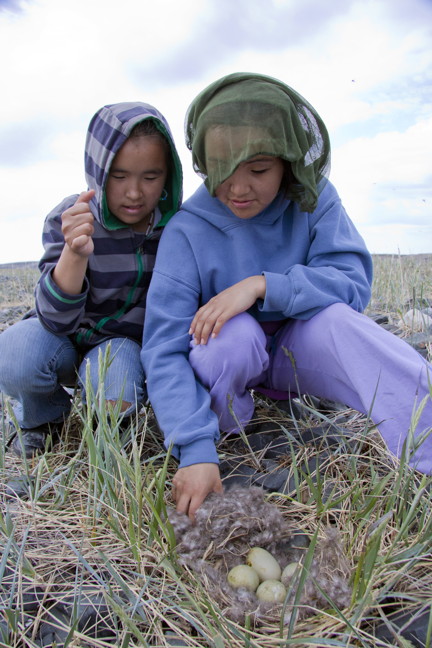 Sanikiluaq youth Dora and Rebecca Kavik collect down from an eider nest during filming of People of a Feather. (PHOTO BY JOEL HEATH) 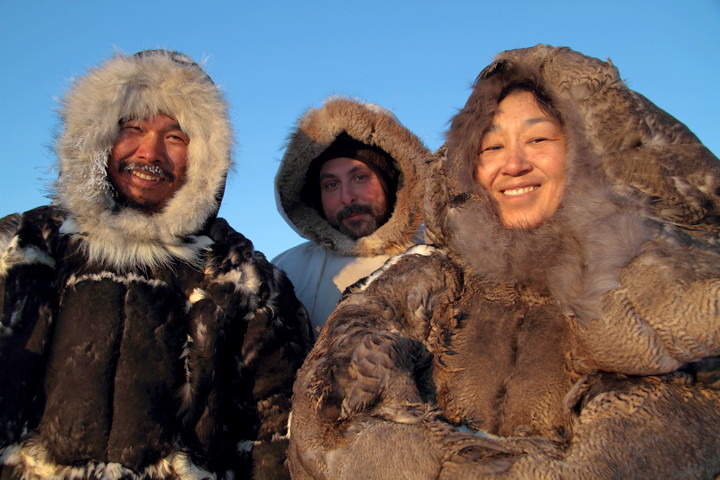 From the time he was an infant in his mother’s amauti to age 22, which is what he is now, Alex “Puasi” Ippaq has been going out on the land every summer.

From his home in Sanikiluaq in southern Hudson Bay, his family — grandparents, parents, brothers and sisters — would set off to various destinations on the Belcher, Sleeper and King George islands to camp, hunt and fish.

When he was old enough, he would help collect the down that mother eiders pluck from their skin to line their nests.

Ippaq and his family members would only take a portion of the fluffy eider, he said recently on the phone from Sanikiluaq, so as not to jeopardize the baby ducks.

And anyway, biologists who study eiders say the mothers pluck more if they think there’s not enough insulation.

It’s that insulating factor — some claim it’s the warmest material on the planet — that makes eiderdown desirable and expensive.

A little more than a decade ago, the people of Sanikiluaq got some government money and started making eider down parkas for local sale, but the venture petered out after a few years for a variety of reasons.

Now, with some new modern equipment, money from three levels of government, and local people committed to making it work, the community of Sanikiluaq is reviving its commercial down production.

“We were originally planning to have it as a one-year pilot but by the looks of things, we’re going to be operating for years to come,” said Brandon Clark, Sanikiluaq’s economic development officer.

Which is good, he added, because there aren’t many opportunities for local people to find jobs and make money.

The Down Association of Canada, which goes by the name Downmark, says eiderdown is the best of all goose and duck downs because it is the fluffiest and because it clings to itself.

Once stuffed inside a coat or blanket, the down traps body heat and provides a barrier to cold, offering one of the best known insulating materials, natural or synthetic, known to humankind.

For generations, Inuit from southeastern Hudson Bay have been eating eider ducks, collecting the down and making parkas with it. Traditionally, they used the actual duck skin as the parka’s outer layer, with wind and water resistant feathers attached.

That practice was captured in the award-winning and much-lauded documentary People of a Feather, directed by biologist Joel Heath and released in 2012.

Heath is also president of the Arctic Eider Society, a charitable organization that works with Inuit and Cree in East Hudson Bay to marry traditional knowledge and scientific research to address issues of local concern including environmental change and the impacts of development.

People of a Feather helped draw the attention of southern audiences to an ancient and sustainable harvest and to the eiderdown product itself.

“I think it’s great. More jobs that are available that are linked to their culture and use their traditional skills, the better,” said Heath.

“Obviously our reason for making the film had nothing to do with marketing the eiderdown industry but it’s a good economic development spin-off that came out of the film.”

Early in March, the federal, territorial and hamlet governments issued a joint news release saying Sanikiluaq would get more than $175,000 to re-start eider product development: $107,394 from the Government of Nunavut economic development, $39,511 from the hamlet and $28,952 from the Canadian Northern Economic Development Agency.

That money, said Clark, will go toward paying harvesters for the down, upgrading processing equipment and paying local seamstresses to design and make parkas, vests and duvets.

So far, the project has been run out of the hamlet office but soon it will be transferred to the newly-created Sanikiluaq Development Corp.

Clark said the eider operation that ran from 2000 to 2003 concentrated on local sales and relied on government money. “Now we’re looking to sell finished products outside the community in a high-end market,” he said.

Sanikiluaq’s senior administrative officer has already been courting southern buyers and marketing the products, Clark said. They suspect parkas would sell in southern boutiques for between $1,500 and $2,500.

But before they can officially launch the project this summer, they need a Canadian Wildlife Service permit and approval from the Nunavut Impact Review Board. Both of those processes are currently underway.

Clark said local organizers have been working with the hunters and trappers association to identify popular nesting sites and sustainable collection practices.

Heath said wildlife specialists from Environment Canada are hoping to travel to the Belcher Islands in summer 2016 to survey the population and asses its health with baseline data.

“If people were going back and visiting the same nests over and over again, that would be a problem,” Heath said. “But people are conscientious about that so I don’t think that will be an issue. They realize it’s important to be sustainable.”

Clark is confident the project will go ahead so organizers have already spent about $30,000 on new equipment including a dryer, two cleaners which tumble the down to filter out debris and an oven which sterilizes the down for commercial use.

They are hoping to pay harvesters between $100 and $150 per kilogram of down.

It takes about one kilogram to make a queen-sized duvet. The same amount would be enough for two women’s parkas.

Clark said he’s expecting to purchase about 300 kgs of down this summer — and much of that is likely already in town.

Because people traditionally collect down when they’re out hunting and camping, there are stockpiles of the fluffy stuff packed into garbage bags in many Sanikiluaq homes.

Arctic eider ducks are unique in several ways. For one thing, they’re bigger. Eiders can reach three kilograms in size, compared to the average mallard which weighs one third to one half that.

While they do travel around in winter in search of open water, their movement is currently not considered by wildlife biologists to be full migration. But that could change.

As Heath so vividly showed in his film, the more frequent releases of freshwater into James Bay from massive hydroelectric dams controlled by Hydro Quebec can cause entrapments, change currents and cause quicker freeze-up, preventing the eiders from accessing marine shellfish, their main source of food.

It’s possible — though at this point, it’s speculation, Heath says — that Arctic eiders may one day migrate in winter to find food or else suffer population decline.

So the Arctic Eider Society, in conjunction with Environment Canada scientists and local people, will continue to monitor the population as best they can, he said.