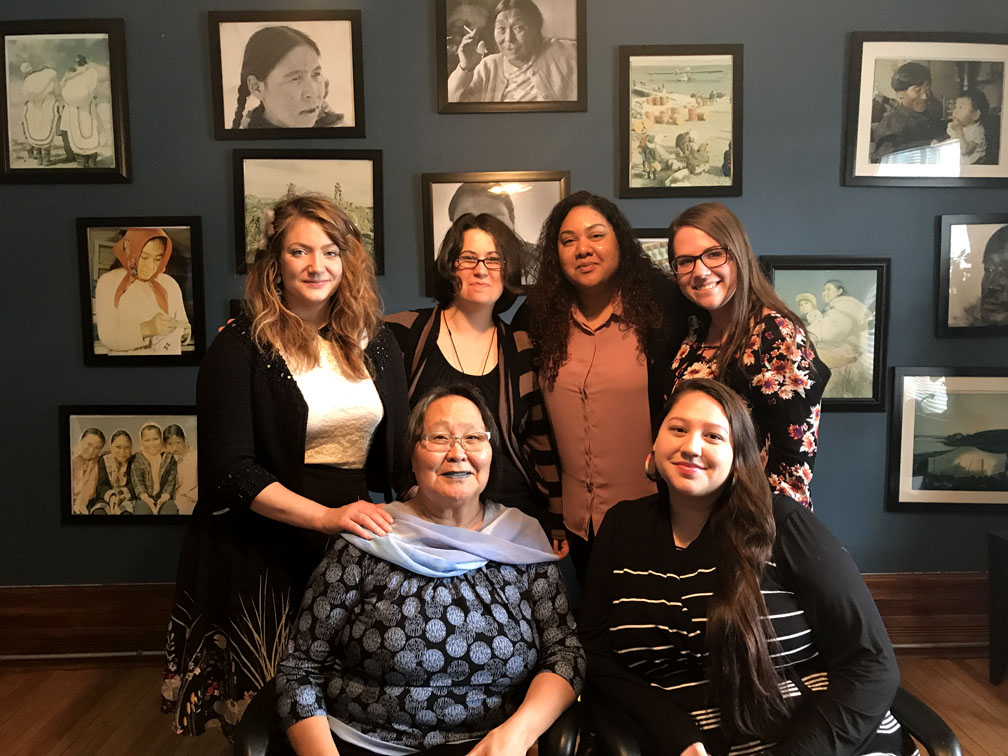 OTTAWA—An Inuk woman, new to Ottawa with few connections, ended up in the sex trade while looking for a new home.

A friend suggested she move in with another friend, a man.

He quickly turned out to be aggressive and controlling. He took her personal documents and coerced her into sex work and debt bondage.

Her experience of being trafficked led her to engage in sex work afterward.

Another Inuk woman, with developmental disabilities, flew to Ottawa when a non-Inuk woman she had met up North offered to pay for her flight.

Counsellors and social workers eventually tracked her down and suspected that she was being held against her will and groomed for exploitation.

Each of these survivors of human trafficking are clients of Alluriarniq, a support service for women engaged in sex work, or who are looking to exit the sex trade.

Operated by Tungasuvvingat Inuit, the Ottawa-based organization for Ontario Inuit, the program gives them ongoing counselling, navigational support and cultural support, following the recovery of their belongings and their freedom.

For the last six months, the Alluriarniq program has offered one-on-one counselling, court support, help getting STD tests and birth control, as well as free condoms and other practical items for Inuit sex workers.

They also schedule activities to promote safe-sex practices and self-love, with the goal of supporting Inuit women who make a living through the sex trade.

Although the project began with the goal of focusing on exit strategies and supporting women to find new ways to make a living, it quickly became clear to Jennisha Wilson, manager of the Alluriarniq team, that sometimes sex work is the most lucrative choice or the best economic option for some women.

So TI shifted the program’s focus to encouraging sex workers to stay safe.

“A lot of the housing case managers realized that the people they were housing were also engaged in sex work, or survival sex,” Wilson said about the project’s origins.

It became clear that Inuit engaged in sex work needed a safe space to access resources and to look at all their options for harm-reduction-based support, or to find ways to exit the industry.

“If they choose after looking at the options that sex work is more lucrative for them, then we are just simply supporting them to stay safe, and have positive sexual and reproductive health,” Wilson said.

However, for those who are seriously considering leaving the sex trade but simply don’t know how, TI helps them with building self confidence and deciding what they want to become, and then tries to pair them up with other departments or partners to offer additional support.

“If they are only doing it as survival sex, that may not be as safe for folks or as realistic for their lived realities, and if we hope that they would get there then we have to meet them where they are,” Wilson said.

In an average month, TI’s mobile outreach team sees over 100 people, although not all of them are primary clients served on site.

The outreach van drives around the city for four hours on Mondays and Wednesdays, stopping at major shelters and the locations around Ottawa where they know Inuit often hang out.

The team provides a meal, bus tickets and promotes their programs, doing intakes if needed.

Aden Cosgrove, program counsellor at TI, says sex work among the Inuit community in Ottawa is far more prevalent than most people realize.

“People are often displaced from the North and they don’t have many opportunities for employment,” Cosgrove said.

“There are a lot of barriers. Sometimes people come here and they can’t find housing and they’re homeless, so they may have to engage, for example, in survival sex in order to stay housed.”

And since prostitution is highly stigmatised in the community, Wilson said, it is difficult for Inuit sex workers to talk about their work without being judged.

So when TI has visitors for drop-ins, staff will offer a tour of the facilities and explain all of the services they provide so that they might feel more comfortable self-identifying and sharing their specific needs.

“Everyone that started with us in month one is still with us in month six, just because it takes a very long time to unlearn behaviours and to build confidence, to see the other options for yourself,” Wilson said.

The outreach van gets a lot of praise from the community.

“There are other programs that support sex workers and individuals that are being trafficked, but they are more First Nations-based,” Wilson said.

“To have a space for Inuit sex workers is really big for them,” said Helen Roos, president of the Iqaluit-based Ilinniapaa Campus, who also worked on a 2014 report on human trafficking in the Inuit community.

“Having Alluriarniq for Inuktitut language, access to TI’s range of mental wellness supports, and programs from an Inuit cultural lens to the issue, is so very important,” Roos said.

“Connecting safely and discretely with services, including country food and those nurturing elements of identity, really do make a big difference for those caught in a web of exploitation.”

It was not too long ago that a young Inuk woman was found in Vancouver at a shelter, without access to any cultural programs or services.

She was subsumed within the dominant First Nations cultural programming of sweetgrass, dream-catcher crafting and moccasin making that was available in that region and through that organizations’ programming links, Roos said.

TI’s Alluriarniq program is also aimed at increasing the conversation about sex in the community, so they schedule regular games like Sexy Jeopardy, self-care days with spa facials, and self-love workshops to talk about what it means to be in a healthy relationship and how to be independent, all done in a culturally-focused way.

“If we have these conversations about sex, positive sexuality, relationships and consent, and we can normalize them, then we will be able to have more people come forward about being sex workers and support them in a really positive and non-judgmental way,” Wilson said.