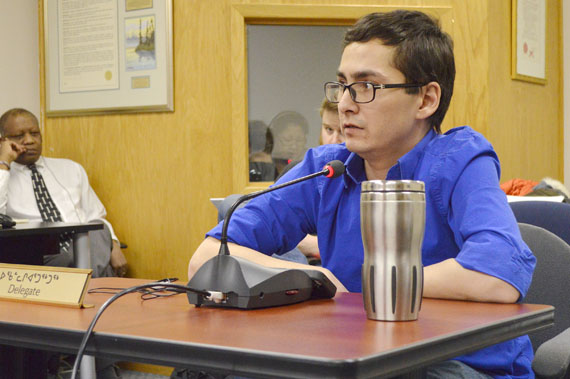 Travis Cooper, the president of the Toonik Tyme Society, Feb. 9 at an Iqaluit City Council meeting. (PHOTO BY STEVE DUCHARME)

This year’s 51st annual Toonik Tyme, held in Iqaluit each April, is shaping up to be a dismal successor to its acclaimed 2015 half-century celebration, Iqaluit city councilors heard Feb. 9.

Toonik Tyme Society President Travis Cooper, appearing as a delegate, told city councillors that his organization, which is suffering from staff shortages and a shrinking volunteer list, has forced him into a difficult decision.

“We come to you this evening seeking your approval for a transition plan. What we suggest is a return of the Toonik Tyme Society and festival to the city,” Cooper said.

The past few years, he admitted, have been difficult for the independently-run society.

“At this time, we have a number of difficulties, those being maintaining a full roster of board members, keeping board members from year to year, and attracting and retaining new board members,” he said.

The society will cut back on the festival’s events for 2016, citing overworked volunteers and organizers, said Cooper.

“The opening and closing events will be scaled back — and that is partially due to the unfortunate circumstances with everybody else being members in other societies and being busy within the community at the same time,” he said.

Cooper told city councillors a number of events will also be “streamlined.”

“I do have a large portion of the 51st festival completed already. We do have our acts coming, and we do have a lot of organization already done,” he continued, saying for this year, at least, the city isn’t expected to do much more than it already does.

“The amount of work that we will require from the city is about the same as every other year, but this is a period in time where we need the city to go ahead and take over again.”

In its current form, Cooper believes the Toonik Tyme Society can only continue with a large influx of new, committed volunteers.

The festival’s existing volunteer base is crumbling under the workload, he admitted.

“People do burn out, and that’s essentially what’s happening.”

And, despite being an Inuit-themed festival, Cooper said only two Inuit currently serve on the board, including him.

“In my first two years there was one. I was the only one. It’s unfathomable that we’ve reached this point,” he said.

Coun. Kuthula Matshazi asked Cooper to be more specific in the aid he wants from the city.

“There’s two options, either I can get more city councilors on the board as we’ve been requesting for the past two years, or the city can take over,” Cooper said in reply.

With an annual budget of around $90,000, Cooper said money isn’t the determining factor in the festival’s success.

Council deferred the matter to the city’s recreation committee.

Deputy Mayor Romeyn Stevenson agreed with council’s deferral, but said the added delay might leave the 2016 festival high and dry.

“Maybe we need to help the Toonik Tyme association now, and then certainly I believe it should come back to the [City of] Iqaluit fold at some point soon,” said Stevenson.

“The struggles that they have, it seems obvious it’s not sustainable. We should be able to make it sustainable.”

Cooper assured city councilors that, whatever the outcome, he will work for a smooth transition.

“The festival is still going to go ahead and stay, whether it’s with a new board or the city. I’ve committed myself to ensuring that there is proper protocols in place to ensure the continuance of the society and the festival itself,” he said.