Tourism in Nunavut enjoys rise in 2012 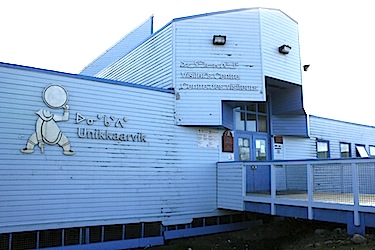 The Visitors Centre in Iqaluit, a branch of Nunavut Tourism, offers a variety of pamphlets and information guides to the city and the territory. (PHOTO BY DAVID MURPHY)

Sanjay Uppal, operations manager of the Capital Suites chain, which manages the Hotel Arctic and Navigator Inn, is responsible for five hotels in the North.

And business at these hotels has never been better: compared to last year, he’s seen double the number of pure tourists.

In his opinion, this is the result of the attention the Arctic has received through the media.

“I think that it’s about time really. People decide to come up here as tourists with all the attention in the media with polar bears and melting ice and the seal skin ban — you name it, all the focus is on the Arctic,” Uppal said.

“It’s the time to get people up here. The fad next year might be deserts, or the rainforest in Brazil. It’s critical that companies take advantage,” Uppal said.

The Hotel Arctic is trying to make the most of the current influx by teaming up with Arctic Kingdom Polar Expeditions Inc.

Graham Dickson, the president of the company, rents space in the hotel so visitors don’t have to go far to set up a trip.

“We’ve seen a growing interest in tourism and the whole travel industry,” said Dickson, who has been running Arctic Kingdom since Nunavut’s creation in 1999.

The key to growth in the tourism industry is to work closely with local businesses, he said.

“Everyone [needs to be] working together as an industry to build a capacity for tourism, as opposed to everybody running independent sole proprietorships like small businesses.

“We’ve been active working with local communities, local outfitters, but also internationally with tourism operators from around the world, as well as travel consortiums,” Dickson said.

But there are challenges with the tourism industry that need to be addressed, Dickson said, noting that “it would be unfair to paint it as a purely rosy picture. The challenge and opportunity is to build capacity, and that has to do with being able to accept and handle large volumes of travellers, ideally at more competitive prices.”

And in this, what’s critical is industry development, he said.

“Not just to create new businesses, but to better support those that are active,” Dickson said. “I think there could a lot more support from the development of the industry rather than the promotion of the industry.”

If Nunavut could establish more tourism infrastructure around the tourism industry, the future might be bright for all of Nunavut, he said.

“If there were a greater volume of travellers, that would help lower the cost of airfare for Nunavummiut,” said Dickson. “Greater volume means lower prices, which means more competition — which is a good thing.”

The survey reveals that the average visitor spend about $4,558 in the Baffin region, $4,475 in the Kitikmeot region and $3,532 in the Kivalliq region.

Older Canadians looking to spend money, extreme world travellers, and those seeking a chance to visit the North before it disappears make for a perfect storm of tourism, says Colleen Dupuis, chief executive officer of Nunavut Tourism.

“There is a whole bunch of factors coming together, which for us is great because they’re all hitting at the same time, so it means we see an increase,” she said.