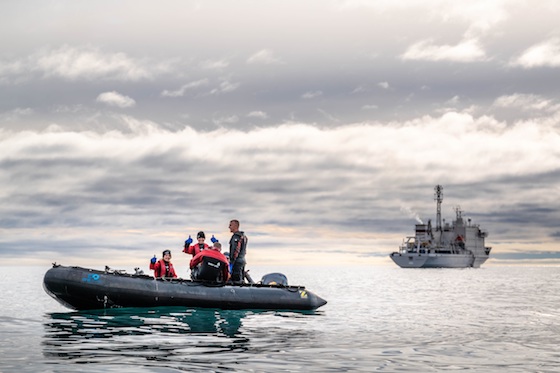 Earlier this month a team of divers from the Ocean Wise organization used the Akademik Ioffe, which lies in the distance in this photo. All passengers who were aboard the vessel when it ran aground last Friday have been flown home. The Canadian Coast Guard and Transport Canada are to develop a plan for moving the vessel, still anchored in the Gulf of Boothia, to another location. (PHOTO COURTESY OF ONE OCEAN EXPEDITIONS)

The Canadian Coast Guard and Transport Canada have taken control of the damaged adventure cruise ship Akademik Ioffe and are preparing to develop a plan tomorrow for moving the vessel to another location.

“Coast Guard will work with Transport Canada, and board the Akademik Ioffe this Wednesday [Aug. 28], to complete all required inspections and develop a plan to get the ship to its next destination safely,” a Coast Guard spokesperson told Nunatsiaq News in an email response to questions late yesterday.

Transport Canada employees en route to the vessel include two inspectors from the Transportation Safety Board, who are to determine what level of investigation the agency will conduct.

The Akademik Ioffe, which was carrying about 160 passengers and crew members on an Arctic cruise package organized by One Ocean Expeditions of Squamish, B.C., ran aground in the Gulf of Boothia this past Friday, Aug. 24, about 80 kilometres northwest of Kugaaruk.

One passenger, Donglai Gong of the Virginia Institute of Marine Science, who was aboard the vessel to conduct research, said on Twitter that he heard a “loud grinding sound” when the ship became grounded.

“The ship came to a complete stop and it fell silent, and listing to one side,” he said.

It appears as if the vessel’s hull was likely damaged and that it began to take on water.

But the Coast Guard says now the situation has stabilized.

“The Akademik Ioffe is anchored and the situation is currently stable. There is no new water ingress and no pollution has been observed,” the Coast Guard spokesperson told Nunatsiaq News.

Meanwhile, the company that sold the package tour, One Ocean Expeditions, said in a statement issued late on Aug. 27 that they will make no further public comment on the incident after today.

All passengers were transferred to the damaged vessel’s sister ship, the Akademik Sergey Vavilov, which took them to Kugaaruk, One Ocean said earlier.

From there, the company flew the passengers through Yellowknife to Edmonton, from where they travelled on to their home destinations.

The @VIMS_News science team @truedichotomy and @SaltyBienlien are finally flying home today after the unexpected early ending of the #NWPproject this field season. We are sleep deprived but in good spirit. Thank you @innerspacectr for taking care of us every step of the way.

But the company has not yet answered a question from Nunatsiaq News that asked if the company would refund passengers and academic institutions whose trips, some of which involved complex research projects, were disrupted.

They did say they “thank passengers impacted by this incident for their patience and understanding” and that they will contact them individually in the coming days.

Those passengers include a group of 36 people from the University of Rhode Island, which included 16 undergraduate students, four graduate students, post-doctoral candidates from around Canada and the United States, and a professional film crew, the university said Monday in a statement.

Their three-week URI “expedition,” called the “Northwest Passage Project,” departed Resolute Bay on Aug. 23 and was to have sailed through Bellot Strait through to Cambridge Bay, then back through Lancaster Sound, where it was to end in Iqaluit on Sept. 13, the university said.

That $3.1 million project, which began in 2016, was funded by the National Science Foundation and emphasized public education and daily webcasts.

It’s not clear why the Akademik Ioffe sailed far to the south of Bellot Strait close to Kugaaruk, a route that offers no access through the Northwest Passage.

One Ocean Expeditions did not answer a question from Nunatsiaq News that asked them to explain the vessel’s route.

One Ocean does not own the Akademik Ioffe. Its business is concerned with marketing, selling and handling logistics for numerous package tours in the Arctic, the Antarctic and other coastal regions.

The actual owner of the Akademik Ioffe is still listed as the Russian Academy of Science, based in an ocean research institute in Kaliningrad, Russia.

The vessel appears to have been managed in the past, through a contract, by a corporate entity called Fleetpro Management Services, headquartered in Basel, Switzerland, but it’s not clear who manages the vessel now.