Tundra roots, leaves and seeds on the menu 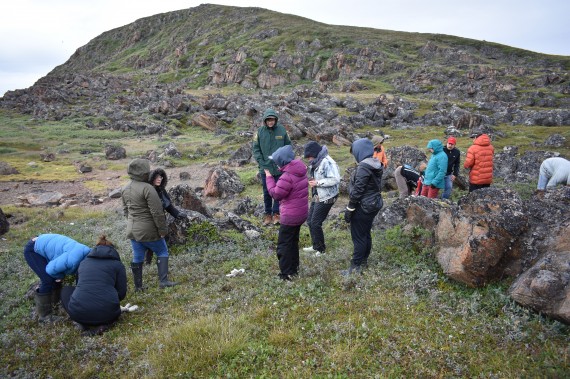 As part of the City of Iqaluit’s Learn To workshops, Leesee Papatsie, who works for Nunavut’s Department of Environment, guided a tundra tour about traditional plant uses. Nearly 20 people walked through Apex’s Rotary Park, digging up roots to eat, tasting leaves and chewing on fluffy white mushrooms. (PHOTO BY COURTNEY EDGAR) 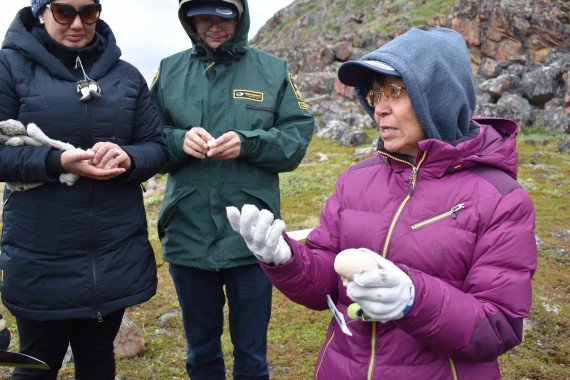 Leesee Papatsie explains the traditional Inuit uses of these white mushrooms that grow on the tundra. She says women would pop a mushroom to use as a moisturizer when they knew their husband was returning from a long hunting trip, to make their skin silky smooth. (PHOTO BY COURTNEY EDGAR)

Hungry on a hike but forgot your lunch? Snack on that pink dwarf fireweed that grows almost everywhere in Iqaluit. The leaves, flowers and roots can be eaten raw and taste a bit like spinach. If you boil the leaves for tea, it can even help with an upset stomach, according to Inuit tradition.

Going camping but don’t want to carry a mattress or tinder to light a campfire? No worries, pick enough heather and it can serve as both a makeshift mattress to rest your head at night and an excellent fuel source to feed fires.

These are some of the ways tundra plants have been used traditionally by Inuit and continue to be used, according to the City of Iqaluit’s Learn To workshop that was held on the afternoon of Wednesday, Aug. 22, at Apex’s Rotary Park.

Leesee Papatsie, who works for the government of Nunavut’s Environment Department, guided the tour of nearly 20 participants, showing off different plants and their uses at each step.

The Learn To workshop series runs each summer, every Tuesday, with a new topic each week. Last week, it took place on Wednesday due to poor weather.

Those who came out for the tour learned to identify different leafy plants, like mountain sorrel, which is a shrubby flowering plant that has leaves that look like basil. Sorrel leaves have a fruity citrus flavour, which explains its nickname “sweet leaves.”

Some participants stooped down to pick and eat berries, including tiny blueberries and cloudberries.

Under Papatsie’s guidance, they dug up yellow oxytrope flowers in order to snack on the root. It looks like a slender brown ginger. You peel off the dirt and outer skin, and the white inner flesh tastes like a mix of carrot and sweet potato. You can cook it like any other root vegetable or just eat it raw.

Jamessee Moulton, an environmental technologist for the GN who came out to participate and learn, was able to find some of the roots on his own.

Some in the group tried the alpine bistort, which grows a cluster of miniature flowers in the shape of a beaded necklace. The tiny seed-like bulbils are edible and, according to Papatsie, often used inside salads.

“They taste like almond and coconut,” one man on the tour said.

Not every plant on the tundra is edible, though. One to be avoided is mare’s tail. It looks like a thin reed that sticks out of pond water.

Papatsie also said that although Labrador tea has some traditionally medicinal purposes, it should not be boiled and will make people sick and hallucinate if not dosed correctly. She suggests just dipping it in water for flavour.

Labrador tea is also used as a mosquito repellent, Papatsie says. The leaves smell like citronella, another natural repellent.

The group learned other plant trivia besides which ones you can have for lunch.

For instance, Arctic cotton is used to make wicks for qulliqs.

Inuit women used to use a certain type of mushroom as a moisturizer, Papatsie says, to make their skin silky smooth. When you pop it the spores ooze out and leaves skin soft.

“It is a bit smelly though,” Papatsie said. “So you have to wash it off with a bit of water.”

There is a certain moss that was popular to use as a diaper or menstrual pad on the land.

Those who came out also learned that you can tell the seasons through tundra plants.

Papatsie told the group that mountain aven flowers can tell you when seasons are changing. In the summer, they look like white buttercups with a big yellow centre, but by the end of August the petals turn fluffy and swirl up into a spiral.

“Once they’re letting go of their seeds… Inuit back then knew that winter is coming,” Papatsie said.

Those in attendance for the plant tour found the workshop informative and delicious.

“I had no idea there were so many great tasting roots under the tundra,” Moulton said.