Turn it up! Nunavut’s premiere music and arts festival set to begin

Outdoor shows, new mobile app and a Greenlandic play all on deck 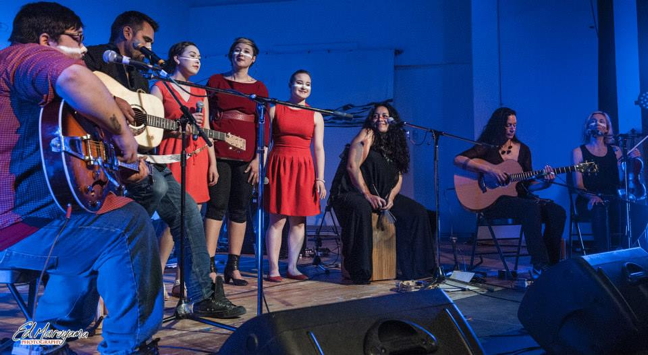 In a few short days, venues around Iqaluit will don the trademark yellow and purple banners that can signify only one thing — it’s time for Nunavut’s largest music festival to unfold in Nunavut’s capital.

This year the Alianait Arts Festival promises to deliver a steady stream of artists from across the circumpolar world, southern Canada, and even from the faraway British Isles, Mongolia and Germany.

Both free and ticketed events will be held across Iqaluit on the Canada Day long weekend, from June 29 to July 3.

Founded in 2004, this year marks the twelfth anniversary for the annual summertime festival and director Heather Daley says the 2016 installment will offer plenty of reasons to leave the house this year.

Most notably is the festival’s first foray into the mobile app world, delivering a sleek new program for festival-goers to explore concert line-ups and artist biographies, stream music and videos, and receive live updates.

“It’s got all the information of artists and their photos, links to the shows. You find out when it is, where it is and you can buy a ticket right there [on your phone]. We’re really excited about it,” Daley said.

As for this year’s programming, Daley says there’s plenty to choose from.

The festival will have its first outdoor evening show in six years July 1, when artists Beebs & the Pride Punks, Christian Tagoona, The Bushman NT and Uyarakq & Peand-el perform at the festival’s big-top tent as part of a “School’s Out” concert for Iqaluit students.

The next day, the National Theatre of Greenland will give two performances of its play “Minik” July 2 on Nakasuk School’s gymnasium stage.

The play is a modern retelling of Minik’s tragic history: when he and his Thule family were brought to New York in 1897, under the custody of the American Museum of Natural History, to be studied.

The plot “discusses identity and interaction between cultures,” according to the play’s description.

The stage at Nakasuk School will undergo extensive retooling for the play, and will mark the first time a Greenland theatre troupe has performed at the festival.

“We’re presenting it in a space that’s very different from what they’re used to,” Daley explained, adding the National Theatre of Greenland’s technical director will also be making the trip to Iqaluit to coordinate the show.

And that’s not the only event that will feature expended production: Daley says Alianait will implement new lighting and sound equipment for this years events, some of which was showcased at it’s free show June 21 commemorating National Aboriginal Day.

“It just keeps getting better. We have a great team,” Daley said.

Undecided on what might strike your fancy? Here are some performances you might want to check out:

• Greenland pop-rock and folk artist Simon Lynge will kick off this year’s festivities June 29 at Nakasuk School, along with Pangnirtung’s Mary & Joey and Vancouver-based blues guitar and harmonica duo The Harpoonist & The Axe Murderer;

• critically-acclaimed documentary “Two Soft Things, Two Hard Things,” exploring the LGBT community in Nunavut, will have a special screening alongside Sedna-myth short “Lancaster Sound” at the Astro Theatre July 1 at 5:30 p.m.; and,

• Vancouver pop-artist JP Maurice, who delivered a powerful striped-down show in Iqaluit Jan 8, will return to the stage with cousin Jeff Maurice and Iqaluit-staple, The Tradeoffs, for a special one-off show closing out the festival July 3.

The festival will also screen a special tribute video for renowned and beloved singer-songwriter Etulu Aningmiuq, one of Nunavut’s most prolific musicians since the 1980s, who passed away in February.

Alianait’s new festival mobile-app can be downloaded for free on Apple’s App Store or on Google Play for Andriod devices.

For more information on the festival’s lineup, or to sign up as a volunteer, visit Alianait’s website here.