Men were surveying ice outside of Resolute Bay 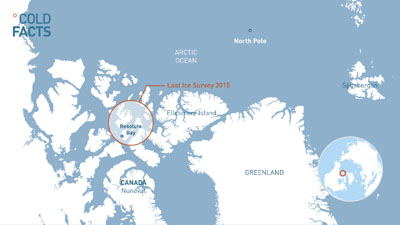 Two Dutch researchers skiing through a region outside of Resolute Bay, referred to as the Last Ice Area, are presumed to have drowned after falling through broken ice. (PHOTO COURTESY OF COLD FACTS)

Two Dutch researchers are presumed drowned in a region outside of Resolute Bay where they were conducting research.

Polar travellers Marc Cornelissen and Philip de Roo from the Netherlands are reported to have left Resolute Bay April 6 as part of research into the “Last Ice Area,” the World Wildlife Fund’s conservation plan for the High Arctic region, where ice predicted to persist the longest in the face of climate change.

The distress call prompted an aerial search and rescue to the site, where a helicopter located the men’s equipment near an area of open water and poor ice conditions, the RCMP said.

A second aircraft search the same day spotted some of the men’s personal items floating in the water at the location of the distress signal.

Based on the search teams’ findings, the two men are presumed dead, RCMP said April 30, and the search has been called off.

Cornelissen and de Roo were surveying ice conditions for a project called Cold Facts based in the Netherlands.

The two men were expected to survey areas of mixed ice condition over a distance of 400 kilometres. They were reportedly travelling on skis and did not have a guide with them.