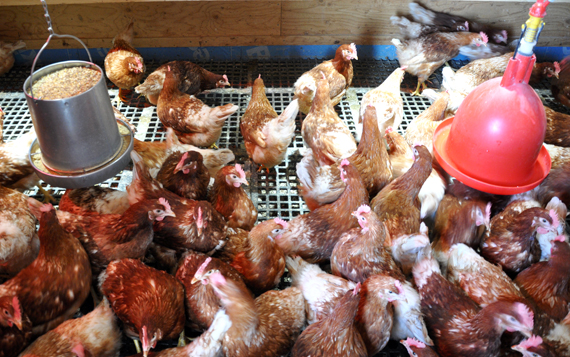 Hens crowd around the entrance to their enclosure in Kuujjuaq. The laying hens produce about 100 eggs a day, which are sold to the Nunavik community for $2 a dozen. (PHOTO BY SARAH ROGERS) 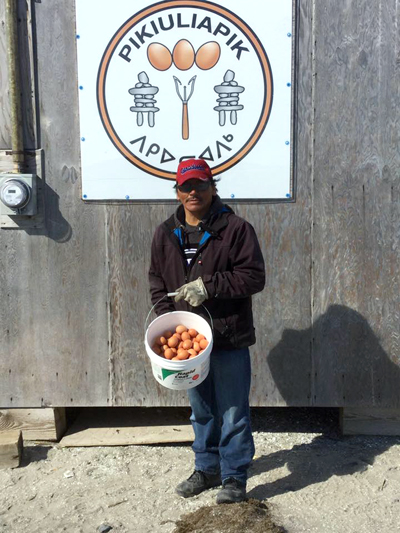 Samisa Qinuajuak, the hen farmer in Akulivik, holds up a bucket of freshly laid eggs. “People love the eggs,” he said. (PHOTO COURTESY OF S.QINUAJUAK) 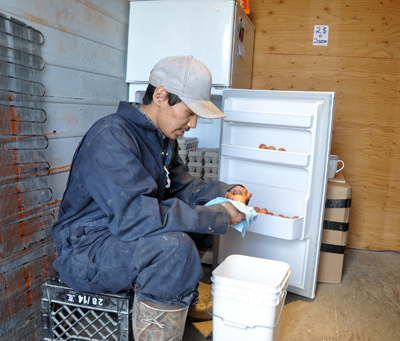 Sammy Tooma cleans eggs at Kuujjuaq’s hen house in May. The local Anguvigak hunters and trappers organization plans to build a larger facility to house the birds, which lay around 100 eggs each day. (PHOTO BY SARAH ROGERS)

KUUJJUAQ—It’s a warm, early summer day and the door to Kuujjuaq’s hen coop is propped open.

Inside, dozens of hens press in towards the entrance to their enclosure, perhaps hoping to get some of the occasional breeze that blows through the tiny building.

Sammy Tooma, the birds’ handler, is squatted next to the enclosure on a crate with a rag. He takes the eggs one by one, wipes them down and places them in a crate in the refrigerator.

Tooma works for Kuujjuaq’s Anguvigak hunters and trappers association, which has operated the hen house for two years.

The Kativik Regional Government helped launch the project as a way to deliver fresh and inexpensive food to the community.

Now Kuujjuamiut can come by any day of the week to purchase eggs for $2 a dozen—elders get them for free.

“People really seem to like the eggs,” Tooma said. “I would say Kuujjuamiut eat more eggs now, especially the elders.”

On days where the fridge gets too full, Tooma said he’ll make a quick announcement on the local FM radio for people to come pick some up—and they do.

All the birds are female; hens do not need a rooster to lay eggs, only to fertilize eggs to become chicks.

Tooma said he has to break up fights between the birds at times when a group of hens picks on one of their coop-mates.

This is Kuujjuaq’s second batch of birds, and Auguvigak is planning to build a new and larger location to house them this summer, Tooma said.

The idea has now caught on in a second Nunavik community, Akulivik, where the local Pikiuliapik hen house has been in operation since April.

“They’ve been laying eggs for about two months now,” said Leah Alasuak, who works for Akulivik’s landholding corporation which distributes the eggs to the community.

Akulivik has a larger flock—150 birds, which are laying up to 120 eggs every day.

From the hen house, the eggs go to the office of the Qekeirraq Landholding Corp. where community members can pick up a crate for free.

Alasuak said the local hunters and trappers association plans to start selling the eggs in the summertime.

But with access to either free or inexpensive hen eggs, it’s a type of food more Inuit are eating now, Alasuak said.

The hen house and egg sales are just one of a handful of food production projects that the KRG has studied in recent years as a way to bring down the cost of living in the region.

The KRG has also looked at building a local provincially-approved abattoir or slaughterhouse to butcher the birds, although the meat of laying hens wouldn’t be commercially viable at the end of their egg-laying lifespan.