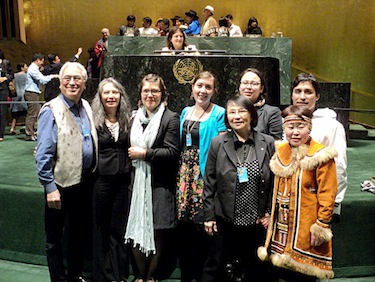 The Inuit Circumpolar Council delegation to the UN Forum on indigenous issues, shown here during an earlier Forum session, plans to present its 2011 declaration on gas and oil development in the Arctic on May 8. (FILE PHOTO) 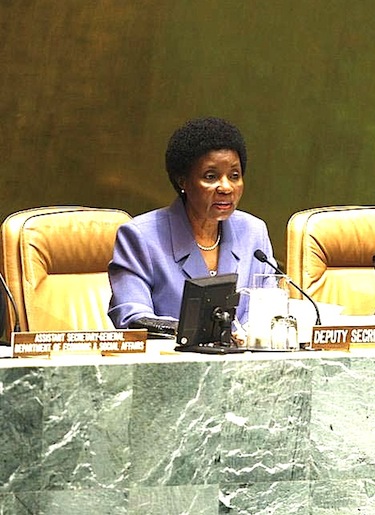 This week and next, 500 representatives from the 370-million indigenous peoples who live around the world are meeting in New York at the United Nations for the 11th session of the UN Permanent Forum on Indigenous Peoples.

The forum, which meets for 10 days each year, is a high-level advisory body that deals with indigenous issues related to economic and social development, culture, environment, education, health and human rights.

Five years after the UN Declaration on the Rights of Indigenous Peoples was adopted, a great deal remains to be done to realize the objectives contained in that landmark document, UN deputy Secretary-General Asha-Rose Migiro said May 7 at the opening of the 11th session of the forum.

Almost 2,000 indigenous participants from all regions of the world are taking part in the two-week session to advanced the rights and well-being of indigenous peoples.

Issues on the agenda include the rights of indigenous peoples to food security, the situation of indigenous peoples in places such as central and eastern Europe, the World Conference on Indigenous Peoples slated for 2014, and the special theme of “Doctrine of Discovery” – the way courts justified the annexing of indigenous lands – and the right to redress for past conquests, said a UN news release. And the Inuit Circumpolar Council plans to present its Circumpolar Inuit Declaration on Resource Development at the Forum on May 8.

“For 11 years, different voices and different languages have united in this Forum behind one, single demand: recognition and respect for the rights of indigenous peoples,” Migiro noted in her opening address. “Together, we have worked to define priorities and programs for sustainable and culturally appropriate development. We agree that there can be no development for indigenous peoples without the involvement of indigenous peoples in every step, and only with their free, prior and informed consent.”

These are fundamental principles enshrined in the Declaration on the Rights of Indigenous Peoples, you don’t need to need not look far to find indigenous peoples facing discrimination, persecution, displacement – even extinction, Migiro said.

“There are indigenous communities that lack clean drinking water, whose children go hungry, whose women suffer gross abuses and never see the perpetrators brought to justice,” she said. “A great deal remains to be done to see the objectives of the UN Declaration become a reality.”

Adopted by the General Assembly in September 2007 after more than 20 years debate, the Declaration on the Rights of Indigenous Peoples is a non-binding text that sets out the individual and collective rights of indigenous peoples, as well as their rights to culture, identity, language, employment, health, education and other issues.

A May 17 event will mark the fifth anniversary of the adoption of the declaration.

The theme of this year’s session, the “Doctrine of Discovery,” highlights the roots of many of the violations of indigenous peoples’ collective and individual rights, Migiro said.

“We must acknowledge what has happened and recognize past abuses. We must remember in order to learn, understand and do better,” she said. “These are the foundations that will allow us to build a future based on mutual respect, equity and justice.”

The chairperson of the Permanent Forum, Grand Chief Edward John, discussed the doctrine of discovery as he recalled his experiences at an Indian residential school in Canada.

“Those schools were premised on this idea that indigenous peoples were inferior to the general population; their cultures and civilizations were inferior; their languages were not to be spoken; children had to be taken from their families and communities and placed in these institutions to begin the gradual civilization and ‘Christianization’ of our peoples, as if our history and our culture and our languages were not important,” he said.

Established by the UN Economic and Social Council in 2000, the Forum is comprised of 16 independent experts who provide advice and recommendations on indigenous issues to the UN system.

The current session ends May 17.