Union cranks up the heat in contract talks with Iqaluit 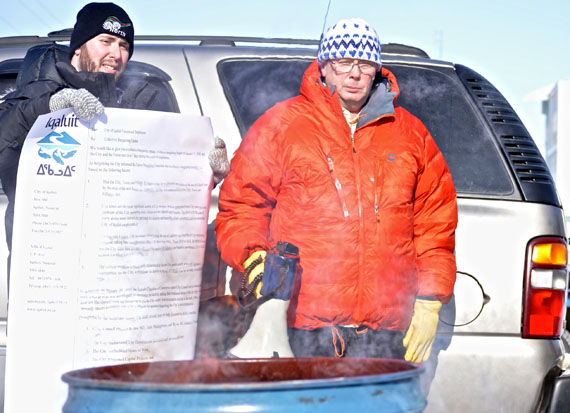 Bill Fennell, the president of the Nunavut Employees Union (right), and another member of the Public Service Alliance of Canada burn a giant copy of the letter that the City of Iqaluit attached to employee pay stubs this week. (PHOTO BY STEVE DUCHARME)

If you want to know how city workers feel about their recent wage freeze notification letter from the City of Iqaluit, look no further than the bottom of a smouldering fuel drum outside city hall.

About 50 city employees took turns throwing copies of the city letter — attached to their most recent pay stubs — into the flames March 30, demonstrating a united front against city efforts to curb costs and reduce its deficit at the expense of its workers.

“We’re not impressed with our employer’s intimidation and we’re not going to take it,” Bill Fennell, president of the Nunavut Employees Union, said through a bullhorn to the cheering crowd.

City workers are represented by Local 6 of the NEU, a component of the Public Service Alliance of Canada.

In its letter, the city announced a proposal to freeze unionized staff wages, along with reducing benefits and other incentives, for the next two years as administration tightens its belt under a crippling deficit.

Under Nunavut’s Cities, Towns and Villages Act, the city is prohibited from carrying a deficit from one year to the next.

“…continual abuse of the Act may open the door for the Government of Nunavut to put the City under Administration similar to the early 1990’s,” the letter warned.

“[They’re] using that as a hammer to beat down the members and it’s not acceptable,” Fennell told Nunatsiaq News.

But workers attending the rally say they work hard for their money and deserve more respect from their employer.

“I definitely disagree with the city and what they’re trying to do to us,” said long-time Nunavut resident and city employee Jeff Hopkins.

“If it wasn’t for us public workers, the city would be in a public emergency.”

In 2001, failed wage talks between the city and its workers resulted in a 91-day lockout and strike that suffocated Iqaluit under heaps of rotting garbage.

“I’m a little worried… do I have a job or do I not have a job? I’m the only income [in the household] so it’s stressful,” Hopkins said.

Denise Hutchings, a senior finance officer with the city for 24 years, was recently laid off and stood alongside Fennell during the rally.

“In a month, they’re going to have to recall her because another employee from finance is leaving. It’s just nothing but more bullying and we’re not going to take it… We’re going to fight,” Fennell said of Hutchings’ layoff.

“We believe in part the reason they singled her out is because she filed a harassment complaint against a city manager. So what do they do? They turn around and get rid of the person filing the complaint,” Fennell said.

The crowd responded by chanting “shame on the city,” as workers threw more city letters in to the fire.

The union is currently in the midst of negotiating a new collective bargaining agreement with the city.

“In January, they presented a package of major concessions [to workers],” Fennell said, on the first round of negotiations.

Union and city representatives plan to go back to the bargaining table March 30, hours after the rally.

“Truthfully we’re not hopeful, given the letter they just delivered,” Fennell said, about his expectations for the meeting.

Fennell would not comment when asked what the union is demanding at the bargaining table.

But the distance between the two parties, he said, is unprecedented.

The union is not ruling out the necessity for dramatic action, either from the city or the union.

“I don’t think a strike is inevitable, ever. I think it’s more likely this employer will lock out their employees, as they did in [2001],” Fennell said.

“But we’re remaining positive and trying to get a deal. At the same time we’re preparing our members, doing education courses, so that they are prepared… if it comes to a lock-out.”

“If it becomes obvious that nothing is going to move then, they’ll ask for a conciliator, which the federal government provides.”

After March 30, the next round of talks between the union and the city is scheduled for May.