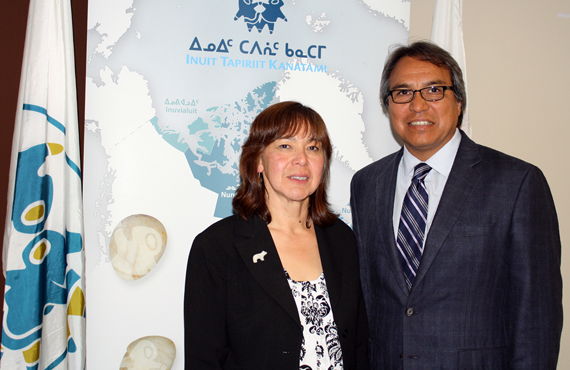 Nunatsiavut president Sarah Leo, left, led an Inuit delegation that recently met with James Anaya, right, the UN’s special rapporteur on the rights of indigenous peoples, who is touring Canada this week. (PHOTO COURTESY OF ITK)

The United Nations Special Rapporteur on the Rights of Indigenous Peoples is visiting Canada this week to look at the human rights issues of Aboriginal peoples.

And Inuit groups want him to take note of one of the biggest challenges facing their communities — access to housing.

James Anaya, who teaches human rights law at the University of Arizona, began a fact-finding mission over the weekend that will take him across the country.

Although Anaya’s tour won’t take him to the any northern territories, he met with an Inuit delegation representing the board of directors of Inuit Tapiriit Kanatami and the Inuit Circumpolar Council Canada Oct. 7.

“There are many pressing issues we could have brought to the attention of the UN Rapporteur, but housing is an issue that cuts across an incredible array of social policy areas,” said Nunatsiavut president Sarah Leo, who led the Inuit delegation, “from the spread of communicable disease to physical abuse to school attendance to the ability of individuals to participate in the developing economy.”

“Critically, for Nunavik and Nunatsiavut, it is also a land claims implementation issue.”

In a letter addressed to the UN rapporteur, ITK and ICC said about 33 per cent of Inuit live in crowded conditions, compared to just three per cent of Canada’s total population.

“This chronic housing (shortage) has a severe impact on the improvement of our economic and social conditions through the Inuit Nunangat,” the letter reads.

“Beyond these effects on the physical health of Inuit, there is significant anecdotal and some systematic evidence showing that a lack of adequate housing has deleterious effects on mental wellness.”

Inuit groups continue to work with the Canadian government to elevate the standards of living in their communities “with limited success,” the letter continues.

• acknowledge it has the constitutional powers to solve housing shortages, which are not limited by provincial jurisdiction in the area of housing;

• work with Inuit to create a National Inuit Housing Program.

Anaya is on tour throughout Canada until Oct. 15. The nine-day tour will take him to Ontario, Quebec, Manitoba, Saskatchewan, Alberta and British Columbia.

Anaya’s findings will be reflected in a preliminary report, submitted to Canada for consideration and then presented to the UN Human Rights Council.

The Special Rapporteur invites indigenous peoples and organizations to send information to indigenous@ohchr.org.