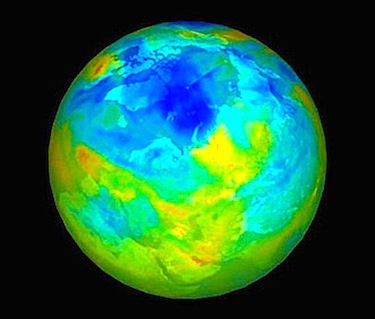 This image shows how large the Arctic ozone hole, shown here in blue, was in 2006 — and this past spring its even larger size broke records. (FILE PHOTO)

A massive Arctic ozone hole opened up over the Northern Hemisphere for the first time this year, an international research team reported Oct. 1.

The discovery of the “unprecedented” hole comes as the Canadian government is moving to cut its ozone monitoring network.

Environment Canada scientist David Tarasick, whose team played a key role in the report published Sunday in the journal Nature, is not being allowed to discuss the discovery with the media.

Environment Canada told Postmedia News that an interview with Tarasick “cannot be granted.” Tarasick is one of several Environment Canada ozone scientists who have received letters warning of possible “discontinuance of job function” as part of the downsizing underway in the department.

In Sunday’s report Tarasick and his colleagues say the “chemical ozone destruction over the Arctic in early 2011 was — for the first time in the observation record — comparable to that in the Antarctic ozone hole.”

It also highlights the importance of Environment Canada’s ozone networks, which scientists have warned could be drastically reduced. Department officials say ozone monitoring will continue but will be “streamlined” to eliminate “redundancy.”

“The Canadian stations were an absolutely key element of the network of stations we used to do the study,” says co-author Marcus Rex, of the Alfred Wegener Institute for Polar and Marine Research, in Potsdam, Germany. “Canada is the backbone of that network.”

The scientists say maintaining “comprehensive” data is “critical” to understanding Arctic ozone depletion and the threats it poses.

They used U.S. and European satellites, along with ground stations and scientific balloons — including those operated by Environment Canada — to find and track the hole.

“The satellites, ground stations and balloons each provide a piece of the puzzle,” says co-author Kaley Walker, at the University of Toronto. “It is important to have them all.”

The hole formed over the Arctic in February and March, then swung across northern Canada, northern Europe and Central Russia to northern Asia, prompting scientists to issue warnings this spring about excess radiation.

Sunday’s report shows just how big and remarkable the hole was and how it moved. It also points to what scientists are calling “ominous” changes in the Arctic stratosphere, about 20 km above the surface, which may be linked to climate change and increasing greenhouse gas emissions.

Tarasick and Walker are among four Canadian co-authors, who had front row seats as the hole formed. They released scientific balloons, known as ozone sondes, which make hundreds of measurements on their way from the ground to 30 km up in the atmosphere.

The measurements helped confirm that chlorine-based pollutants in the stratosphere, 18 to 20 km above the ground, triggered a process that chewed up molecules in the ozone layer that protects Earth from the sun’s harmful ultraviolet light.

Walker says it was “exciting” as a scientist to see the hole form, but sobering to see how humans are altering the atmosphere.

Extreme and prolonged cold in the stratosphere last winter and spring speed up and enhanced the chemical reactions that destroy the ozone, says co-author Michelle Santee, of the Jet Propulsion Laboratory at the California Institute for Technology. Her group was monitoring the hole from space using satellites.

The ozone-destroying chlorine compounds have been banned internationally, but they are so “long lived” the scientists expect them to stay in the atmosphere for decades.

Rex says it will likely be about 70 years — “a full generation of humans” — before the chlorine compounds disappear from the atmosphere. Meantime a cooling trend in the stratosphere, which is thought to be tied to increasing greenhouse gases like carbon dioxide, could create more ozone holes.

Rex says the spring’s hole “clearly showed us that we don’t have a good understanding of what the Arctic ozone layer will do during the next several decades.”

The scientists say the destruction this spring “attained, for the first time, a level clearly identifiable as an Arctic ozone hole.”

It “far exceeded” any previously observed loss in the Arctic, says the scientists who warn of even more “severe depletion” if temperatures in the stratosphere keep dropping.

They also say “more acute Arctic ozone destruction could exacerbate biological risks from increased ultraviolet radiation exposure, especially if the vortex shifted over densely populated mid-latitudes, as it did in April 2011.” The “polar vortex” is the frigid air mass that circles the polar region in winter and can dip as far south as New York and Rome.

Environment Canada’s media office refused repeated requests for an interview with Tarasick. It sent an email instead saying the information could be attributed to Tarasick.

The email says that UV levels were as much as 60 per cent higher than normal under the hole this spring. The ozone layer recovered in late April and May when winds mixed the atmosphere, but the effects of the hole lingered for months.

There was “somewhat lower ozone over our heads this summer, and higher UV levels (about three per cent to five per cent higher than we would expect if there had not been a hole),“ the email says.

Johnson said the department will still continue to monitor ozone and is “integrating” the two different instrument networks now in place. He also said “sites critical for long-term ozone trend information, including the world’s oldest ozonesonde station in Canada’s far north, will be maintained.”

Rex says he understands the need for budgetary constraint, but takes issue with recent statements by Environment Canada official Karen Dodds who said there is “redundancy” in the existing Canadian networks that can be eliminated.

“There is no redundancy,” says Rex, noting that the current Canadian measurements are essential to the international ozone monitoring program.

“The scientists in Environment Canada are bright guys,“ he says. “They have never wasted money by doing redundant measurements.”