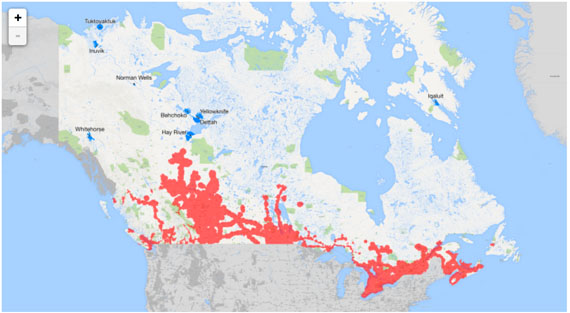 The map shows the Ice Wireless coverage area in Canada. The company now offers unlimited texts, calls and roaming throughout Canada in plans starting at $59 a month and unlimited data starting at $89 a month.

The plan, called Ice Unlimited, is offered in addition to existing cellular packages, which include smartphone plans that offer unlimited texts and calls while roaming throughout Canada, the United States and Mexico.

Outside Nunavut, Ice Wireless customers can use the company’s roaming service on the Roger and Videotron networks in southern Canada, and on the AT&T network in the U.S.

The company said they’re the first Canadian carrier to eliminate roaming charges without having impose daily or monthly add-on charges.

“We are committed to improving our network coverage and accessibility to rural communities while at the same time offering customers peace of mind and freedom to talk, text and roam wherever and whenever customers want with these new affordable plans,” Samer Bishay, the president and CEO of Ice Wireless, said in a news release.

Ice Wireless, started by the Zubko family in Inuvik, offers the service through a partnership with Iristel, a company based in Markham, Ont. that specializes in VoIP (voice over internet protocol) services.

Right now, the company offers cellular coverage in Iqaluit and Whitehorse, as well as in the Northwest Territories communities of Behchoko, Yellowknife, Dettah, Hay River and Inuvik.

The firm launched its cell phone service in Iqaluit in November 2013, offering consumers a local alternative to Bell Mobility.

Their offerings include home and business telephone plans, based on VoIP, that run on their mobile network, as well as a service called Ice Gateway for creating mobile internet hotspots.

“For too long, Canadians in the North have paid outrageously high fees and been frozen out of basic communications services that customers in the south take for granted these days,” Bishay said.

“Not anymore. Our network upgrades and these new affordable plans are a giant leap forward and offering our customers value not seen by Canadians in the south.”

The Ice Wireless outlet in Iqaluit is now located at unit number 4 in the Baffin Gas building.

Information about their wireless plans is available at www.icewireless.com.

Earlier this month, Ice Wireless lost a regulatory battle at the CRTC, when the telecom watchdog ordered Ice Wireless to stop customers of its subsidiary, Sugar Mobile Inc., from roaming on Rogers’ network.