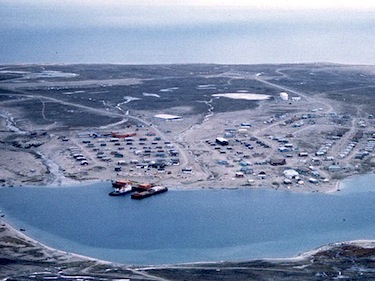 Nunavut police are investigating a suspected case of vandalism at Gjoa Haven’s tank farm this past weekend that may have drained the western Nunavut community’s aviation fuel supply.

On Feb. 25, the RCMP members in Gjoa Haven learned that there had been damage to the community’s fuel pump station. Police later discovered that the main tank farm had been vandalized.

A “significant amount” of aviation fuel had spilled outside the farm, the RCMP said in a Feb. 27 release.

An estimated 200 litres of jet fuel is believed to have spilled from the tank farm, though the fuel has been contained to an area of 20 square metres, a spokesperson for the Government of Nunavut’s Community and Government Services department told Nunatsiaq News Feb. 28.

The local co-op is leading the cleanup effort, the GN said, while regional officers from the Petroleum Products Division are scheduled to arrive in Gjoa Haven Feb 28 to help with those efforts.

The pumps for regular gasoline and home heating fuel weren’t affected in the incident, the RCMP said.

Gjoa Haven police are now asking anyone with information about this incident to contact their detachment directly at 867-360-0123. Nunavummiut can also call Crimestoppers anonymously at 1-800-222-TIPS.