“When you hear the terror, there was some realism there” 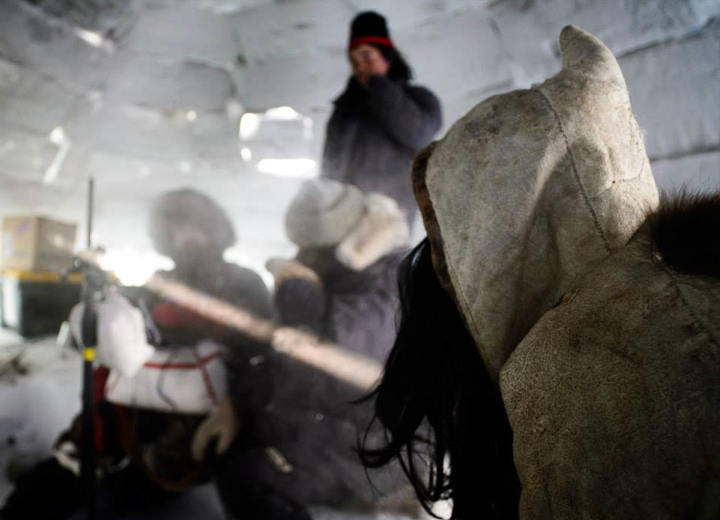 A scene from the Kinguliit production of Maliglutit, a new Zach Kunuk feature currently under production near Igloolik. (PHOTO BY AJ MESSIER)

When it’s 3 a.m. and you’re naked inside your caribou skin sleeping bag in an iglu and the windchill has pulled the temperature down below -50 C and the director yells “action!” and actors playing the bad guys smash into your iglu and rip you from your blankets, those screams you scream are real.

“Yeah, when you hear the terror, there was some realism there,” said Jonathan Franz, producer and director of photography for Maliglutit, the latest Kingullit Productions feature-length drama currently being shot outside of Igloolik.

“We do our best. We have a heated tent and heated blankets just outside,” he said. “We got it in one take. But yes, we had a few nights like that, long and cold. But so far, no problems on the technical side and the actors have been troopers.”

It’s a working title, Franz said, because they’re still trying to find an Inuktitut word which means something closer to “The Searchers,” which is the English title.

On March 17, they’ll pack up again and head to Avammuktulik, a bay on the mainland about a half hour by snow machine, to set up camp and shoot the next batch of outdoor scenes. That should take about six days, if weather permits, Franz said.

Maliglutit will be more action-packed, Franz said, and less dialogue heavy than the last film feature Kinguliit made — The Journals of Knud Rasmussen.

This will be a story of kidnapping, murder and revenge, all done in Inuktitut and set around 1913 in north Baffin.

As in all Kinguliit projects, like Isuma projects before them, the film provides a valuable opportunity to mentor young people interested in the industry.

Costumes, many of which have been reworked from previous productions, are all made locally and design and production always involves both elders and youth so sewing skills and cultural components can be passed on, Franz said.

“The most impressive scene so far was the ice iglu scene where we had all the extras there and meat hanging from the walls and drum dancing and singing — you felt like you were time-warped into the early 1900s on this crazy landscape with authentic actors and clothing,” said Franz.

He says when he looks through the camera lens, he doesn’t see the dozen people with boom microphones and lights and headsets behind him. He just sees the scene in front of him and it can be surreal.

“For me, as an outsider, it was pretty powerful.”

Atanarjuat veteran actors Natar Ungalaq and Lucy Tulugarjuk, who are in the film, are helping to mentor young actors as well.

Most of the actors are in their mid-20s and are completely new to the business, Franz said.

“It’s a learning curve in a lot of different areas but so far it’s going well. They’re getting into their roles,” Franz said. “That’s the most important thing, that people are keen and excited about the project. The skills and the other things come with time so long as there’s commitment and enthusiasm for the project.”

After shooting at Avammuktulik, the crew plans to come back to town again, rest and regroup and then travel to Avaja, a small group of mountainous islands northwest of Igloolik. After that, they will only need to shoot a short spring scene and the filming portion of the production will be complete.

Franz and Kunuk are hoping to have a final edit of Maliglutit ready in the fall and have a brand new feature film completed by the end of 2015.

The Toronto International Film Festival has already expressed interest in screening the film next year but Franz said the finished production will first have a debut in Igloolik.